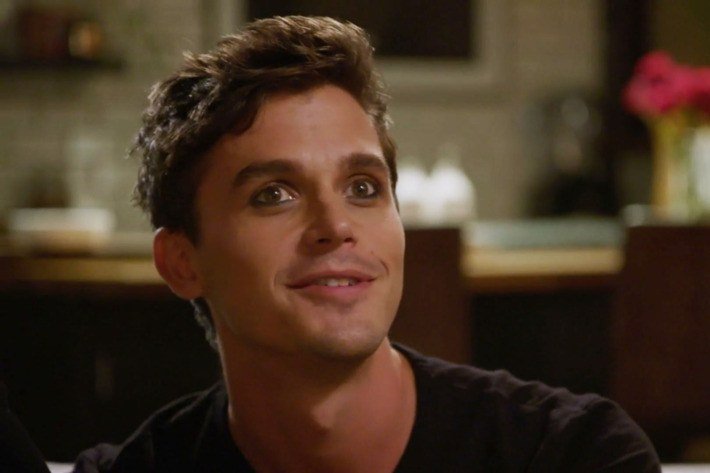 The indelible Jonathan Van Ness isn’t the only grooming expert on Netflix’s Queer Eye — every single one of the Fab Five has beauty tips we want to get our hands on, henny.

If you’ve been following the show (it is changing hearts and minds all over the world, people!), you’ve probably noticed that all five guys — culture expert Karamo Brown, design expert Bobby Berk, fashion expert Tan France, food expert Antoni Porowski, and grooming expert Van Ness — have flawless skin. In the first season, Van Ness preached about the powers of a good color-correcting green stick but in season two, the Fab Five appear to be embracing bolder makeup lewks.

In episode 5 (in which the guys do a makeover for a trans man named Skyler), both Antoni and Bobby are giving us major Green Day vibes with some subtly punk eyeliner. “The idea was that since Skyler was the subject, we wanted to play with [the Fab Five’s] looks a little bit more this episode,” Queer Eye makeup artist Marina Fisher Soto told The Cut. Here’s exactly how Soto created the “Kurt Cobain/River Phoenix ’90s grunge look,” on Antoni and Bobby.

1. Moisturize: In any makeup routine, Soto knows creating a perfectly moisturized canvas is key. “The first thing I did was put moisturizer on the guys because when you put makeup on without moisturizer, it tends to cake up,” she said. She uses Diamond Skin Care Hyaluronic Moisturizer ($55) on the Fab Five because its light texture doesn’t get greasy in the Atlanta heat.

2. Conceal: Next, Soto worked a little baby concealer magic with Cover FX Cream Concealer ($28). “You basically pat on a tiny dot with your middle or ring finger under your eye until it blends in,” Soto said. This part of the guy-liner look is key. “The concealer part is pretty necessary so that you get the contrast with the actual eyeliner,” she said.

3. Boost your brows: Just like the rest of us, the Queer Eye guys need a little brow boost from time to time. “This part isn’t absolutely necessary, but since Bobby’s eyebrows are so light — almost blonde — it just needs a bit more emphasis, so the eyeliner doesn’t look so harsh on its own,” Soto told The Cut. She used Benefit Gimmie Brow+ Volumizing Eyebrow Gel ($24) to define their arches.

4. Add eyeliner: Finally, the moment we’ve all been waiting for: time to line. To get that perfect '90s grunge moment, Soto used Urban Decay 24/7 Glide-On Eye Pencil ($21) on the waterline of the eyelids (aka the “wet” part). “For something a bit more dramatic, you could also draw just underneath your lashes at the bottom of your eyes,” she explained. For Antoni, Soto made the look even more dramatic by smudging the liner with the Morphe M508 Smudger Brush ($4). “With Bobby, we didn’t smudge it at all because it would’ve been too much — but if you really want your eyes to pop like Antoni’s, then you can go in with the brush just along where you drew under your lashes and start smudging it downward, maybe about a half-centimeter.”

Related posts:
07/07/2018 Beauty & Balance Comments Off on This Grunge Eyeliner on "Queer Eye" Is Giving Me Life
Diets News