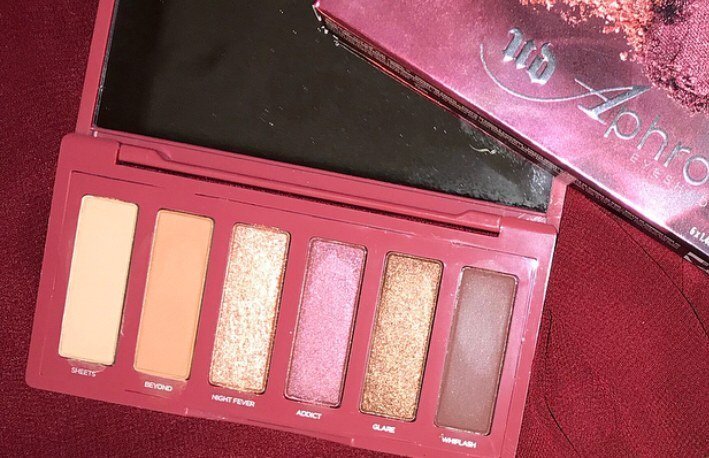 Urban Decay knows what the people want: a new eye shadow palette nearly every month. Some fans of the brand look forward to new palettes so much, you might even consider the launch announcements and previews something of a turn-on. And that's especially true of the palette that's reportedly coming soon: Aphrodisiac.

On Wednesday, Instagram beauty sneak-peeker @trendmood1 reposted a photo from the aptly named @swatchyswatchy showing an open palette of six shades next to a forearm full of swatches and a box reading "UD Aphrodisiac Eyeshadow Palette." Although neither account shared any details in their captions — no shade names, no launch date, nothin' — we can deduce a few things.

First of all, shades appear to be a mix of mattes and intense shimmers in the rose-gold family, and zooming in reveals the names. The shade Sheets appears to be a matte beige; Beyond is a light, brown-leaning peach; Night Fever looks like a shimmering version of Beyond; Addict is a shimmery fuchsia; Glare is a metallic, golden brown; and Whiplash is a rich, plummy brown. As one of the commenters noted, the swatches and pans look a little different in color than the photo on the box, but there's no denying that it's a gorgeous combination.

We can also deduce that there's a lot of excitement over this new palette, from the looks of the comments. "Oooh I’m obsessed," one commenter wrote. "I got to admit I appreciate how soft and wearable they look," another said. Some compared its shades to that of other palettes, including the Anastasia Beverly Hills Norvina palette and the ColourPop Pretty Much palette. It's also worth noting that one commenter wrote, "It will be an Ulta exclusive as well," but we can't confirm how they know this or if it's even true.

We've reached out to the Urban Decay team for more details but have yet to hear back. We'll update you as soon as we have more official info to share.

Related posts:
07/20/2018 Beauty & Balance Comments Off on Looks Like Urban Decay Is About to Launch Another Six-Shade Eye Shadow Palette
Diets News