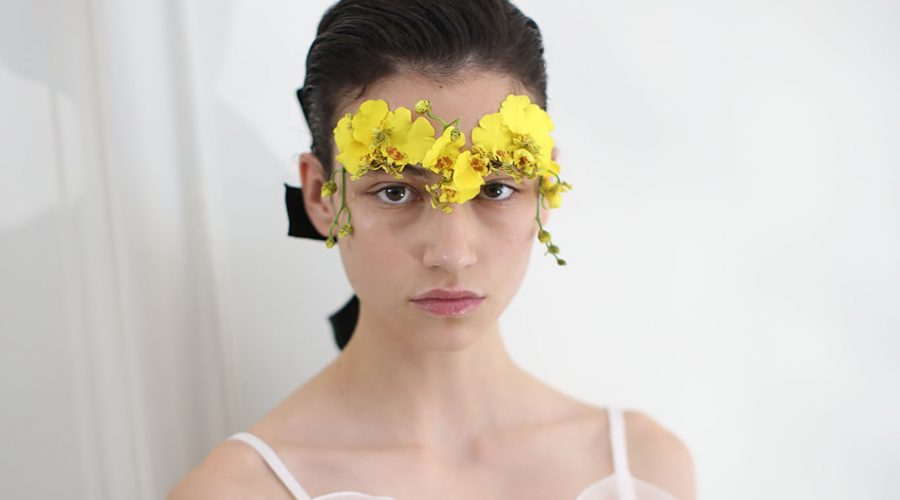 PARIS — Peepers popped on many a Paris Fashion Week runway for spring 2020.
That’s not to say natural looks disappeared — they were still in full force this season yet again. But when eyes came into focus, makeup artists worked their magic, crafting highly imaginative creations.
Isamaya Ffrench applied live flowers over eyebrows of 15 models walking the Giambattista Valli show, while Pat McGrath used gold-colored crystals, stones and glitter to ornament eyes and brows at Valentino.
Silver glitter was swept onto lids at Balmain and Lutz Huelle, and a more graphic take was noted at Mugler, Anaïs Jourden, Each Other, Courrèges, Olivier Theyskens and Ann Demeulemeester.
“After so many seasons of brands and retailers alike focusing on the lip category, eyes have come back to the forefront,” said Lan Vu, founder and chief executive officer of beauty forecasting service Beautystreams.
“With the spread of the green movement, natural, bare faces have been widespread. But amid all the clean, minimal makeup, a dose — or overdose — of glamour is a welcome antidote,” she continued. “In line with this season's Seventies inspiration, eyes surface with extravagant glam rock and disco looks. Glitter comes chunky and oversize, rather than in fine flecks in bold, graphic shapes. The Eighties also usher in decadence and opulence as gilded styles recall ‘Dynasty’ extravagance, baroque influence and masquerade balls."
Source: Read Full Article