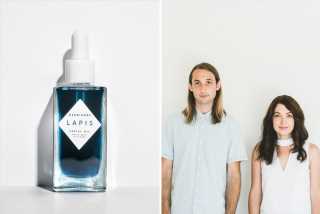 Indie skin-care brand Herbivore has raised a $15 million Series A investment.
The round was led by Silas Capital, which also backs clean skin-care rand Ilia, with participation from S1 Fund, a new consumer-focused venture fund.
This is the first outside investment for Herbivore, which was founded in 2011.
Herbivore founders Alex Kummerow and Julia Wills started the brand out of their Seattle kitchen after buying a $50 soap-making kit, Wills said, as the two have long been interested in natural personal-care and beauty products. Gradually they started selling their products at farmer's markets and Etsy, before branching into more traditional retail channels.
Herbivore is known for its natural formulations and simple, chic packaging, which Kummerow and Wills designed before Instagram-fueled minimalist branding hit the mainstream.
"That really let us stand out on Etsy, actually. Everybody was in the granola crunchy space, and we're kind of like granola crunchy people who love beautiful things," Kummerow said in an interview.
Face oils from Herbivore Botanicals.
These days, Herbivore is best known for Emerald CBD + Adaptogens Deep Moisture Glow Oil, $58; Blue Tansy AHA + BHA Resurfacing Clarity Mask, $48; Bakuchiol Retinol Alternative Smoothing Serum, $54; Lapis Balancing Facial Oil, $72, and Pink Cloud Rosewater Moisture Crème, $48. The Cloud Crème was recalled earlier this year in Canada because of mold, but industry sources noted that issue has since been resolved and that the brand is growing.
Sources noted the brand is on track to do about $50 million in retail sales for 2019.
Kummerow and Wills started out by researching ingredients they hadn't seen being used in beauty and experimented with coloring their soaps with clay. Gradually they moved into facial skin care, which is when the brand really started to take off.
"We wanted to shift the culture of the market," said Wills, who worked as an addiction counselor before starting the brand. "We wanted people to want natural products, we wanted to provide them for people, and we wanted to make them accessible." While she had no prior beauty experience directly, her mother was an aesthetician who championed naturals.
Kummerow, who worked in video production before jumping into beauty, said he has always been centered around the company's small goals. "My favorite part about running this company is those tiny victories you get. You always set that next goal, and so when we were selling at farmers' markets it was kind of like, 'I would love to see this in some cool shops,' and then we'd set that goal and it would get into shops, and then we were like, 'oh, I wonder if we could get this in some bigger box stores?'"
They did. Now the brand is sold at Sephora, Nordstrom, Credo, Space NK and through Carbon Beauty on Amazon.
The business has been buzzy for years, and investors have been approaching Herbivore since 2015, when it landed in Sephora, Kummerow said.
"It was our goal to hold on to our baby. We wanted to hold onto it for pretty much as long as we could. We have spent the last few years looking for the right partner because we knew there would come a point where for us to really get to the next level, some outside capital and some industry connections could really be beneficial for us," Kummerow said.
Now that the duo have signed new investors, they are focused on Herbivore's next phase, which will include hiring more management, building out digital marketing efforts and potentially, a retail store.
"We feel like our brand is so sensorial and there's a lot to it we feel like we can make a really great space that showcases the brand," Kummerow said. The location is still up the air, Wills noted — Seattle, where Herbivore is headquartered, is on the table, as is San Francisco. "But it could also be somewhere else," she added.
"We hope to be able to focus on creative endeavors for the brand, to expand the brand and brand awareness," Wills said.
For Silas, a firm that aims to combine beauty and e-commerce expertise, Herbivore's natural positioning was appealing, said Brian Thorne, a partner.
"Given our investment in Ilia, we've seen first hand the growth of clean at Sephora," Thorne said. Herbivore, which is now merchandised with the other clean brands, will likely "lean a little bit heavier into the Sephora relationship," Thorne said, noting that there, the brand is nearly as productive as Drunk Elephant or Tatcha.
Silas also plans to help the company increase online sales. The brand already has significant online sales now, he noted, "but spend very little on digital to drive that."
Thorne also noted the brand's possibility to expand across categories, saying the CBD product had done really well, and that with "herb" as part of the title, it's possible Herbivore will move further into the CBD space.
"The brand has a lot of permission to expand across categories in the clean and wellness space," Thorne said.
Source: Read Full Article