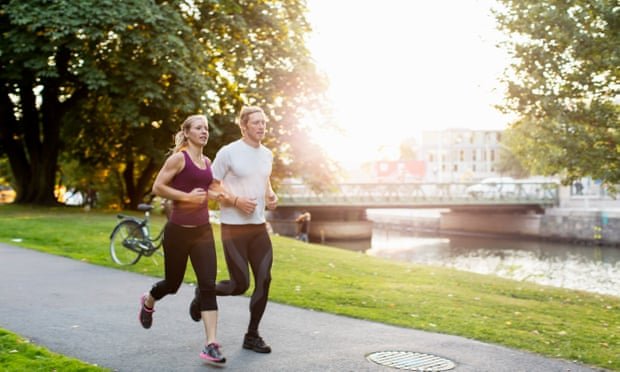 Fingers frozen solid, I stagger light-headed through the front door, ecstatic that I have managed to avoid a coughing fit on my latest training attempt. My skin is still emitting its post-run Martian-red glow when my husband eagerly chirps: “What was your time, what was your time?” Bursting with good intentions, he has taken a supportive interest in my running regime since I pledged to run 1,000km in a year.

Until the beginning of 2017 I had been a light runner, plodding about four miles a week at a leisurely pace. But inspired by friends on Facebook, I committed to the 12-month challenge and took part in my first half marathon in May, followed by a triathlon in September. My fitter, stronger other half, who runs two miles every weekday before 6am and lugs huge pieces of wood around at his cabinet-making workshop, has been eagerly tracking my training. So much so that earlier in the year we decided it would be a great idea to go for a run together one afternoon, while our boys were being entertained by grandparents.

The simple but golden rule, which we had somehow erased from our memories, was that we should never go running together. Ever. Through the haze of children, work and washing, we had forgotten about our two previous attempts, which had ended in disaster. Despite being together for 17 years, we are one of those annoying couples who never argue – but this was the exception.

And so history repeated itself. Halfway around our silent four-mile route, I blurted out: “You can talk to me, you know!” Taken aback, Mark explained that on our previous running attempt I had specifically asked him to stop talking as I was too out of breath to respond and had found it demoralising that he could run and speak and I could not. “Well, I am better at running now,” I retorted. “Can’t you tell?” So, Mark started chatting about how his legs were hurting because he wasn’t used to running at my (slow) pace and perhaps I should try to mix some sprinting and jogging to increase my lung capacity. To make things worse, at the final stretch, Mark hollered: “Come on, sprint – you can do it!” which I took as the highest form of condescension, and slowed to a shuffling trot in protest.

By the time we reached home I was fuming, accusing him of treating me like his training guinea pig, and of a complete inability to understand my level of fitness. “You just don’t get it,” I screamed. He laughed, bemused at why I was so angry at his “encouragement”. Subsequently, we agreed never to run together, although that doesn’t stop Mark from giving me tips – even though he has never run long distance before.

It all raises the question: why does running turn into a battleground for otherwise placid couples?

According to Prof Joan Duda, an expert in sport and exercise motivation at the University of Birmingham, an exercise buddy can promote sustained involvement in physical activity. But this relies on three factors: competence, autonomy and belonging. “When running, you want to set the stage so you are more likely to feel competent, and feel a sense of autonomy – like you have a voice, choice and input. And you need to have a sense of belonging with the person with whom you are exercising. It is best to feel you are being supported in a nonjudgmental way.

“When you have all of those conditions in place, running together should be a more positive experience and one that adds rather than distracts from your wellbeing. But if you don’t have these factors when running with your partner, things can go pear shaped.” As a competitive tennis player, Duda is all too aware of the tension between competing couples: “I have seen couples on the verge of divorce over playing tennis together. But it doesn’t need to be this way.”

The predicament, clearly, is not exclusive to running, or indeed tennis (the only sport I can take part in with my husband, as we are both equally hopeless at it). Even Davina McCall workouts are not safe – my brother-in-law gets infuriated when my sister advises him on how to lunge without injury. And the same outcomes seem inevitable on the ski slope. Science writer Emma Wilkinson says: “On my first day skiing with [my partner] Mark as my teacher, I ended up in a heap at the bottom of a run, streaming with tears and refusing to move.”

My friend Angie Simms says: “Never get snowboarding lessons from your partner. On top of a mountain, upside down in a pile of snow, crying and cursing is the only way that day will end.” The couple are blissfully happy running a photography business together on a remote island – but sport and snow are a no go.

Nor is it solely men “slowing down” for their partners – it can be the reverse. My colleague Richard Wilson, 44, told me he was delighted when his wife offered to help him train for the Great North Run, but within seconds he was asking her to slow down. “She kept powering off and we were having little bickering rows. I was being stroppy saying, ‘You’re not even doing the race this year.’ I was playing catchup all the time. She would run to the top of a hill before me and make jokes as I huffed and puffed up. But I had no breath to respond to her jibes.”

But the best story I have heard is of my husband’s friend – a personal trainer with a £50,000 purpose-built gym in his home. To his amazement, his wife announced the other day that she wanted to get fit again and was thinking of joining a gym. Exercise and marriage, clearly, don’t always mix well.

And yet as I reflect on the recent completion of my 2017 resolution, I feel that maybe, just maybe, I should have another go at running amicably with my partner. Perhaps that can be the 2018 challenge.

Related posts:
10/03/2018 Fitness Comments Off on Why couples should never go running together
Diets News