It is not often that runners deliberately dawdle because the trail is so incredible they don’t want it to end, but by the penultimate stage of the Mustang trail race, that is exactly what I was doing. Running down the Siyarko Tangk Danda ridge that afternoon, the route was perfect underfoot – a soft, dusty yak track, descending on a gradient that was doing most of the work, allowing my legs to spin along below me. My gaze was running the full length of the Kali Gandaki valley, beginning between the giant Annapurna, Nilgiri and Dhaulagiri peaks, and stretching north to the Tibetan plateau, where the curvature of the earth was clear on the horizon. I was just a kilometre above Chuksang village, where sweet tea and company were waiting, but I didn’t want to come down! Each switchback in the path was making me exclaim with wonder. At times, the trail was just a metre or so wide, with a sheer thousand-metre drop into the canyons below, and I was looking down on eagles circling. 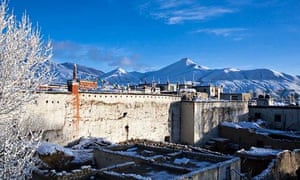 After seven days on the trail, my body was finally growing accustomed to running at altitudes of over 4,000m. It had been like learning to run all over again, having to realign the relationship between my limbs and my breath, and to revise my heart’s expectations. There were mornings when my legs seemed to belong to someone else, and it would take an hour of climbing before they stopped wobbling. In the afternoons, Mustang’s famous winds swept through the canyons, whipping all the moisture from my breath and skin, leaving me parched and croaky. Run too slowly and you would find yourself caught in this daily dust storm, bent double into the salty wind on the high passes, having to wrap cloth around your face for protection. 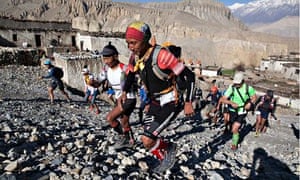 Hidden behind the near-impenetrable wall of Annapurna and Dhaulagiri, this secretive former kingdom was closed to foreigners until 1992 and today the $500 (£296) permit and the lack of infrastructure keep trekkers and tourists to a minimum. In eight stages, we ran over multiple 4,000m passes to and from the ancient walled city of Lo Manthang, where yaks, mules and goats seem more prevalent than the 1,000 or so resident Loba people. The town is strung with prayer flags, and made up of narrow alleyways surrounding the typical Tibetan palace, with its thick, tapering walls. Although a bumpy jeep road is being constructed through Mustang, the majority of traffic remains by horseback and mule.

For the event’s directors, Richard Bull and Dhir Priya, the race was as much about seeing Mustang as it was about creating a competitive run. Nightly briefings included instructions such as ‘Don’t forget to stop and look behind you!’ and ‘Make sure you spin the prayer wheels!’, and race days included pauses at the monasteries and intricately painted cave temples dotted throughout the orange cliffs and river valleys. 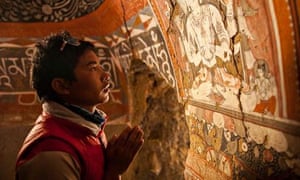 Race entry criteria were more sense of adventure than impressive running CV, and the 25 runners varied widely in ability, athleticism and age. A third of the field were women, including two Nepalese women, Mira Rai (22 years) and Yam Kumari Rai (17 years), who came fourth and sixth respectively. Both women fell into trail running: Mira has a track background but randomly entered and won the Kathmandu 50km race in March, bringing her to the attention of Trail Running Nepal; Yam Kumari has built up her incredible stamina by running over mountains for six hours to and from school every day. Both runners tell of how their initially doubtful families now speak proudly of their pioneering daughters (to support them click here).

The competition among the front-runners was intense, but largely unwitnessed and undocumented apart from by a few wool-spinning villagers and many mountain goats. Last year’s winner, Upendra Sunuwar, eventually triumphed, finishing the 200km course, with 8km of ascent, up to altitudes of 4,300m, in just 17h 12m 57s, beating his previous time by more than two hours. 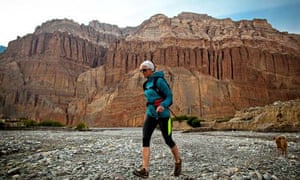 The penultimate stage ended in the village of Chuksang, where we smelled the first greenery for several days, and were granted brief respite from Mustang’s winds in the sheltered courtyard of the Lotus hotel. Here we had our first showers, skin emerging pink and windburnt once we had sloughed off all the dirt. Beds with white cotton sheets were a luxury after nights under coarse, dusty blankets smelling of cattle and mules. With just one remaining stage consisting of a 1000m climb and 17km race over the Gyu La pass to Muktinath, a sense of relaxation and ease had settled over the group and I chatted with runners about the experience. All described the sense of discovery, of the place and of the mountains, but also of our own limits, our edges. For some, the race had been about getting back to simplicity. For others, it was the sense of contrast: the strength and energy we demanded of ourselves, while also confronting our fragility; the wildness of Mustang’s storytelling geology, against the implausible delicacy of its ancient cave art; the daily solitude of the trail, against evenings of warm companionship.

On the final day, the race itself over, I embarked on the unmarked, 15km stretch back towards Jomsom. As I reached the final pass, it was late in the day and the snow-clouds were gathering. I had tired legs, was unsure I was en-route, and nervous about the vertiginous 500m descent to the village of Lubra – but I had lightness in myself. I found a round stone lying on the pass under the whirring prayer flags and placed it on the mani pile, in thanks to Mustang, to the trail and to newfound-friends.

• The next Mustang Trail Race will take place in April 2015