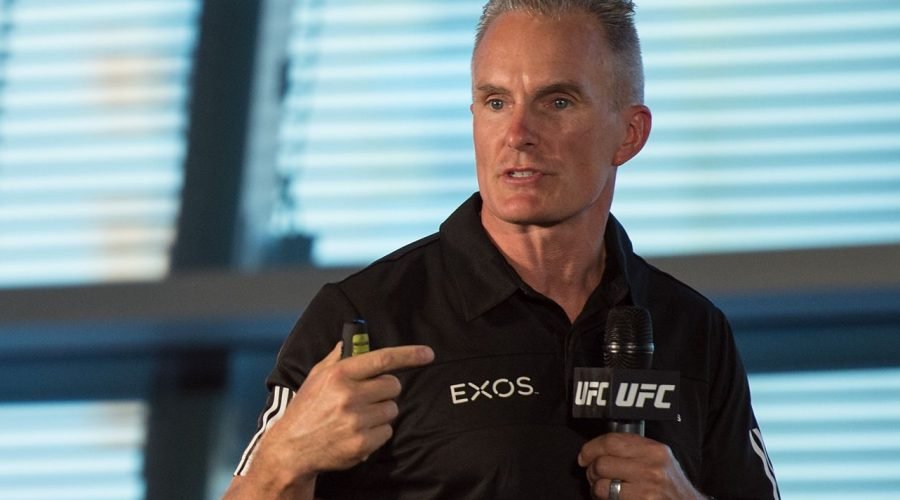 At no other gym would you find Navy SEALs, NFL players, Olympic runners, members of a national soccer team, and UFC fighters rubbing shoulders. They’re all drawn to Exos, a high-tech performance center, headquartered in Phoenix, that is the world leader when it comes to “optimizing the human operating system,” as its founder, Mark Verstegen, M.S., C.S.C.S., puts it. “Upgrading lives, wherever they need to perform—on the field, in the boardroom, or at home—is what we do.”

Since the company’s start as Athletes’ Performance in 1999 (the name was changed to Exos in 2013), Verstegen has pioneered how elite athletes prepare and repair. The Washington State linebacker and strength coach developed a system with “four pillars” of performance: movement, nutrition, recovery, and mindset.

Movement training focuses on function and balance rather than brute strength and raw endurance, since research revealed that imbalances and mobility dysfunction are the root cause of many injuries. That impacted both gym design and workout structure. It meant turning half the gym into a turf field for pushing sleds and doing moves like walking lunges. He also prioritized your body’s pillar—hips, torso, and shoulders—and emphasized rotational training, often using Keiser machines. Nutrition homed in on whole foods and balanced macronutrients. Recovery emphasized the importance of letting your muscles heal and adapt, especially through sleep. Mindset tied it all together, helping clients understand why the principles mattered and how to live them 24/7.

In the early days (and still today), Verstegen deployed this approach with football players preparing for the NFL Combine and produced startling results. Nearly 50 percent of first-round picks in 2018 trained using Verstegen’s system. “Mark was the first to talk about the importance of functional-movement screening in 2001, not just in how the athlete performs but in how they get injured and how they may be set up for other injuries because of how they move,” says Thom Mayer, M.D., medical director for the NFL Players Association. (Verstegen is its performance director.) “Fast-forward 15 years and you see NFL physicians at the combine focusing on movement patterns—foot and ankle changes, the same thing with hips and the shoulders. It’s not just the system he’s created; it’s his ability to see the interrelatedness of things.”

Other coaches and managers in the sports world and beyond soon realized that the same system could help keep their high-dollar players healthy, improving both performance and career longevity. In 2006, Exos started working with the U. S. Navy and Special Forces to help develop and protect their “human capital.” By applying the Exos system, the military is able to better prepare soldiers for deployment, help them return to duty following injury, and assist their transition back to civilian life. “I don’t know what I would have done without help from Mark and Exos,” says former Navy SEAL Marcus Luttrell, author of Lone Survivor and an Exos regular. “I might have ended up in a wheelchair” due to injuries he sustained in Afghanistan. Luttrell now visits Exos at least once a year for several weeks.

It wasn’t long before corporate America and Fortune 500 companies like Adidas and Humana came knocking, looking for a performance edge. Like professional sports and the military, they knew that success rests on the shoulders of their personnel. Optimal productivity requires employees who are fit, healthy, and motivated. Even more urgent, escalating health-care costs, particularly post-recession, were becoming a massive drag on budgets. Verstegen knew you couldn’t simply step in and train office workers, some of them “nonmovers” grappling with health issues, the same way you did elite athletes. The key was delivering individualized programs—or “personal game plans,” as he likes to put it—in a way that was effective under the circumstances (busy schedules, physical limitations, etc.). Enter Exos Journey in 2017, an application that creates and manages employee fitness programs, based on the four pillars; it can be deployed at almost any location with a few basic fitness tools. In some cases, Exos has placed trainers and chefs on corporate campuses to provide additional support. It found that employees were more likely to embrace the system with assistance and encouragement from a trained professional. The need is critical because research shows that most existing employee-wellness programs have no discernible impact on employee wellness.

Exos currently employs more than 4,500 people at over 400 outposts globally. The same solutions are now making their way into the public-health system thanks to a collaboration with the Mayo Clinic. At its Rochester, Minnesota, headquarters, there is a full Exos-designed and -staffed training center, with Exos providing training for both staff and patients. Consider a recent Exos innovation, the 3D Movement Quotient, which uses video analysis and markerless biomechanics to assess movement quality instantly and set up training protocols right away (rather than in weeks). This allows it to be used more often and more widely. It’s just one of the tools Exos is creating to help greater numbers of people improve mobility and resolve pain.

Verstegen, now 49 , says he feels a responsibility—a word he uses often—to bring his four-pillar system to as many users as possible. He’s not just interested in assisting elite populations; Exos, he believes, can help fix what he describes as a national crisis. “Reactive health care is broken,” he says. “Seventy percent of the issues clogging our health-care system are lifestyle-related. If we can remove them, if we can get people upstream of the disease state, it’s a win-win for everyone.”

Do these Mark Verstegen-approved exercises to build superior core strength.

Grip a dumbbell or kettlebell in the rack position. Squat and then stand, then press the weight straight up from your shoulder. Perform 5 to 10, then switch sides and repeat. Do 3 sets.

Side plank with Cable Row

Get into a side plank (propped on an elbow, hips raised), holding an exercise band looped around an anchor. Raise your top leg. Grip the band and do a set of 5 to 10 rows. Switch sides and repeat. Do 3 sets.

Related posts:
11/09/2018 Fitness Comments Off on The Smartest Man in Fitness Wants to Solve the Obesity Crisis
Diets News