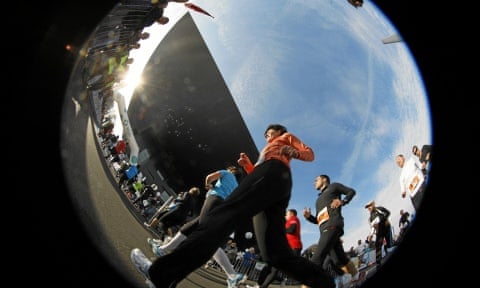 Two of the UK’s best and hilliest (some connection, surely) marathons were held at the weekend, in Snowdonia and Beachy Head, but for my comeback race after a succession of football injuries (note to self: thou shalt not cross-train) I needed something a little flatter, so naturally I headed to Switzerland.

Luckily, the SwissCity marathon is in Lucerne, and mainly concerns itself with winding prettily along the side of a gorgeous lake, so my only real uphill battle was against my lack of training. I solved the problem of being nowhere near marathon PB shape by the simple expedient of transferring to the half, but that still left another problem: I was nowhere near half marathon shape either.

What do you do when you start a race without a proper target to get your teeth into? I can just about bully myself into running a low-priority 10k or parkrun hard, but 13 miles is a long way to feel bad. I tried to soak up the scenery and enjoy the feeling of running again but my brain, unaccustomed to having thinking space in a race, kept letting me down: perhaps the loveliest part of the course runs for several miles almost right on the shore, but all I could think about for that whole section was not being able to spot a bin to throw my gel wrapper into, and that the exact same thing had happened to me last year. I can’t let it happen again, but bin reconnaissance is not something I ever thought I’d have to make part of a pre-race routine.

If there’s one thing you can rely on in a Swiss race, it’s timing. Pace groups are par for the course in most city marathons, but nowhere else have I seen graphs provided in advance outlining how the pacers plan to tackle each section of the route, accounting for all the inclines and declines. I found myself in a pace group led by a man called Toni, who was dragging hopeful runners behind him like the tail of a comet. I thought about asking Swiss Toni how that felt (“Ah, you see, Ben, running a nice, even-paced marathon is like …” No.) but happily free of stopwatch tyranny for a change, I finally managed to find my own rhythm and rode it home to the finish feeling … well, not too bad, considering.

I hope you all had a good weekend run or two, but whether all went to plan or not – and especially if there was no plan – let us know below the line.

Related posts:
09/29/2018 Fitness Comments Off on Running blog: how was your weekend running?
Diets News