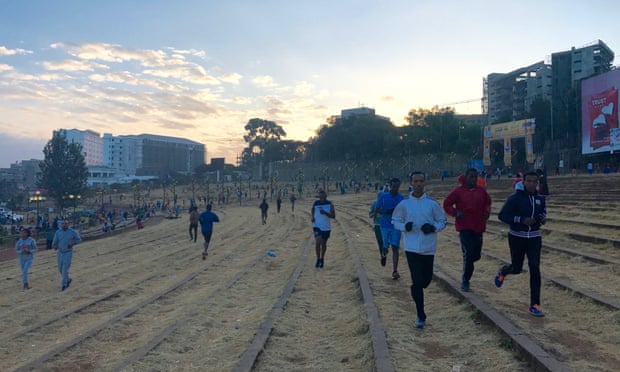 The first thing I do on arriving in Addis Ababa is throw up. Right there on the airport asphalt, a grotesque, liquescent version of the papal terra firma kiss. A kind lady passes me some water. I accept it gratefully, and then return it involuntarily via the window of my taxi from the airport. At the hotel, there is no record of my booking, but I look so sickly that the receptionist quickly passes me a room key. She wants me gone before I scare her guests, I suspect. A fitful, feverish night lies ahead as my lunchtime salad completes its dirty work.
Not the best preparation for my introduction to Ethiopian running, for sure. Woken by my alarm at dawn, I don’t even contemplate reaching for my trainers. Head fuzzy, throat parched, it is as much as I can do to crawl out of bed and dress myself. I would not be beaten, however. With 36 hours in the Ethiopian capital, I had booked myself into a hotel close to Meskel Square, the downtown gathering point for the city’s joggers. I steel myself for the walk. When I arrive, still pale and shaky, I’m struck that Meskel Square is not really a square at all. More of a crescent, really. Narrow, with the gentlest of curves, Addis Ababa’s best-known spot for running comprises a series of banked terraces, each measuring about one metre in width and about 600m in length. There are 40 or so in total, a low stone kerb demarcating one from the other. Picture a row of swimming pool lanes affixed to a sloping Nascar track, and you’ll be close to the mark.

The sun has only been up for about 20 minutes, but the “square” is already busy. I wander along one of the lanes, my dragged feet kicking up dust from the earthen track. Advertising hoardings scream down from above the uppermost terrace. Most are for banks and beverage firms, but one is publicising the upcoming 21km Great Ethiopian Run. The event has the support of Haile Gebrselassie, the country’s marathon ace turned affluent businessman. His moustachioed face smiles out from another hoarding across the way, a can of Total engine oil grasped proudly in his hands. 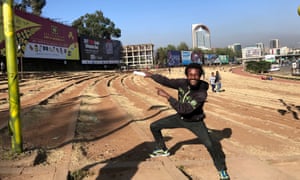 It is not long before Solomon finds me. Sporting a scraggly beard and worn trainers, he introduces himself variously as an assistant coach, street artist and student. He seems to have a low opinion of Meskel Square. The serious runners, he tells me, train in the nearby hills or at one of the capital’s few athletics centres. “Only amateurs here.” That’s more my tribe, I assure him, and ask if he can introduce me. Am I sure? “Sure, I’m sure.”

Scratching his head, he obliges all the same. The first gentleman he stops has a bicycle and a tatty pair of yellow, unbranded trainers with a gapping split along the bottom. Aged 29, Aschallew is an odd-job man. He’s already done an hour’s endurance work this morning, and is getting ready to cycle home. The bike saves him money on public transport, he explains. His favourite distance? “10,000 metres.” His personal best? “Thirty-one minutes, 14 seconds.” My sense of amateurish kinship disappears in an instant. 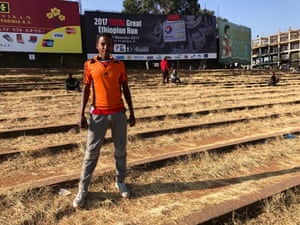 Eighteen year-old Abdi makes a similarly precarious living, delivering “urgent messages” between local businesses in the outlying district where he rents a shared room. Recently arrived from the countryside, his attire is even more threadbare. Yet he, too, is as swift as the wind. I had watched in slack-jawed admiration as he sprinted a length of the Meskel Square track. He looked like a 100m runner. I inquired how many laps he’d done. His response: 16.
“I run mostly for my health, and to have a good life by having a good morning’s exercise,” he says, when I enquire about his motivation for running. The question elicits more or less the same response from all those I ask. And would he like to be a professional one day? He smiles, coyly. Solomon breaks into the ensuing silence, pointing up at the billboard image of Gebrselassie. “He is having too much investments nowadays,” the friendly coach-artist-student declares. “So your question, it is so very obvious.”

I return at dusk the same day, my stomach still tender but somewhat becalmed. I still cannot face running. So, instead, I take a seat beside a flight of stone-flagged steps that bisect the terraced track towards the far end of Meskel Square. Behind me is a large gated compound. In front, the standard bedlam of most major African cities: a traffic-choked highway, a jumble of shops and offices, a smog-laden skyline, and an overland metro built by the “cheap Chinese”, to quote Solomon.
Amid the chaos, Meskel Square offers a rare oasis of calm. You sense the citizens of Addis Ababa flock here as much to escape life’s daily grind as to get their daily dose of exercise. Not that the two pursuits are so far apart, of course: worldly worries temporarily set aside for an hour or so in the freeing fog of physical activity. Whatever people’s cause for coming, their commitment to it is absolute. Up and down the runners go, patiently churning out lap after lap in the cool evening air. 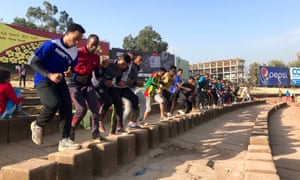 Meskel Square is nothing if not ecumenical, mind. Alongside the joggers, there are folk sprinting up the stone steps and pushing out press-ups. Others skip on the spot or stretch off taut limbs. Below, a group of young men are doing step-ups on along a row of short concrete blocks, spurring one another one with collective shouts of one to 20 in Amharic. On a patch of concrete between the track and the highway, meanwhile, groups of lads are playing football. On the sidelines, three youngsters in flip-flops pass a plastic water bottle back and forth for want of a ball.

My flight leaves early the next morning, although not so early that I don’t have time to visit Meskel Square one more time. This time I go in T-shirt and shorts. It is the weekend and numbers have swelled. People of all ages are out, from energetic kids of five and six to sprightly looking grandparents. My expensive running shoes make stand me out. But not as much as my slow pace and wheezing lungs. I put it down to a combination of post-sickness lethargy and altitude: Addis Ababa is located 2,355 metres above sea level. After five or six laps, I pack it in.
Turning back to my hotel, I regret that my all-too-brief experience of running with the Ethiopians is already over. Before I leave, however, I have a final encounter with Solomon, who appears out of a gaggle of runners and comes bounding up to me. “Leaving so soon?” he wants to know. Unfortunately, yes, I reply. But I’ll be back. This information appears to please him. “You OK runner,” he reassures me. “Who knows? Maybe one day you be as OK as Ethiopian amateur.”