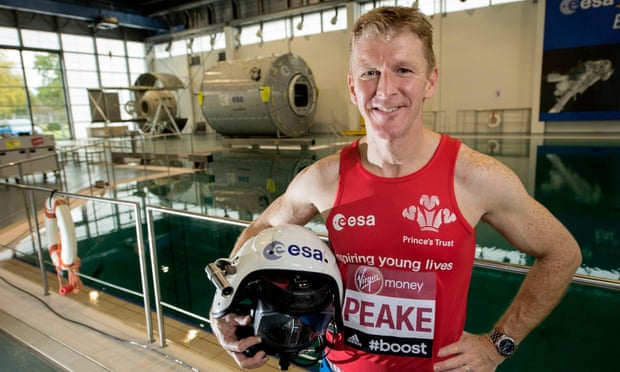 As if going into space wasn’t enough of a challenge, British astronaut Tim Peake is now taking part in a marathon up there, to coincide with the London Marathon this weekend. So how on earth (or not) do you actually run a whopping 26.2 miles in a weightless environment?

The only other person to have done it is Nasa astronaut Sunita Williams, who ran a marathon in space on a treadmill in 2007. On completing the endeavour she said: “Hooyah! I am done.” Williams completed her run in about four hours 24 minutes.

Running in space is not as odd as it sounds; in fact, it’s one of a series of exercises astronauts do daily to prevent the loss of physical fitness and to mitigate damage caused to bones and muscles from living in micro-gravity.

There are some hurdles to overcome before they can even set foot on the treadmill. Firstly, they must strap themselves on, to keep from floating off. When we run we release a certain load when the foot contacts the ground – but runners in space can chose how much of an impact they want to take by adjusting the straps that keep them in place to have more or less slack. The machine itself is on a vibration-isolation system so the runner doesn’t impart heavy loads on to the space station’s structure.

Space Agency medic Dr Jonathan Scott explains: “The only way to get astronauts to run is to secure them down to the treadmill and the harness goes over their shoulders and around their hips. It’s secured using a series of clips that attach to the machine itself, which can be adjusted according to the load the runner wants. More loading is more challenging, but it means the harness can feel uncomfortable; it’s like trying to run with a heavy rucksack. Astronauts need to combine the right speed and the right loading to make their run challenging but not too uncomfortable.”

Scott says Peake is usually loaded with 70-80% of his normal body weight, which makes exercising challenging for him, but he only usually runs for about 45 minutes, so they might need to adjust this for his marathon run.

Another consideration when running in space is hydration. Scott says Peake will hydrate using drinks pouches that are taped or Velcroed to the treadmill around him. He will also have the support of some of his crewmates if he needs refreshment handed to him.

“He has some carb gels with him, which he took up in preparation. However, when you eat on Earth, food has weight, so it sits at the bottom of your stomach, but in micro-gravity it floats around. This means Peake will have to consider his pre-race meal carefully, and he cannot eat too close to the race itself or during the race. He is also going to need to be careful not to eat too much.”

Peake is also going to need to wipe away sweat, Scott says, because in micro-gravity perspiration has no weight and so sticks to the skin. He may find himself getting sweatier than usual due to the fact that the space station’s temperature is around 23C.

Another quirk of running in micro-gravity is that all the gases in the air are the same weight. While on Earth the air we breathe out is warmer than that we breathe in and so disperses away, this doesn’t happen in space. To stop an accumulation of carbon dioxide around Peake, the space ship needs good ventilation – and the treadmill room is particularly well ventilated.

Peake has been training for the race just like everyone else, according to Scott. “Because the space programme is busy, there is only a certain amount of time to spare for exercise, and we cannot double or triple that time, so he has been doing longer runs at the weekend in his own time, as anyone else would. He has been building up his time, moving for an hour to an hour and a half.”

Scott adds that the impact on Peake’s body is also similar to what you would experience on Earth, although there are different challenges associated with this. “His legs will still be tired after the race, but he is not going to be using as much loading as a normal runner who uses 100% body weight. This means his legs won’t feel quite the same strength of impact, but he has the additional challenge of running with a harness on his hips, which will be challenging for his legs and upper body.

“In principle, he is still running normally; his heart rate will go up and his physiological response will be similar to that felt on Earth. Having said that, he does face unique challenges, different to those faced by a normal runner.”

Related posts:
10/01/2018 Fitness Comments Off on How to run a marathon in space
Diets News