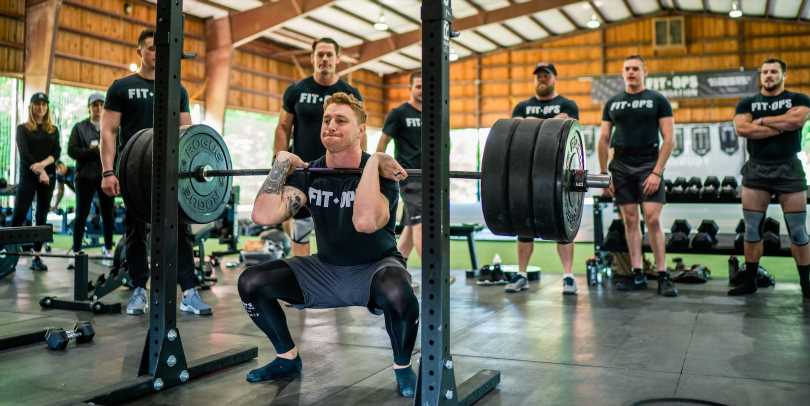 When members of the U.S. military leave the service, there’s not always a clear path forward. According to some veterans, it’s much more common to feel unmoored, without the guidance or drive to even find the next step, let alone take it.

Enter Erik Bartell. He spent five years of active duty service in the Army in an infantry unit before becoming the Executive Director of FitOps Foundation, an organization founded to give veterans a leg up on entering the fitness industry. Through three-week teaching retreats or camps that serve as one part clinic, one part networking meet-up, and one part group therapy, the 501-C nonprofit has helped shepherd former service members a start to their post-military career. The organization is supported by top-notch talent in the fitness industry and become a special cause for wrestling superstar and actor John Cena.

Join us at Performix House on Monday, November 11th for a fundraiser workout and happy hour to bring purpose to the lives of deserving veterans. There will be a raffle with so many amazing prizes to include @beaverfit @theragun and @rhone and many more — all aligned with us in this fight to empower veterans through fitness. Click on the link in my bio to make a donation. The top 20 donors will recieve a spot in the workout along with additional prizes. EVERYONE is welcome to the happy hour.

Program graduates leave prepared for a NETA personal training certification, which qualifies them to work as personal trainers. More importantly, they earn a new classification as a Certified Veteran Fitness Operative (CVFO), along with a deep base of hands-on knowledge, a wide community of professional connections, and a new mission.

A Direct Path to Leadership 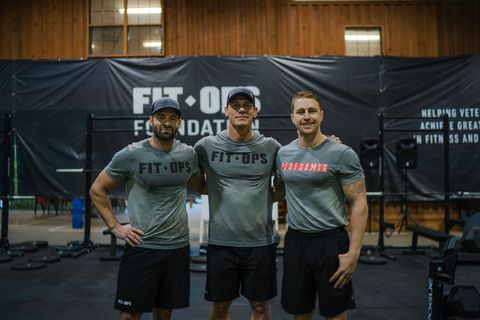 Bartell is particularly suited in his current role because he started on the same level as any other vet entering the program. “When it came time for me to get out [of the military], I didn’t really know what I was going to do,” he tells Men’s Health. “I loved fitness, much like many veterans. I also loved leading, and leadership. But I didn’t understand that there were career opportunities within the fitness industry.”

Bartell only considered his gym time as a hobby or a side gig at best, and aimed his sights on graduate school and a doctorate in psychology. But he couldn’t kick the workout habit, and applied to the Fit Ops program to help to obtain a personal trainer certification to give him a way to earn some extra cash and stay active as he prepped for his studies.

“Our main mission and purpose is helping veterans find purpose through fitness.”

He never even applied to grad schools. FitOps’ brass contacted him shortly after he submitted his credentials and asked if he might consider consulting for the organization when he attended a camp in September 2017. He was given an inside look at the operation, from the perspectives of both participants and administrators. When the Executive Director offered him a role after that experience, Bartell knew he had found his future.

“At that point, I had seen the program and I loved everything about it,” he says. “I saw such infinite potential in what it could be and what it could do for veterans. I pursued that full steam.” When he left the military in January 2018, he joined FitOps as the Director of Operations.

How FitOps Builds the Best

When FitOps hosts a camp, the organization brings in the best experts from across the country. This includes trainers from Performix House in New York City (where Bartell recently worked as a GM and whose parent company, Performix, serves as a primary sponsor of the program) and live-streamed seminars with big names like Gunnar Peterson, Jen Widerstrom, and others. The goal is to give participants more than just the knowledge to pass a cert test, instead focusing on the tools they’ll need to be the best in the business. “Nowhere else are you going to get one-on-one with someone of that capacity who’s going to spend hours telling you ‘these are the mistakes I made when I first came on, these are the mistakes I made last week, and I want you to do it better and start from a much higher floor,’” says Bartell.

Demand for the program is high (the current applicant pool is over 800), but each camp hosts between 20 to 80 participants. Bartell says the ideal group is around 30 per session. This preference runs consistent with the org’s mission-centric, military ethos: Better to work in smaller numbers so that there’s time and space to build relationships and no one is left behind.

One of the reasons the program is so sought after and successful is that Fit Ops doesn’t just serve vets who are only just leaving the military. Older service members who have been out for longer periods are also eligible for consideration. The real parameters for selection, according to Bartell, are passion for fitness and leadership.

A typical day in FitOps camp starts with early morning PT led by squad leaders, who are usually honor graduates from previous camps. Breakfast and hygiene come next, then a four-hour classroom block, which emphasizes hands-on instruction. There’s an hour break for lunch and decompression, but participants are back in classrooms for another four-hour block in the afternoon.

“We have the biggest, scariest dude, who is our squad leader, who gets up there and he cries.”

So far, this might not sound much different than any other intensive teaching retreat. The session after dinner is what really sets FitOps apart. Everyone gathers for “Performix Talks,” where the community aspect of the program shines through. “This is where we have one of our leadership get up and tell our story,” Bartell says. “It’s a big circle with all the veterans in it, and it’s really about vulnerability. It’s showing them that you can get something off your chest here, you can talk about what’s been bothering you. You can tell us your story, because a lot of people just want to tell their story.”

The experience is transformative. “By day three or four, the participants are like, ‘I wanna do mine,’ because we have the biggest, scariest dude, who is our squad leader, who gets up there and he cries,” Bartell says. “That’s what really glues the group together. On day one or two, they’ve got walls up. By day seven, day eight, they’re a family. That’s what builds our aftercare.“

That’s not to say that there’s only peer support available for the attendees—every camp also has mental health professionals available on call. But Bartell stresses the importance of this community bonding, since these are the ties that last beyond the three weeks of camp. Graduates and repeat instructors can join a closed Facebook group, which serves as both a support system and a professional network. An early graduate started at Equinox, which led to a pipeline from FitOps to the gym chain.

What’s Next for the FitOps Foundation 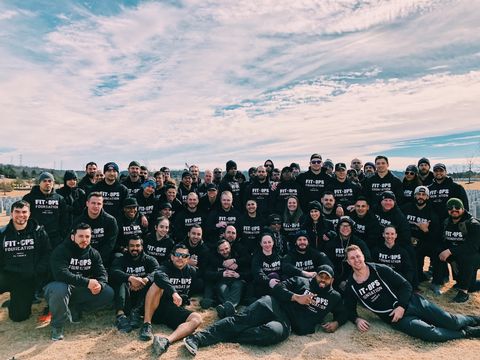 Going forward, Bartell hopes that FitOps can scale even larger and set down roots in one full-time location (right now the camps travel, popping up in places like Dallas, Arkansas, and Pennsylvania). He also wants to find better ways to serve the wider population of military service members, starting by catching active duty members before they fall through the cracks and lose the safety net of a regular paycheck and time to learn. This effort begins with a ‘Military Athlete’ program, which will aim to identify current service members who are already passionate about fitness and giving them mentorship opportunities to kickstart careers.

“Our main mission and purpose is helping veterans find purpose through fitness,” Bartell says. “Fitness makes people happy, and that’s the easiest way for us to help these guys.” The organization’s efforts are ultimately driven by one of the biggest problems facing veteran communities today: the heartbreakingly-high suicide rate. Roughly 20 former service members die by suicide each day, according to the most recent statistics.

But Bartell is not one to buy into the prevailing narrative of the epidemic being the result of a cohort of people with brains broken by war. “A lot of people think veteran suicides, PTSD, but it’s really not. When you talk veteran suicide, a lot of times it’s so many other factors. The biggest thing we see now among young veterans who have separated and are committing suicide is that they’re not actually combat vets. A lot of them have transition stress from leaving the military and not having a next step. It all goes back to purpose and having a strong support network. That’s really where FitOps is strong: Reuniting you with that support network that have the same background, characteristics, and values, and we’re giving you a common purpose, which is helping others through fitness.”

Related posts:
11/11/2019 Fitness Comments Off on How One Organization Wants to Save Veterans' Lives Through Fitness
Diets News 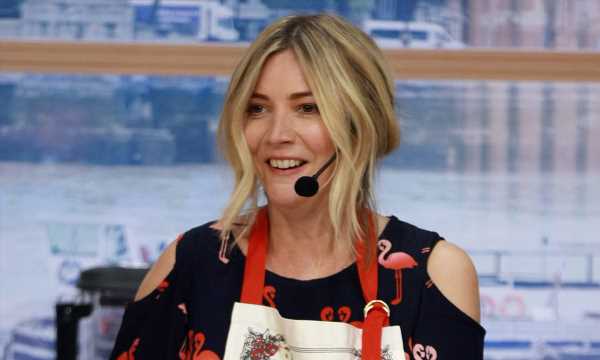 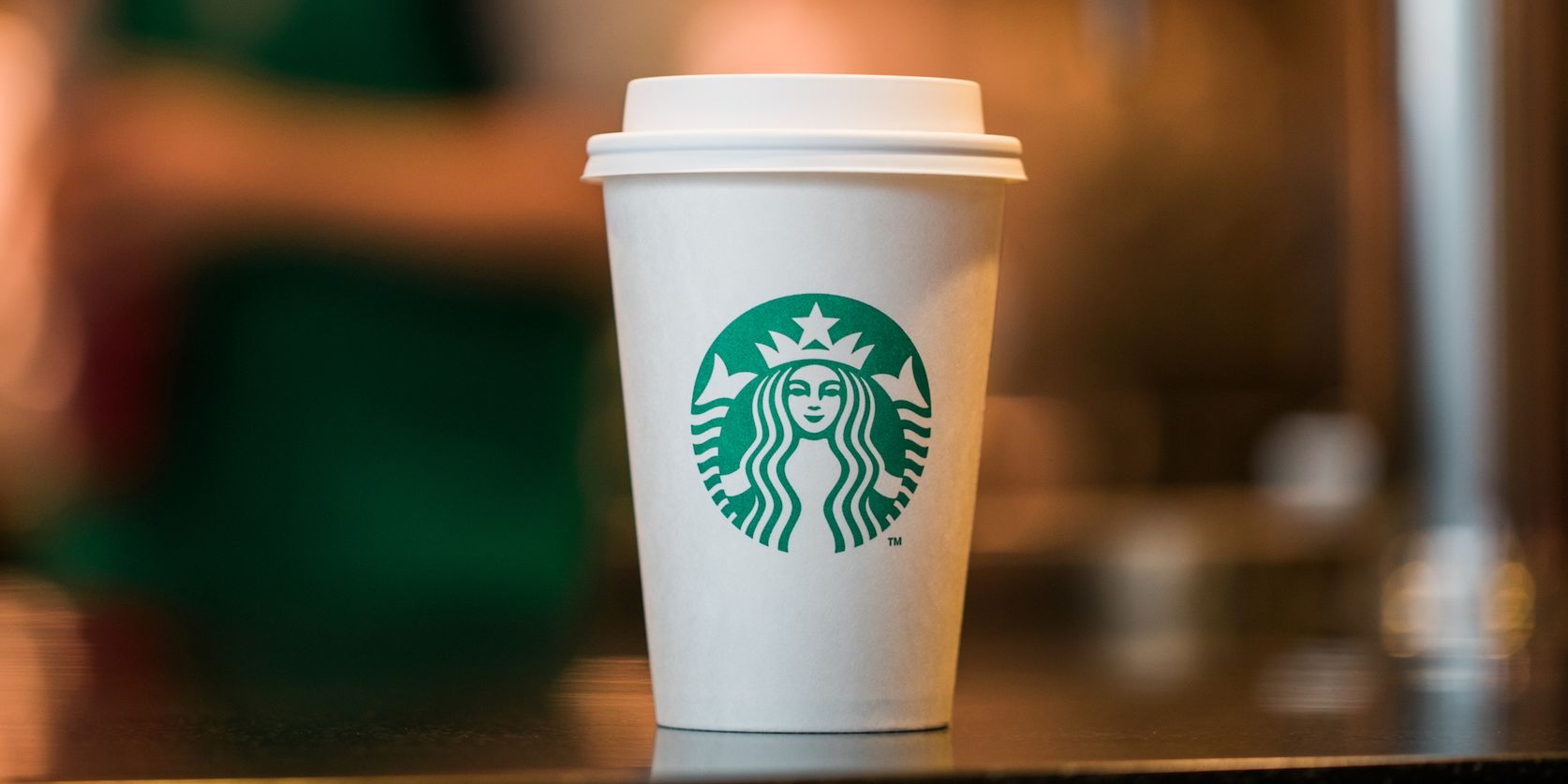 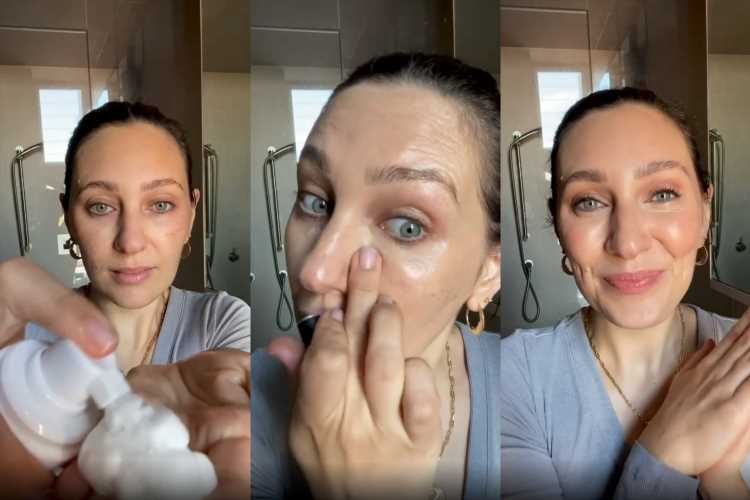