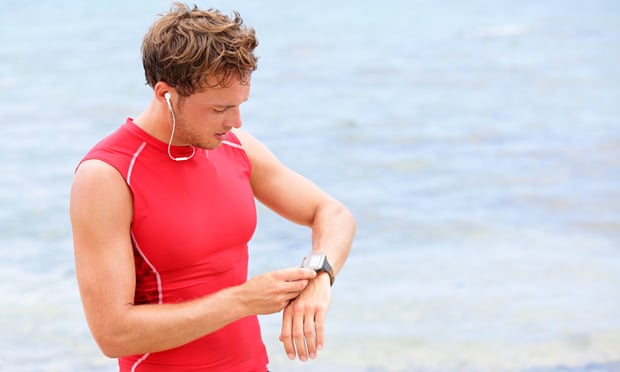 In the cult 1970s television show, The Six Million Dollar Man, astronaut Steve Austin (played by Lee Majors) is shown crash landing on Earth, then being whisked into a hi-tech operating theatre. “Gentleman, we have the capability to make the world’s first bionic man,” intones the narrator over the opening credits. “Steve Austin will be that man… Better, stronger, faster.”

Today, you don’t need $6m to be Steve Austin, not when £60 will buy you an entry-level wristband from Fitbit that can monitor your workout routine and send you reward “badges” to keep you motivated 24/7.

“On the walk to work, at the weight room or in the last mile,” reads Fitbit’s manifesto for a better you. “Every moment matters and every bit makes a big impact.”

Fitbit certainly made a big impact on the New York stock exchange last week when its public flotation saw the manufacturer of activity trackers and wearable tech devices valued at an astonishing £3.8bn. And where Fitbit leads, competitors such as Jawbone, Xiaomi and Apple are desperate to follow.

Wristbands that monitor exercise and sleep patterns are just the start of what pundits are calling a revolution in “digital health”. How about a smartphone that can measure blood-oxygen and blood-glucose levels – indispensable, you may think, if you’re diabetic? Or a patch that can monitor your ECG linked to an app that can tell when you’re running low on heart medication and need to order up a repeat prescription?

Many of these devices are already on the market or coming soon via private health providers. Indeed, as patches and monitors become smaller and more lightweight, experts envisage a time not far off when physical activity and vital sign data will be collected seamlessly from devices planted on or in our bodies without our having to do anything much at all.

In this brave new world of human-technological assemblages, the “digitally engaged patient”, or epatient, becomes the new ideal and a marketer’s wet dream. These technologies are seductive precisely because they offer us the fantasy of becoming Steve Austin, of taking control of our health and pushing ourselves to new limits. “This Father’s Day get him the hardware he really wants,” reads Fitbit’s current advertising campaign. “Seek it, crave it, live it.”

To judge by Fitbit’s own performance figures – 10.9m devices sold last year – the sales pitch is remarkably successful and likely to become more so: by 2017, experts predict the market for digihealth devices will be worth $26bn in the US alone.

But do we really want to live in a world where we wake up and go to sleep with the electronic equivalent of a personal trainer on our wrist? Or where employers and insurance companies can see at a glance if we have been slacking in the gym or eating too many hamburgers? These tracking devices are all very well for dads and mums at the top of Fitbit’s “leaderboard”; less so for those languishing among the also-rans.

There is nothing new about the self-monitoring of bodily functions of course. People have been examining their urine and stools for signs of disease since Roman times, and Ames first began marketing a battery-operated meter with a moving needle for the home-measurement of blood glucose in the 1970s.

By the early 1990s, as people became used to viewing health in terms of a set of “risk factors”, and as multiple drug regimes for the management of long-term medical conditions became increasingly commonplace, so the notion of regular check-ups and tests, in which vital signs were monitored as a matter of course, began to be seen as normal.

The internet, however, has introduced a new normal, one in which the body is no longer viewed through the prism of industrial-era mechanical metaphors but is increasingly seen as part of a complex digitised system of information-gathering – a fleshy extension, if you like, of the internet of things.

The danger is that those of us who do not wish to open up our bodies to more intrusive digital surveillance, or who are identified as not meeting norms for appropriate body weight, good health or physical activity, will be labelled deviants or somehow made to feel inadequate (or, in a worst-case scenario, made to pay higher insurance premiums or refused credit or employment.

In the wake of Edward Snowden’s disclosures about the collection of private email data, there are also concerns about who else will have access to these biometric stats. Although Fitbit invites users to share performance stats regularly with “friends” via its app, it promises “never to sell the data to third parties”. But such transparency is not the industry norm; indeed, a recent survey of 1,000 apps by the Global Privacy Enforcement Network found that 60% raised privacy concerns.

According to Deborah Lupton, a sociologist who has made a critical study of the digihealth market, technology companies want us to think that by engaging in self-monitoring and self-care practices using wearable wireless technologies we will be empowered to “take control” of our health. But, she explains: “These apps and devices also sometimes ‘push’ or coerce us into using such technologies in the interests of other actors and agencies”, raising questions about their potential for “economic and social discrimination”.

These questions – and the disparities between the superfit and the rest of us – will only become sharper as new devices and enhancement technologies that blur the line between flesh and filament, form and function come to market.

Bionic limbs, for instance, are no longer a 1970s fantasy but widely available if you can afford the £30,000 asking price for an i-limb. Ditto French company Carmat’s artificial heart – a snip at £150,000. And as Oscar Pistorius demonstrated before his spectacular fall from grace, a set of steel running blades can enable you to run faster than many normal-bodied athletes and confer Olympian glory.

Fitbit in other words is the thin end of a very long wedge, one that may see us sprinting towards a post-human future in which some people enjoy markedly better health styles and promotion prospects than others. For those who can afford it or who are sufficiently motivated, that may seem a goal well worth pursuing. But for those of us who value our privacy or just like to take it easy on Sundays (and sometimes on other days too) Fitbit may be a bracelet too far.

Related posts:
09/30/2018 Fitness Comments Off on Fitbit is the start of a revolution in digital health, but is it good for us? | Mark Honigsbaum
Diets News