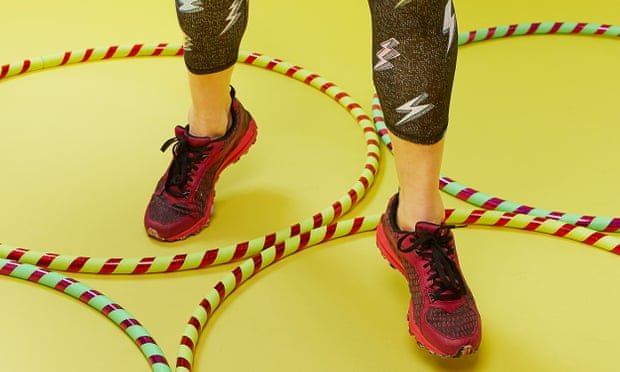 Prama is still pretty niche – except in New York, or Somerset, home of the first UK gym to take it up – so for now you can’t avoid going to a David Lloyd to try it. Do not get your head turned: the place is like a swanky country club; it’s fitness designed by the lovechild of F Scott Fitzgerald and Nigella Lawson. Concentrate on the exercise – that’s what you’re here for.

I took my 10-year-old, T, for the family class: it’s like aerobics crossed with an arcade game. Squares on the floor light up, and you leap on them. Circular paths flash orange as you run along them, then all your lights go berserk if you’re faster than your child. There are playground games, like running around trying to touch each other’s knees while defending your own. Oh, and a slippery dancing mat. If you can find a pursuit more ineffably charming than watching your son dance to Blondie without falling over, I’ll eat my fitness bandeau.

Everything is geared towards a child’s attention span: there are 10 separate workouts, 45 seconds each, with a 15-second rest as you move between them.

There was only one other family there, a mother with two smaller children, so I couldn’t test the water on how seriously you’re meant to compete with your child. Obviously, I wanted my lights to flash and not his. But then, I wanted him to be happy. It reminded me of the time we were playing Scrabble and I got the letters for “whore”, didn’t want to explain what it meant or deliver my lecture on the politics of shaming sex-workers, but on the other hand, I wanted the points. In the end, the choice in Prama was taken away from me, because he’s fitter than I am. They’ve been doing the daily mile at his school. How could I possibly have guessed this would impact his cardiovascular health?

I have not one bad thing to say about this. The good things, in no particular order… It’s not boring. It isn’t possible to get bored in 45 seconds. The lo-tech game activities, chasing each other round a circle on one leg, fetching cones and putting them in different places, are surprisingly diverting. Adults think they’ve grown out of childish things, but it’s laziness, not maturity, that stops us playing “it”. Some fitness innovations are just snake oil (see “low oxygen training” passim), but never let that blind you to the fact that people who think, hard, about any given activity are liable to come up with stuff that improves it.

Most of all, it is unendingly delightful to do exercise with your kid: to be red-faced and determined at the same time, not sitting on the sidelines, half-aware that they’re up to something while you check your phone; to be chasing the same meaningless goals like a pair of laboratory mice; to have a righteous beer together afterwards, except not get him a beer.

Active families who play tennis and whatnot will probably know all this, but for the non-joiners, the non-team-sporters, prama is a revelation.

The optimum exertion period for adults in interval training is actually three and a half minutes, not 45 seconds. But whatever.