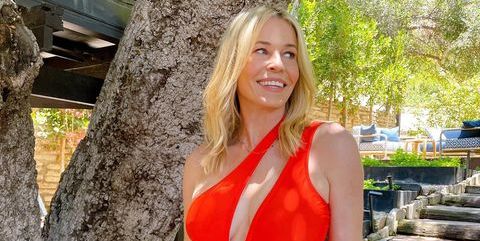 It’s officially the summer season, which means you can expect to see a lot more celebrity bathing suit pics in your Instagram feed over the next few months. Chelsea Handler, 46, just joined the mix and yeah, she’s well aware that she looks good.

“Don’t I look hot in this swimsuit?” she wrote in the caption. “It’s from @sloanestephens. Congrats on your win! Break a leg on round 3 tomorrow. (Body by @benbrunotraining).”

In the Instagram photo, Chelsea is working a red one-shouldered one-piece with a sexy diagonal cut-out down the middle. She looks super happy and her legs are ridiculously toned. (BTW: The red swimsuit—designed by tennis pro Sloane Stephens—is sold out, but you can still score a zebra or blue print version for $188 to channel Chelsea).

That Ben Bruno Chelsea name-checked in the caption? He’s her trainer, and the workout guru behind many a strong celeb bod.

In May, Bruno dropped a video on Instagram of Chelsea doing Copenhagen side planks and, whew, they look hard. “Every once in awhile, @chelseahandler says something nice to me. Today was not one of those days,” he joked in the caption. “Despite her tricky personality, I gotta give credit where credit’s due and say that she’s got a crazy strong core. These Copenhagen side planks are no joke and she makes it look easy (it’s not). Now if only there were exercises to make her nicer… .”

Chelsea doesn’t just work out to look good in a red one-piece (although that’s a definite perk). She gets some serious mental health benefits, too. “Working out is about being strong in your body for your health, while before it was about being physically looking good,” she told People. “Whereas now I’m like, I have to mentally be strong in order to work hard and get sh*t done. It makes you feel better. At a certain age you’re just like, okay. I mean obviously I want to look good, too, but it becomes more about being mentally strong.”

Chelsea likes to have fresh celery juice first thing and then doesn’t have anything else for a few hours. After that, she says she’ll have scrambled egg whites with avocado, topped with Parmesan cheese “because that is my favorite flavor in the world.”

Lunch is usually grilled oysters, a turkey wrap, or a salad, and dinner might be something like turkey meatballs, sushi, or vegetarian nuggets.