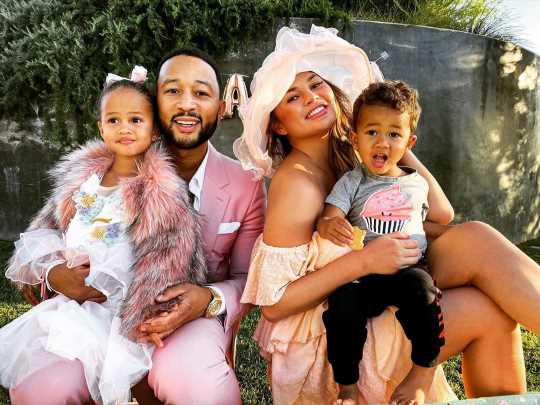 Other videos showed the girls hanging out under tulle-decorated play canopies, Teigen fanning herself with a feather fan and Miles — who had changed into a more casual ensemble — letting out a series of happy sounds while finally enjoying one of his mom's Oreo pops.

But not everything was perfect! "This is a disaster, guys, it's a disaster," Teigen joked in one video. "Kennady doesn't want her pizza; she wants macaroni and cheese. Luna's cold. And I can't lie — the pizza's dry, you're right."

One day ahead of the bash, the mother of two shared a photo of a smiling Luna in an outfit that she didn't seem to end up choosing for the party itself, but screamed royalty: a blue gown with tulle sleeves and matching gloves and hat, complete with a white lace parasol.

"Still planning tomorrow's tea party," the Bring the Funny judge captioned her Saturday snapshot, which also showed some of the teacups, plates and such in the background. "It's two people. Two four year olds. I'm taking this very seriously and I am def way more excited than them."

The family's sweet soirée comes just under a month after they marked little Miles' second birthday with a Sesame Street-themed at-home celebration, complete with plenty of sweets — and adorable photos.

Giving her followers a glimpse into the family's bash, Teigen showed off a handmade birthday banner she made, as well as some adorable, and on-theme, cupcakes.

"It's my boy's birthday. He's two," the model said while showing off the colorful treats, adorned with festive toppers depicting her son getting chummy with some of the most beloved Sesame Street characters.

Fittingly, the birthday boy also wore a shirt featuring his favorite character of all time (at least so far): Elmo! In a nod to one of his other recent favorites, Teigen later showed off a full-size race-car birthday cake from Carlo's Bakery, which was shipped from New Jersey to California by Goldbelly.