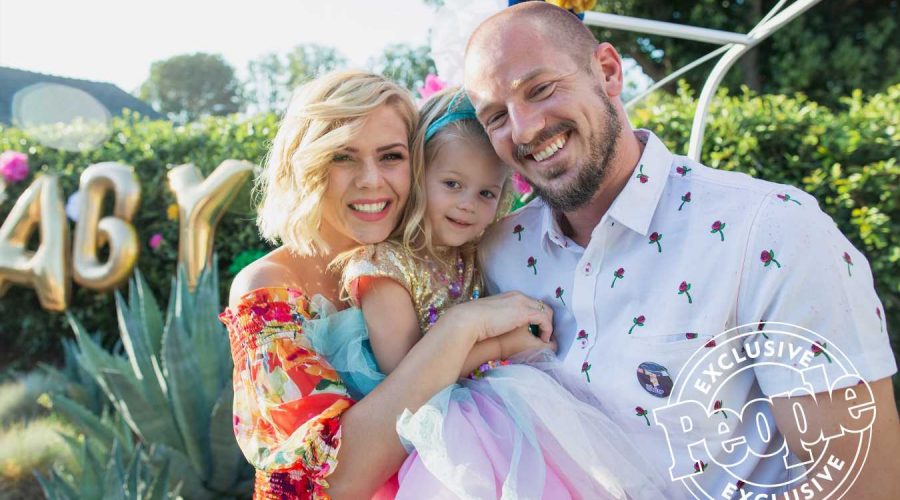 “We are excited to say that a baby sister is on the way!” Caldwell tells PEOPLE. (She and pro soccer player Harvey, 35, already share 3½-year-old daughter Harlow Monroe.)

The soon-to-be family of four was surprised with a fiesta-themed “gender reveal party” — piñata and all — by family and friends at their Los Angeles home on Monday afternoon.

Ahead of the big reveal, they munched on two llama-themed cupcake pull-apart creations — one blue and one pink, captioned “Señor” and “Señorita,” respectively — as well as cactus macarons and mini cupcakes, all from Polkatots.

The surprise was complete with a fun scavenger hunt created for little Harlow to solve, which eventually led her to a pink Joovy kids' stroller that indicated her new sibling would be a sister.

As guests quenched their thirst at a VitaCup Iced Tea bar and with LaCroix sparkling water, Caldwell and Harvey released pink smoke out of cannons in their own fun, iconic reveal.

Earlier this month, Caldwell and Harvey, a left back for Los Angeles FC, revealed exclusively to PEOPLE that they’re expecting their second child together.

“My husband, daughter and I are so thrilled to attend the Biggest Family Shower Ever to announce our new addition to the family,” she told PEOPLE at the time. “We are overjoyed with the news of a sweet baby on the way and ready to celebrate in a BIG way!”

“Time to shout it from the rooftops,” Caldwell added. “So proud to finally rock this little bump!”

The second-time mom-to-be also shared that her little one on the way is due to make her arrival on Feb. 27, 2020.

Kimberly Caldwell and Husband Jordan Harvey’s Romantic Maternity Shoot: “It Was So Empowering to Celebrate My Bump”

Caldwell tied the knot with longtime love Harvey in December 2014 in Palm Springs, California, her rep confirmed exclusively to PEOPLE at the time.

The duo welcomed Harlow the following October, telling PEOPLE they had been “preparing most of 2015 for this day to bring our baby girl home to her princess nursery.”

In an interview with PEOPLE weeks after welcoming her first child, the Without Regret musician reflected on the difficulties of first-time motherhood.

“I feel like everybody sugarcoats [new parenthood] because they don’t want to sound ungrateful because we just couldn’t be happier, but at the same time, it really is a challenge,” she explained. “But it’s the greatest challenge and we’re up for it.”