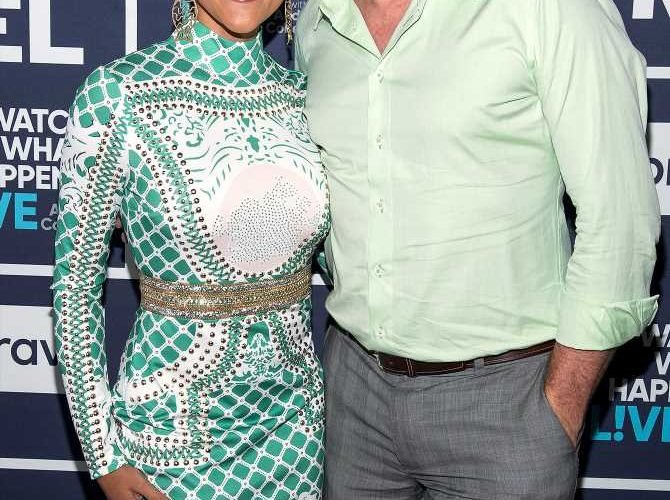 The pregnant Real Housewives of Potomac star bypassed a traditional gender reveal party with colored cake, confetti or balloons for something a bit more extreme: skydiving

The reality star, 30, announced she is expecting a baby boy after sending husband Michael Darby out of an airplane to assist in sharing the exciting news.

“This is a big day for us because we are going to reveal Baby D’s gender,” the couple said in a video Ashley shared to Instagram on Wednesday.

In the clip, Michael, 59, leaps from a plane in tandem with an apparent instructor as his wife waits for him on the ground at Skydive Orange in Orange, Virginia.

On the way down, Michael opens a bag that sends blue powder bursting into the sky, indicating that their bundle of joy, due in July, will be a baby boy.

Ashley then runs to greet him with a hug as he lands on the ground amid a cloud of blue.

“Here it is my darlings! Mickey and I are so happy to share this incredible news with you, as we prepare for this amazing gift to come into our lives! We are BEYOND WORDS excited! ??,” she captioned the post.

The expectant mama previously teased the reveal on Instagram May 21, writing that it was “coming oh-so-soon!”

The Bravo star confirmed her pregnancy exclusively to PEOPLE in February, months after revealing at the Real Housewives season 3 reunion that she’d suffered a miscarriage.

“It was such a traumatic experience,” she told PEOPLE. “At the time, I didn’t fully understand the magnitude of how it would affect us as a couple and as individuals because we kind of thought it would be a given that we would just be able to have children. But it was challenging.”

Upon learning in November that she was expecting, Ashley said it was an overwhelmingly emotional experience to share with her husband.

“I’m not the most emotional person, but I shed some tears,” she said. “Then Michael started crying. And Michael, who is a very stoic person, when he cries, I start bawling. It was like a share of waterworks between the two of us!”

Baby boy will be the first child for Ashley and the third for Michael, who has two adult children from a previous marriage. The couple tied the knot in May 2014 after dating for two years.

And Ashley is hardly the first in the Real Housewives franchise to host a sex reveal — though she is likely the first to do it thousands of feet in the air.

Real Housewives of Atlanta star Porsha Williams revealed in October she was expecting a baby girl by throwing a party and having attendees set off confetti poppers, which created a glittery cloud of pink.

Meanwhile, Real Houswives of Orange County alum Gretchen Rossi announced she was having a daughter by launching cannons that revealed clouds of pink smoke and confetti.