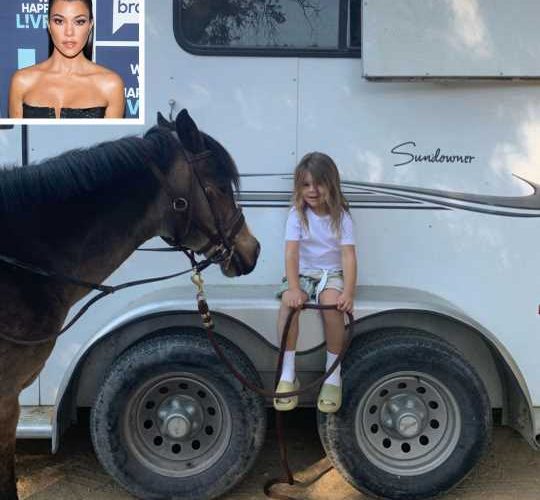 Kourtney Kardashian is not taking any criticism of her kids.

On Sunday, the Keeping Up with the Kardashians star, 40, shared photos of her son Reign, who turns 5 on Dec. 14, and 7-year-old daughter Penelope on Instagram during a family getaway to Santa Ynez, California.

In the photos, Reign can be seen with his long tresses, smiling and having fun with a horse and tractor. However, one fan commented on Kardashian’s youngest child, writing: “She really need to cut his hair.”

The mom of three, who co-parents with ex Scott Disick, quickly clapped back in the comments section with a fiery response. “She really need to not worry about kids that aren’t her own. He is a happy boy,” Kardashian wrote.

This is not the first time Kardashian has been mom-shamed for keeping Reign’s hair, which falls past his shoulders, at a longer length.

Last November, the Poosh founder was criticized for not cutting her child’s long locks when she shared a poolside photo of him. At the time, Kardashian did not respond to the criticism, however many followers defended her in the comments section.

It wasn’t until February of this year that daughter Penelope got her first haircut.

“First ever hair cut in all of her enchanting six years,” Kardashian announced on Instagram, along with a photo of Penelope and her shoulder-length hairdo.

And back in 2015, elder son Mason, who rocked longer hairstyles since he was an infant, showed off one of his earliest haircuts with an edgy look that was shaved on one side and long on the other.