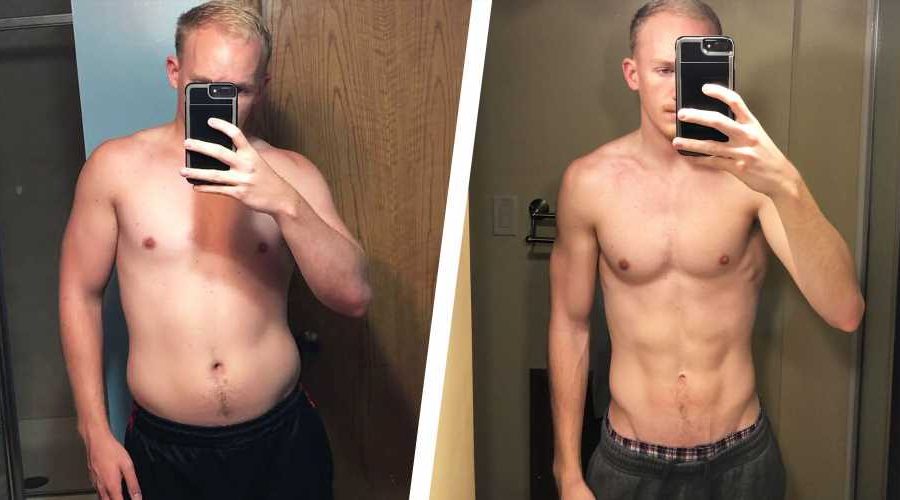 Andrew Ogren was just out of college, but when he posted summer pictures on Facebook, friends ribbed him about his “dad bod.” It wasn’t for lack of trying: The 23-year-old software engineer from Superior, Wisconsin, had started lifting weights during his freshman year. He kept it up, hitting the gym a few times a week.

“I had big arms and my chest was getting bigger, but I still looked chunky in pictures,” he says. He was bulking up, but not in the way he wanted—increasing jean sizes instead of seeing better definition. He hit the 200-pound mark with nearly 22 percent body fat.

After the “dad bod” cracks, he figured he had to change something. That something was his diet: He’d been getting lots of protein, but with too many calories, which led to weight gain. Brats, corned beef hash, and baked beans had been his downfall.

Looking for a diet regimen, he found Jeremy Ethier’s Built with Science program. Using Either’s spreadsheet, he started tracking his meals. “I realized how much I was eating,” he says. “The first change was to stop having about four meals a day.” Looking to cut about 750 calories from his daily diet while still getting about 200 grams of protein, he gravitated toward lean proteins: grilled chicken, tuna, whey protein, and Greek yogurt. It wasn’t easy at first: “Sitting at a desk for long periods of time doesn’t exactly take your mind off of being hungry,” he says.

Ogren also modified his workouts, switching from a “bro split” three to four days a week divided between upper and lower body, focusing on compound lifts. That optimized his workouts without requiring much more of a time commitment—an 80-minute drive to the gym after his internship, then another 30 just to get home meant he wanted to maximize his efficiency. (He also gives a shout-out to his girlfriend, Elise, for keeping him motivated.)

He quickly dropped about ten pounds, then settled in to losing about a pound a week. In five and a half months he lost more than 30 pounds, going from 198 to 163, while gaining some muscle. “I have never felt better, and never looked better,” he says. “I am far more confident and feel far more energized.”

A big learning was to take a deeper look when it comes to weight loss and fitness advice. “Eating protein,” it turns out, wasn’t the sophisticated guidance he needed. “Asking for help can save you an extreme amount of time and money,” he says. He plans to drop a bit more body fat, then lean bulk to gain muscle.

Consistency, Ogren says, is one key to progress.” If you have a night of overeating (or over drinking),” he says, “don’t punish yourself the next day, just get back on track. A light workout is better than no workout.” A gym partner can help with that, keeping you motivated day after day, as can a carefully designed program. Ultimately it’s about forming a habit, and that’s much easier if you don’t take it on alone.

Related posts:
01/31/2020 Diet & Food Comments Off on This Guy Changed His Protein Sources and Got 30 Pounds Leaner
Diets News