New diet trends are rarely innovative. The latest weight-loss fads only appear different with their individual set of rules, banned foods or food groups, and daily caps on certain nutrients. The truth is that most diets operate upon roughly the same mechanism: cutting calories.

Whether it’s Whole30, Paleo, or Keto, the goal of these diet plans is to urge you to eat less food overall, thereby losing weight.

Now an emerging diet trend called “Calories In, Calories Out” (CICO), is putting the calorie-counting method of weight loss front and center.

The CICO plan operates under the premise that you’ll lose weight by consuming fewer calories than your body uses to perform its daily functions. It makes sense, right?

“The idea of calories in and calories out is absolutely the backbone of weight loss,” says Bethany Doerfler, M.S., R.D.N., Clinical Dietitian at Northwestern University. “But metabolism and weight loss are so much more complex than that.”

So before you jump on the CICO bandwagon, it’s important to understand a few key elements of how your metabolism and your body works when it comes to dieting and weight loss.

There’s a healthy way to do CICO and there’s a way that can create some issues.

It’s important to know that counting calories doesn’t always translate into long-term weight management. Even worse, the strategy could leave you feeling deprived and lead to (gulp) disordered eating.

Here’s what you should consider when it comes to health, happiness, and satisfaction, before you adopt the CICO approach to losing weight.

What Is the CICO Diet?

Calories are units of energy, found in food, that fuel your activities—everything from breathing to hitting the gym. 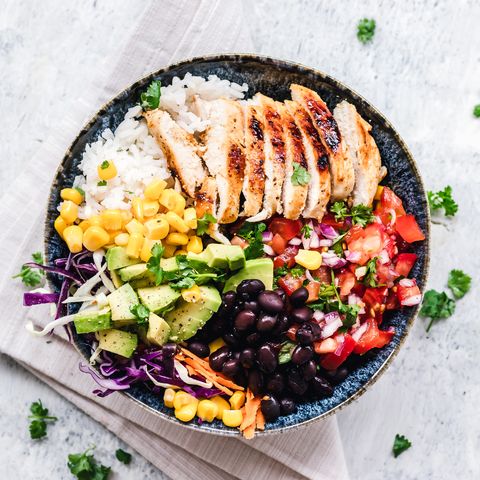 Basal metabolic rate (BMR) is the amount of calories your body burns to stay alive. This figure is individual specific and determined by a number of factors including height, weight, and age. Online calculators offer an estimate, and some doctors use breathing machines that deliver more precise and customized BMRs.

Then lifestyle factors like physical activity need to be accounted for since you’re probably not lying in bed all day. Again, online calculators and formulas offer rough estimates of how many calories your body uses.

Losing weight requires eating fewer calories than your body needs to maintain its activity level. Here’s where CICO comes in.

On the CICO diet you track how many calories you consume daily by way of the aforementioned calculators and then you try to eat fewer calories a day.

So, let’s say that you figure out your calorie need for the day is 2,600 calories. You could then aim to eat 2,200 calories daily in an attempt to lose weight.

And, really, there are no off-limit foods as long as you stay under that calorie threshold for the day.

The premise is simple, but the execution can be challenging. Calorie counting requires meticulous tracking, which can be especially hard to do when dining out or if you’re traveling. Plus, math.

But people have seen results on the diet.

Does the CICO Diet Work?

It’s generally accepted that most diets work because of a calorie deficit, says Abby Langer, R.D.

“However, calories as we know them are so arbitrary,” Langer says. “The calorie was invented a really long time ago and isn’t necessarily accurate in terms of how our bodies metabolize each individual food. We’re learning so much more about how calories are absorbed.”

Your body takes in more calories from food that’s been processed, or broken down from its natural form, she explains. “So if you have a smoothie you’re going to absorb a significant portion of those calories compared to if you eat that food raw or cooked,” says Langer.

Emerging research shows our bodies handle ultra-processed items like chips or Twinkies differently than kale or bananas. “Those [packaged snacks] are going to be viewed very differently on a cellular level,” says Doerfler.

The National Institute of Health found that ghrelin, a hormone that drives hunger, is higher when people consume ultra-processed foods compared to after eating a well-balanced diet, according to 2019 research published in Cell Metabolism.

Heavily-processed foods high in sugar, fat, and salt, may spike insulin levels and cause your body to store more fat, explains Doerfler.

Then, you have to consider the benefits of a fiber.

So even if you are losing weight on CICO that doesn’t necessarily mean that you’re doing so in a healthful way. If the rest of your diet is still rich in junk food, but you’re eating less of it, you may be losing weight, but not improving your diet.

Is the CICO Diet Healthy?

“I like that this diet has brought back to the forefront looking at calories and seeing where your high-calorie food comes from,” she says. “Almost all the time those calories come in the form of refined snack foods and sugar-sweetened beverages. The hope is that those calories would be used for smarter and healthier eating.”

Realizing that morning bagel with cream cheese tops more than 600 calories could inspire you to choose a satisfying meal that contains fewer calories, like oatmeal and peanut butter.

Plus, apps like MyFitnessPal are useful ways to monitor what you’re eating. People who spent just 15 minutes a day logging food lost about 10 percent of their body weight in one month, according to a February 2019 study published in the journal Obesity.

That said, counting calories can feel like a chore, lead to obsessive behavior, and even spark binge eating, says Langer.

“When you’re drilling everything down to numbers it takes away all the joy of food and disconnects us from nourishing our bodies,” she asserts. “This perpetuates diet culture by being punishing.”

Stressing over numbers can be a trigger to binge for people with eating disorders. If you have a history of disordered eating, consult a dietitian who can customize a plan that works for you.

“People are not quite so robotic,” says Doerfler. “Even if someone needs 1,200 calories a day to lose weight, most people are not adhering to that 100 percent of the time.”

Ultimately, the best diet is one that doesn’t consume your every thought. Dieting becomes an issue when you refuse to eat even though you’re hungry, says Langer.

“If you have to pee you wouldn’t say, ‘No, I can’t pee for another three hours,'” she asserts.

“Stop thinking of food as good or bad and just eat,” she says.