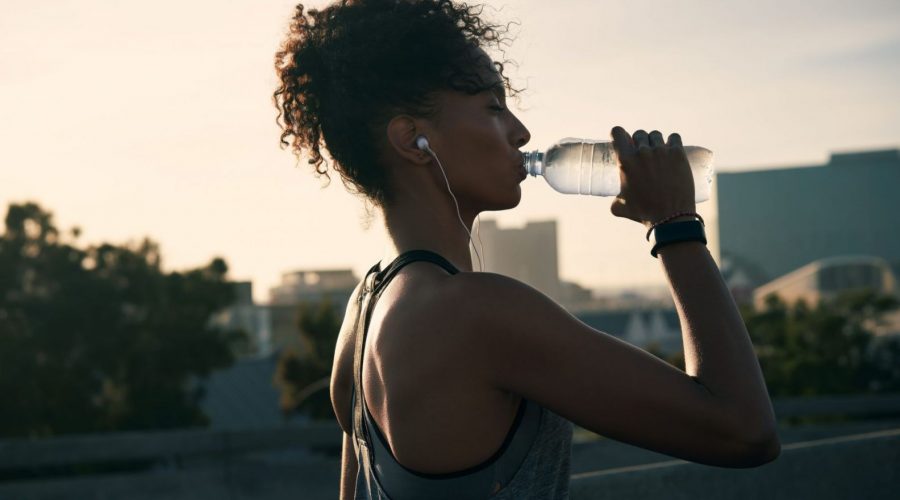 How you hydrate when running is one of the most important parts of feeling energised and happy. If you’re running this year’s London Marathon, then having a hydration strategy is vital… but it’s equally necessary if you’re attempting your first 10k. Here’s how to hydrate your way to the finish line.

When you’re running something as long as a half or full marathon, it’s the small things that can make a massive difference. The socks you wear can be the difference between blisters and happy feet. How you tie your shoes can either cause or prevent black toenails. The food you eat the day before will impact how much energy you have, while the kind of breakfast you choose will either leave you feeling ready to run or swallowing down undigested globs at mile five.

Arguably one of the most important aspects of long distance running, however, is hydration. We’ve spoken loads on Strong Women about whether you really need to drink eight cups of water a day, how dehydration can impact mood, and whether cold or warm water is more hydrating, but knowing when and what to consume to stay topped up while running is a real skill.

How to drink more water: keep hydrated with these 7 drinking tips

The problem is that with long distance running, you often don’t know what you need until it’s too late. The body is in such a state of inflammation that it can be hard to work out when you’re hungry or thirsty and by the time you’re able to distinguish those signals, you’re probably significantly dehydrated and energy deficient.

“Our thirst sensation can be suppressed during exercise, meaning we may become dehydrated before we feel thirsty,” explains Kat Shaw, Lucozade Sport’s hydration expert. “Don’t leave it too late to start drinking, start taking on fluids early on in the race.”

It’s not just that feeling hungry and thirsty is distracting; dehydration can seriously impact your performance on the road. According to a 2011 study published in the Journal of Athletic Training, 70% of half and full marathoners believe that dehydration has negatively impacted their performance on race day. It’s worth pointing out that most of the participants surveyed lived in hot, humid parts of the US so potentially fewer would say the same in the UK but the fact still stands that many of us do suffer from dehydration.

That can lead some runners to overdo it on the water. A recent review published in the journal Nutrients says that dehydration and overhydration are the two main issues when it comes to endurance exercise. While low levels of either may only cause minor blips in performance and wellbeing, at moderate-to-severe levels, they can lead to serious illnesses and/or very reduced physical capacity.

To help, we asked Shaw to share her nine tips for staying hydrated during a marathon (or shorter distance) in order to stay energised, happy and motivated.

These tips are great, whether you’re running a 10k, half marathon, marathon or ultra. You don’t have to be a marathoner to benefit from good hydration practice! Simply adapt Shaw’s guidelines to suit the distance you’re doing. Celebratory post-race beer not included.

Again, you’re probably not going to know how much you’ve lost when you’re standing at the finish line, so the best thing to do is be conscious of how often you’re peeing and what colour it is. If you’ve run a five-hour marathon and haven’t peed for six hours, it’s probably better to prioritise pints of soda water initially by the time you make it to the pub!

Enjoy a quick mobility session to help you feel loose and limber ahead of your race, with one of our 15-minute mobility classes.

Related posts:
09/24/2021 Fitness Comments Off on How to hydrate properly while running to feel full of energy
Diets News