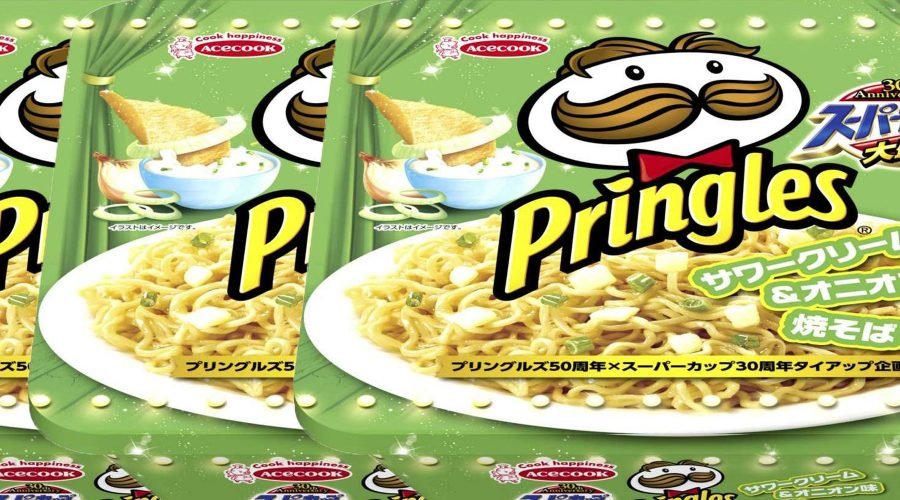 Instant ramen has long been a staple food group for college kids, recent grads, and those who just want a quick, cheap and easy meal or snack. A partnership between Supercup and Pringles Japan just took the instant noodles game to a whole new level, though.

The partnership between the two iconic brands is also in celebration of Pringles 50th birthday. The Supercup Big Pringles Sour Cream & Onion consists of “addictive dry noodles with fresh sourness of ‘Sour Cream & Onion,'” per a press release. The Jalapeño & Onion is “ramen with long lasting spiciness” reminiscent of the Pringles flavor. Both products launched October 15.

The brand says it planned the collaboration with Pringles to bring “surprise” and “new tastiness” to customers.

They’re also launching Chicken Soy Ramen and Squid Dry Noodles-flavored Pringles beginning October 23. Pringles says it was challenging trying to recreate the taste of the Supercup varieties in a potato chip. “As we don’t have garnish and soup for potato chips, we needed to replicate the taste only with a seasoning powder,” the press release stated.

Though these limited-time Pringles and ramen product mash-ups are only available in Japan, you could always try a little DIY. Make a package of instant ramen, and then crush up a handful of Sour Cream & Onion Pringles. Add the chips to the noodles, and *chef’s kiss* you’ve got Sour Cream & Onion ramen right at home.