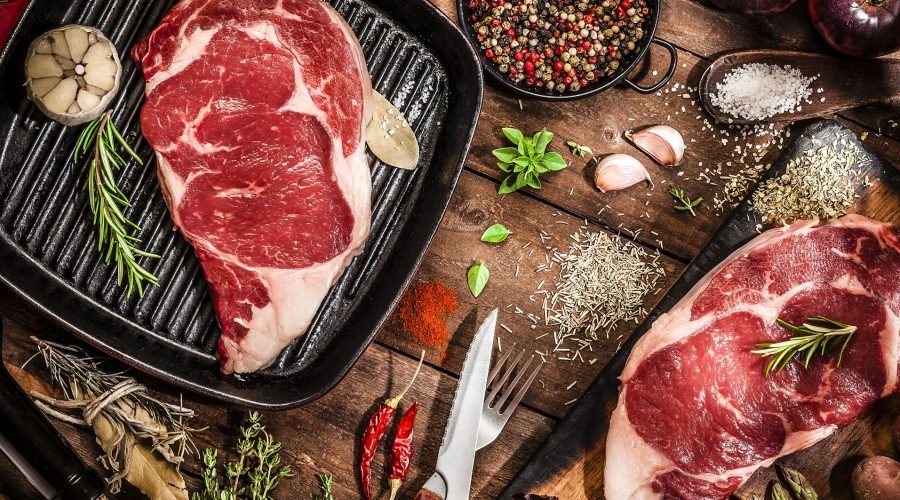 The carnivore diet is incredibly simple, and also terrifying. Here is the diet: You eat meat, and nothing else.

A sort of extreme take on the keto diet, the carnivore diet has supposedly helped people lose weight and rid themselves of various health problems. I agreed to try it for the sake of journalism, and because the possibility of losing some weight sounded pretty good. Still, I was worried. I’m a firm believer in taking regular fiber supplements; what if I end up like the guy who had to have 28 pounds of feces surgically removed?

Carnivores trace the roots of their diet to indigenous peoples like the Inuit, who survived primarily by killing animals and eating them (studies show their genes may be particularly adapted for this). But the diet got some mainstream attention early this summer, when big-name pseudo-intellectual Jordan Peterson endorsed it on Joe Rogan’s podcast. Peterson and his daughter, Mikhaila—a lifestyle blogger—swear by the all-meat diet, which they’ve followed since late 2017. Dr. Drew Pinsky jumped on the carnivore bandwagon, too: “I’ll be goddamned if within three days I didn’t feel unbelievable,” he told the New York Post.

I knew the basics of the carnivore diet before I went it. The is to get your body into ketosis, so your body starts burning fat for energy instead of carbohydrates. It’s like the keto diet, except way more limiting in terms of what you can eat.

“Out of the diets I’ve been asked [about], I think this is one of the most extreme, in terms of the restrictions, that I’ve ever looked into,” Scott Hemingway, a clinical dietician at the University of North Carolina’s Health Care system, would later tell me after I tried the diet.

I probably should have called him before jumping headfirst into meat land.

“Out of the diets I’ve been asked [about], I think this is one of the most extreme.”

I’m 28, 6 feet tall, and about 200-205 pounds. I work out three or four times a week and eat reasonably healthy. I drink on the weekends, but rarely during the work week.

As far as rules for the diet go, I opted to follow a more lenient version of the diet that I found on this blog: any meat, butter, hard cheeses, and eggs are okay. For drinks, I’d stick to water and iced green tea. (I don’t drink coffee, but that’s allowed, too). The diet usually only allows Himalayan pink salt, which seems like a scam carried out by the Himalayan pink salt lobby. vowed to break that and use whatever dry seasonings I wanted to get me through the meat consumption, as long as they don’t have any actual caloric or nutritional value.

I start the carnivore diet with scrambled eggs, because I haven’t gone to the store to buy groceries and meat. I soft-scramble five eggs with a generous pat of butter and Himalayan pink salt and pepper. Five eggs is more eggs than I would usually eat, but usually I would also eat something other than eggs, like bread or vegetables. The half jar of salsa I bought and didn’t finish before agreeing to begin this diet taunts me from the refrigerator shelf. I eat the eggs out of a bowl with a spoon, and they’re pretty good.

Twenty minutes later, I’m kinda hungry again. I drink another glass of water. I do some work and head to the store to buy steak.

At the store, I feel like an insane person. I apologize to the cashier and make a half-assed attempt to explain why I’m buying two pounds of ground beef, five steaks, two gigantic packages of chicken legs, blocks of cheddar cheese and 18 eggs. She smiles and says “Good luck!” I thank her, but now I am worried.

I get home and deal with these worries by making a steak. I don’t make steak very often, and it’s great! My roommate’s dog, who is also not exposed to the smell of steak very often, is freaking out. Maybe this won’t be so bad!

I made steak and eggs for breakfast, which was pretty delicious. Last night I made a pile of hamburger patties with sharp cheddar cheese for dinner and ended up eating three of them, which immediately gave me a headache and a stomachache. Now I have nothing to snack on, so I’m eating another hamburger patty, which is gross because I didn’t reheat it. I end up finishing the other three patties for dinner with copious amounts of cheese and some hot sauce, which I figure is fine because it has zero calories and zero sugar or carbs, and because I am still protesting the Himalayan pink salt lobby. Later, I get hungry again, and fry two eggs as a light snack.

So far I’ve eaten nothing but beef, eggs and cheddar cheese for two days, so I make chicken thighs and eat four of them. I poop for the first time since I started the diet, a very small, dense amount. I’m feeling vaguely nauseous—and while the chicken is good, I’m not particularly hungry.

I go to the gym for the first time in almost three weeks, because I had the flu. Holy shit, working out was a mistake. I’ve been training at Unlimited Martial Arts for the past six months or so, and I join an afternoon boxing class. It turns out to be just me and one other student, so my teacher, Phil, has us work on defensive drills and sparring, and I die. I just absolutely die. I have zero energy and it feels, literally, like I’m punching under water.

Every time I get hit with a body shot, it feels like I’m going to vomit out the entire bag of cement (three days of steak) in my stomach. I end the workout and am so gassed that I forget to have Phil take a picture of me looking gassed for the article, but honestly, it was not pretty.

“I have zero energy and it feels, literally, like I’m punching under water.”

I weigh myself after the workout, and I’m 195 pounds. That’s 10 pounds lighter than usual. Now, there are a lot of factors that could explain this: I had the flu recently, and I wasn’t eating a ton. I also sweat out about 2 pounds of water weight in an average workout. So I estimate I lost at least 4-5 pounds of net weight in 3 days of the the diet.

It’s dinnertime, and my roommates are enjoying a plate of grilled salmon, avocado, and caprese salad, and they offer my girlfriend and me some leftover caprese. They know about the diet but they are heartless, so to beat them at their own game, I eat a piece of caprese. The tomato and mozzarella is fresh and tangy and cool and it is literally the best thing I have consumed in my entire life. I try to make steak for dinner but my head is pounding and I feel like I’m going to puke at any minute. The only things I’ve consumed today are the four chicken thighs this morning.

I make steak, for me, and roast sweet potatoes to go along with it for my girlfriend. As I try to take the first bite, I start having heart palpitations and get horribly dizzy, at which point everyone in the house tells me I am an idiot. My girlfriend looks concerned, which is nice of her, but I have done this to myself, and only I can free myself from this horrible prison of meat.

She tells me to eat the sweet potatoes. I look at them. They smell wonderful. I look at my plate, which has only steak. I cannot eat another bite of the steak. I eat a small piece of sweet potato, and it is also the best thing I have ever consumed in my life. Better than the caprese. This breaks me. I eat the rest of the pan of sweet potatoes, and the transformation is shocking: my headache starts to go away; my nausea subsides. I’m done with being a carnivore.

After my carnivore diet

I wanted to know a bit more about why my body crashed so hard on the carnivore diet, so I reached out to Hemingway, the dietician.

My first mistake was trying to exercise so soon into a ketogenic diet. Depending on your diet and exercise routine going in, it can take anywhere from three days to several weeks to get your body comfortable on a keto diet, Hemingway explained. (Clearly, I was not adjusted after three days.)

The lethargy that comes from your body trying to switch energy sources could definitely have explained my unpleasant symptoms, he said. And there’s a very good reason the sweet potatoes cured me.

“You essentially starved your brain’s primary source of energy for three days and then instantly gave it what it was craving,” Hemingway said, laughing. “That’s the reason you felt better.”

Some people see great results on the keto diet—but is there any real benefit to taking it a step further and cutting out healthy foods like broccoli and carrots?

“The removal of all vegetables is not something I would personally recommend,” Hemingway said. “There’s very little science if any science to support any negative effects of consuming vegetables on our overall diet.” There’s also no real reason to cut out fiber altogether.

“Typically I stay with the science,” Hemingway said. “If people find things that make them feel better or that works for them, I’m all for supporting that. However, there really is no science to back these claims currently, and there’s definitely no research to determine the potential long-term effects, whether beneficial or harmful, on a fad diet like this.”

I am not a dietician, but I did try the diet, and I’ll leave you with this: I hated it. Maybe some people respond well to it, but I sure as hell didn’t. If you want to try a standard keto diet, check out our tips—and maybe don’t go to the gym three days in.

Related posts:
11/01/2018 Diet & Food Comments Off on I Tried the Carnivore Diet and It Broke Me After 3 Days
Diets News