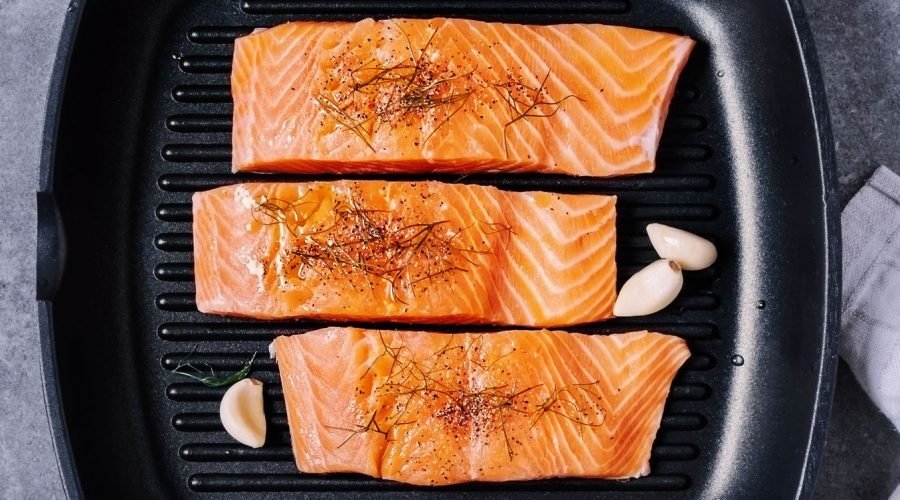 Step up to supermarket seafood counter and your head starts to swim. Farm-raised, wild-caught, organic, Sockeye, Copper River, sushi-grade—it’s enough to make you want to just go grab a pizza. But nutrition experts are always raving about this fatty fish. It’s a great source of lean protein (20 grams per 3 ounces), heart-healthy omega-3 fatty acids, and anti-inflammatories known as carotenoids.

Regularly eating fish, in general, may slash your risk of heart disease, combat asthma, and even boost fertility.

But if you’re like most American men, you’re still not consuming the recommended two 3-ounce servings of fish a week. Could it be because you’re confused? Let’s work that out.

Farm-raised salmon is definitely better than nothing, but if you have the option of wild-caught, those fish tend to be higher in omega-3s fats. Though improved methods in salmon farming are bumping up overall omega counts, wild is still king. And speaking of kings…

King or Chinook or Sockeye or Coho or pink or chum?

Yeah, there are a lot of varieties of salmon. Don’t drive yourself nuts. The omega-3 levels of wild salmon range from 700 to 1,800 milligrams per 3-ounce serving, says Debbie Petitpain, RD, a spokesperson for the Academy of Nutrition and Dietetics. King, Chinook, and Sockeye tend to land in the higher range. That’s because their the largest, fattiest fish. That fat helps insulate them in frigid temperatures, but it also translates to more omegas for you.

On the lower end of that spectrum lies your Coho, pink, and chum, varieties you’re more likely to find in pouches and cans. That doesn’t mean you’re still not netting a payload of omegas by eating these varieties.

Here’s a good idea: Taste a bunch of salmon and find one you like. That’s the one you’re likely to eat the most of.

Okay then, fresh or frozen?

Unless you live in Alaska and you’re pulling the lunkers out of the rivers yourself, it’s likely frozen. Any fishmonger telling you otherwise may be trying to pull one over on you. And, look, previously frozen fish is just fine. Flash freezing, which is often done on the boat, preserves all the fish’s nutrients and most of its taste. Some fish counters may mark defrosted fish with a “PF,” which stands for “previously frozen,” but honestly its not a huge deal.

What about this whole “sushi-grade” thing?

Well, freezing also helps eliminate any parasites—virtually all salmon that’s called “sushi or sashimi grade” has been frozen to a specified temp for a set number of days, according to law. Laws do vary from state to state, however, and there isn’t a national body that grades fish the way the USDA grades beef, so “sushi grade” is largely marketing speak.

Do I buy the fish skin-on or skin-off?

Up to you, buddy. If you’re a fan of the crispy skin, wonderful. Think that’s gross? Skip it. Petitpain says you won’t miss out on any nutritional perks.

Okay, I’m sold. Now how the heck do I cook this thing?

While there’s no wrong way to eat salmon, cooking methods such as baking and steaming are less stressful to the flesh and most likely to retain nutritional benefits, says Annie Byrne, fishmonger and retail manager at Coastal Seafoods in Minneapolis. Petitpain seconds this. Lower-heat, moisture-based cooking methods such as poaching and steaming are better at preserving the nutritional qualities of the fish than high-heat methods like drying and grilling. Scientists have even studied this.

But if we’re being honest, eating salmon at all is a great thing. So cook it how you like it.

Annie Byrne, fishmonger and retail manager at Coastal Seafoods in Minneapolis recommends cooking it as you would a good steak or pork chop. Roast or pan-sear it to medium-rare (when a meat thermometer into the thickest part of the fillet registers between 115 and 120°F) and then removing it from the heat. The fat will help “carry-over cook” the rest of the fish, which will be perfectly tender after you let the fish rest at least five minutes before digging in.

Wait, what’s that white stuff leaking out of fish after I cook it?

Oh, don’t be such a baby. It’s totally normal and it’s called “albumen.” That’s the same stuff in egg whites. It’s a protein. Some people say that if you see the albumen surface, you’ve overcooked the fish. Not true!

I think those are all my questions. Thank you, Men’s Health.

Related posts:
11/19/2018 Diet & Food Comments Off on Everything You Need to Know About Eating Salmon
Diets News