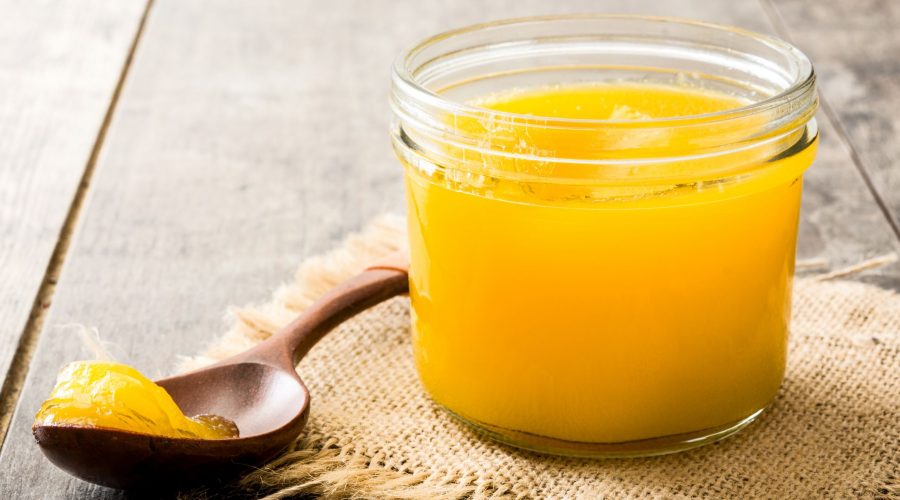 Throw a stone on Instagram and you could probably hit at least five different #influencers who swear by cooking with ghee. The popular cooking fat is supposedly dairy-free, natural, and can be a complete substitute for butter. (And it’s been a staple of Indian cooking for literally thousands of years.)

Sounds pretty awesome, right? Before you totally ditch butter for ghee, let’s make sure it keeps up with your lifestyle. Get your pens ready, vegans, because this one’s for you.

“The short and sweet: ghee is not considered vegan,” says dietitian Nora Minno, R.D., C.D.N. She says that ghee is a type of clarified butter that’s made “by simmering butter until it separates into liquid and solid forms.” After the milk solids are skimmed off the top and the water is forced to evaporate, you’re left with ghee.

Even though the milk content is mostly gone, ghee is still made with butter, which comes from an animal product (a.k.a. cream). Remember, vegans don’t eat anything (meat, eggs, dairy) that came from animals—although some do make an exception for honey.

This is pretty tough news to break, tbh. But vegans, don’t worry: Olive oil is a great cooking substitute, says Sonya Angelone, R.D., and has no animal product in it. (Plus, it’s pretty healthy.) So there’s that.

Okay, so ghee is not vegan. But I don’t really get how it’s different from butter…

It’s all in the composition, says Minno. “Butter is comprised of butterfat, milk solids, and water, whereas ghee is simply the butterfat.”

Ghee also has less water than butter, and zero protein, carbs, sugar, or calcium. Butter has slightly higher levels of all of those things—although otherwise, they’re pretty comparable.

Both are pretty high in saturated fat (you know, the stuff that can be bad for your heart in excess), so definitely be mindful of your intake.

While ghee is a no-go for vegans, Minno says it might be easier for people with lactose sensitivities to digest. Basically, because the milk solids have been removed, the leftover ghee will only have minimal traces of lactose, says Minno. (It still has some though, so if you’re super-allergic, steer clear just to be safe.)

The bottom line: Ghee is low in lactose, but it is made from animal products—so it’s still not vegan. Luckily, you can still rely on plant-based fats like olive oil.

Related posts:
10/31/2018 Diet & Food Comments Off on Can You Eat Ghee If You’re Vegan Or Is That Totally Cheating?
Diets News