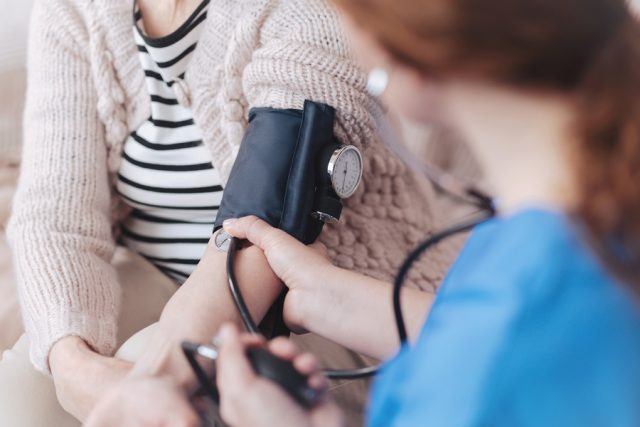 High blood pressure affects one in three Americans. It’s one of the most common heart problems, and it can lead to side effects such as severe heart disease or heart attack. But there is another problem that can come from high blood pressure, and the connection gets overlooked by most people: Dementia.

When you have high blood pressure, it means that the pressure against your artery walls is above normal. As this pressure increases, it gets harder for oxygenated blood to move throughout the body. The artery walls thicken to be able to push this blood through. But over time, the walls thicken too much and create a blockage in the artery. This can cause a heart attack if it is near the heart muscle or a stroke if the blockage occurs in the brain.

A blockage in the brain means less oxygen to the brain

We breathe in oxygen because our brains need it to survive. That oxygen is transported to the brain via the blood. When those artery walls that pump blood start to thicken, the arteries become partially blocked. This means less oxygenated blood is passing through, and the brain isn’t receiving the necessary amount of oxygen it needs. Over time, this lack of oxygen causes brain cells to die.

When brain cells die, the brain can’t function properly, which may lead to dementia

Dementia occurs when brain cells die. Brain cells are necessary to keep the brain’s cognitive thinking skills sharp, so the fewer you have, the worse it is. When an artery blockage causes these cells to die, it can lead to something known as vascular dementia. Vascular dementia presents the same symptoms as any other form of dementia. The brain’s cognitive skills are impaired, meaning you might suffer memory loss, confusion, and trouble problem solving.

Once vascular dementia is present, it cannot be reversed. However, there are different degrees of the disease. Vascular dementia can cause mild cognitive impairment, and with treatments to help blood flow, such as blood pressure medication, the symptoms can stay relatively mild. But if the condition doesn’t get any kind of preventive treatment, it can worsen into a severe disease.

There are easy ways to prevent high blood pressure

Dementia is scary. In most cases it isn’t preventable, but vascular dementia is. There are easy ways to make sure you aren’t affected by high blood pressure as you age, and a lot of it has to do with diet and exercise. Getting outside each day to get some exercise, even if it’s just taking a walk, can do great things for your heart. Try to get at least 150 minutes per week of moderate physical activity or 75 minutes of rigorous physical activity. Make sure not to load your diet up with sodium, since sodium causes blood cells to retain water and leads to high blood pressure. While you may not be able to avoid dementia, preventing yourself from getting high blood pressure will at least lower your chances.