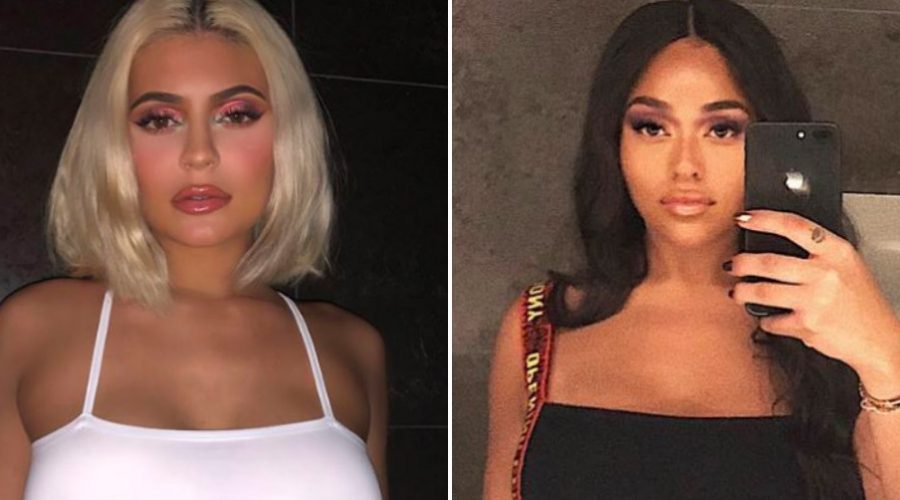 Since launching Kylie Cosmetics nearly three years ago, Kylie Jenner has called on many of the most important women in her life to produce exclusive makeup lines together. Nearly all of her sisters have Kylie Cosmetics collections — Kendall, where you at?! — as does mom Kris Jenner, so it was only a matter of time before she turned to her longtime best friend Jordyn Woods for a collab. Luckily for fans of this dynamic duo, Jenner and Woods took to Instagram on Monday night to hint that their joint collection will be hitting the Kylie Cosmetics website very, very soon.

The BFFs both uploaded photos that appeared to be taken in a fancy bathroom after completing the photo shoot for their collab. "Just wrapped shooting my new collection with @jordynwoods dropping next month ? can't wait for u guys to see this!" Jenner captioned the first of several photos, in which she wears a white crop top and bubblegum pink leather pants. The 21-year-old appears to be wearing a shimmery pink blush, coordinating pink eyeshadow, and a peachy-nude lip gloss. In her own post, a mirror selfie in the same bathroom, Woods wears a slinky, black Opening Ceremony bodycon minidress with bronze-y, glowy face makeup, a dramatic smoky eye, and what looks like the same gloss as Jenner's.

That gloss seems to be the standout product from the girls' collab. In the caption of another post from Monday night, Jenner wrote, "this gloss though." While she deleted that post and replaced it with other, caption-less shots, Woods uploaded a screenshot to her own Instagram Story and affirmed, "Straight facts. Our gloss is addicting."

On Tuesday, the official Kylie Cosmetics account reposted a few of Jenner's and Woods's shots, confirming in the caption that their team-up will, indeed, be unveiled sometime in September. Though they have yet to reveal a specific release date, September technically begins in just four days, so there's a good chance we'll be seeing the Kylie x Jordyn collection drop — and uncovering the mystery of the "addicting" lip gloss — sooner rather than later.