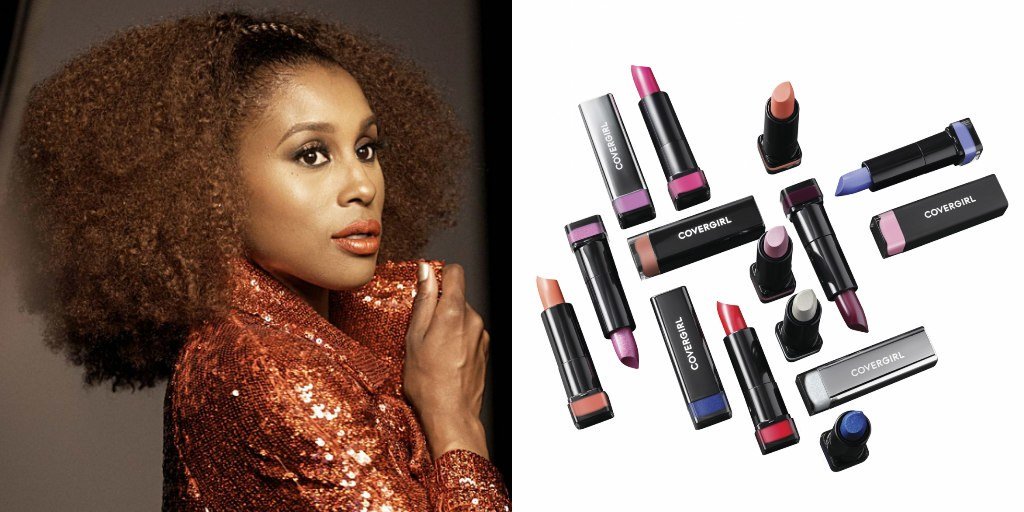 Issa Rae is known for her relatable performances — so much so that she was recently nominated for an Emmy. And being so comfortable, authentic, and downright radiant on camera, it's no wonder CoverGirl tapped her for a new video celebrating the brand's 48-shade Exhibitionist Lipstick collection, which launched in June. In fact, they even asked Rae to bring along three of her friends to portray something we've all done: putting the finishing touches on our makeup looks while joking around with our girls in the car on the way to a night out. It's just the latest example of CoverGirl's reinvented vibe — one of the first beauty campaigns Rae has ever seen herself in, both literally and figuratively.

"My friends are funny as shit and they wear makeup. Those aren't mutually exclusive things."

"Even initially before the meeting happened, before I got to sit down with them, I was just like, 'I'm not that girl. I'm not the serious makeup girl.' You have so many commercials in the past where makeup is featured and the women are so serious. Or they're laughing, but still constructed in like a, 'Who are these people?' way," Rae tells Allure. "[CoverGirl] is empowering me to be like, 'We don't want you to do anything that does not feel you.'" And part of that meant inviting her real-life friends along to help show some of the diverse colors of Exhibitionist Lipstick.

"That was dope — embracing the humor," Rae says. "My friends are funny as shit and they wear makeup. Those aren't mutually exclusive things." You can instantly see both that humor and that love for lipstick in the new two-minute clip, called "Shade for Shade." Rae and her friends Megan Lawson, Devin Walker, and Abenet McMullen are shown playfully teasing each other about their color choices — shades of purple, black, nude, and the metallic red Rae wears in the video, Ready or Not — all the while well aware they look amazing in each and every one.

Rae is also well aware that some teasing — the internet troll kind — is meant far more mean-spiritedly than what we see between her and her friends, and more often than not, it's focused on appearance. Luckily, when it happens to her, she's figured out an effective way to clap back without saying a word. "I don't know who did this first, but it really works. If it's on social media, I usually just send them a picture of themselves, and that'll usually do the trick. No words are needed," Rae says. "Like, first of all, who are you? Worry about yourself."

One of the things that I grew up hearing was that black girls can't wear certain shades, and I feel like that is completely outdated.

That's why this new Exhibitionist Lipstick campaign is so refreshing — it's about not worrying what anyone else thinks of your makeup choices, as long as it makes you happy, even if that's a green lipstick or a shade of nude you've been told isn't flattering for your skin tone. "One of the things that I grew up hearing was that black girls can't wear certain shades, and I feel like that is completely outdated, and it's been proven wrong time and time again. There are always gonna be some colors that look beautiful on certain people, and I feel like that should be embraced as well. But I don't think that people should be limited," Rae says. "I love that people are experimenting. It's a form of self-expression, and if that gets you closer to making you feel like you, then no one should get in the way of that."

Watch the new "Shade on Shade" video below:

Related posts:
07/21/2018 Beauty & Balance Comments Off on Issa Rae Has a Genius Clap Back for Trolls Who Don’t Like Your Lipstick
Diets News