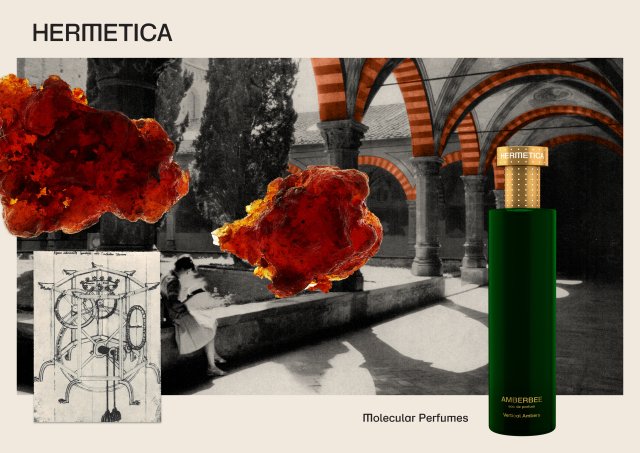 Hermetica is going wider than the Internet.
The fragrance brand — the third from Memo Paris founders John and Clara Molloy — launched online in July with 18 scents that retail for $195 each. Created in partnership with Symrise, the fragrances are clean, cruelty-free and the result of green, aka sustainable, chemistry. They are also formulated using a patented, alcohol-free technology that allows them to be less aggressive on the nose and better for the skin.
"When you pick up a glass of whiskey and put it to your nose, the alcohol is very effective, but when you bring up a glass of Champagne, the bubbles of oxygen bring it up constantly," said John Molloy. "What we’ve done is time-released, like a locomotive, the perfume on your skin. You get no overblow on your nose, you don’t have to smell any coffee. You could smell thousands of these fragrances forever."
Though Hermetica isn't the first alcohol-free fragrance brand, Molloy noted "there’s never been a worldwide success and no one has managed to get long-lasting multiple types of fragrances."
He declined to offer sales projections, but industry sources estimate Hermetica will do $20 million in first-year retail sales. Memo Paris, which is sold in 35 countries, is said to do $50 million in annual retail sales.
Hermetica launched as a digital-only brand, offering sampling kits and an online quiz to match customers with their preferred scent. Now the brand is going offline via an exclusive retail partnership with Bloomingdale's and the opening of its first boutique.
"We have a relationship with John and Clara, who are partners in Dubai, where we’ve sold their other fragrances — Memo and now Floraïku," said Tony Spring, chairman and chief executive officer of Bloomingdale's. "I was inspired by John and Clara’s passion, vision and storytelling ability. A digitally native opportunity and an exclusive certainly made it even more interesting to us."
Hermetica launched on bloomingdales.com on Sept. 15 and will begin to roll out to six Bloomingdale's doors starting Oct. 10. Stacie Borteck, the retailer's vice president and divisional merchandise manager of cosmetics and fragrances, said it is planning a grand opening at the New York flagship on Oct. 10, as well as "experiential events" to educate customers on the brand and a "robust digital campaign."
Retail partnerships have worked well for Memo. According to Molloy, Memo was the number-one beauty brand in Harvey Nichols in London until "Rihanna ousted us from the top spot" with Fenty Beauty. Memo's largest markets are Europe — particularly France, its home market — and Russia. Molloy expects the U.S. to be "on equal weights" by 2019.
The first Hermetica freestanding boutique opened in Paris last week. The 390-square-foot shop is on the city’s Right Bank, not far from the Avenue des Champs-Élysées, and had a debut that came one week after a corner for the brand opened in London’s Harvey Nichols.
Having a store in Paris was a dream for Clara Molloy.
“I’m Parisian, and when you do fragrance your dream is to be in Paris. It’s the heart of it all,” she said. “For me, it’s a French art.”
The boutique has walls of emerald green. “To me it’s very alchemic, a bit like a sorcerer’s atelier,” she said, adding it is also meant to be reminiscent of a “studiolo,” or an art-filled studio dating from the Middle Ages. At that time, curiosity was rife about mineral stones, such as amethysts, and their properties. So, for that reason, rough gems decorate the shop.
The Hermetica fragrances are displayed by scent family, on wooden fixtures. Videos on the walls show five different artists’ interpretations of the project.
Hidden away in a wooden cabinet behind the scents is Hermetica’s own codex, or book full of information about individual ingredients and facts about them.
“Most of them are in our fragrance. Some will be,” said Molloy. “It’s also a way of sharing our knowledge and getting people interested in where come from, their history and effects.”
On another wall is a diagram showing ingredients and how they interconnect. Ateliers will be hosted in-store about the perfumes.
Already, other boutiques are slated in the near future.
“We have seven stores planned over the next 24 months in key cities and depending on the availability of key locations a mix between franchise stores with partners and our own fully run stores,” said John Molloy.
Hermetica is also carried in doors in cities such as Amsterdam; Moscow; Dubai; Doha, Qatar; Riyadh, Saudi Arabia; and Kuwait City, Kuwait.
“We have a huge rollout plan for 2019,” said Molloy.
More from WWD.com:
Le Labo Releases Tonka 25, First New Scent in Three Years
Gender Fluidity Is Creating a Buzz In Beauty
Source: Read Full Article