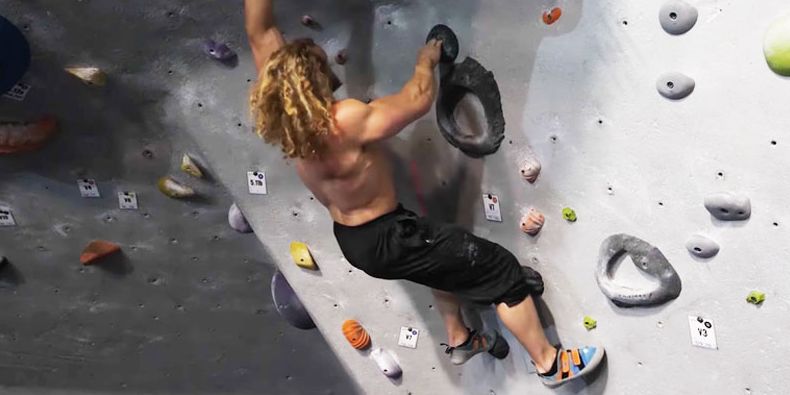 Bodybuilder and acrobat Jujimufu has pushed himself to the limit with gymnastic conditioning training, a rough rugby induction, and the highly difficult (and dangerous) barbell backflip. Now he’s taking his feet off the ground completely, taking on YouTuber and pro climber Magnus Midtbø in a bouldering competition.

Before scaling the wall, the competitors aimed to even the playing field. Since Juji weighs 232 pounds and climbing requires him to lift his own bodyweight, Magnus dons a weighted vest that gives him an extra 80 pounds or so, bringing him up to Juji’s level. As soon as the vest goes on, Magnus comments on how surprisingly hard it is to carry. The new weight is also all focused on his upper body; on previous occasions when he’s tried climbing with weights, it’s been balanced on his ankles too. “It must be so hard for somebody at your weight to rock climb,” he says to Juji. “I don’t think anybody can really understand how hard it is.”

The first round of the competition is a V0 (the easiest scale in bouldering). Juji completes the V0 in 20 seconds, but even with the added weight, Magnus ascends faster, reaching the top in 15 seconds.

Magnus also beats Juji in the slightly harder V1, completing it in 14 seconds, while Juji takes 27. “I thought this would be different,” says Juji. “I thought he’d be breathing heavy and grunting and having to take a second chance on this.”

“You have the strength, obviously,” says Magnus after beating Juji on the V2 at 18 seconds to 36, “but technique is important in climbing.”

Next up is the V3, a much steeper challenge which tests the climber’s grip strength. “On a steep one, the weight is going to matter more,” says Magnus. “On a less steep one, I can put more weight on my feet and use more technique, on this one I can’t… If I fall uncontrolled, this is going to be the death of me.”

Juji fails to complete the V3, falling after 47 seconds, while Magnus completes it in 17.

Moving onto the V4, Magnus finally starts to feel the toll of the extra weight. 17 seconds into his climb while reaching for a hold, he falls. “It feels like I’m going to break my back doing that,” he says, before trying a second time and reaching the top in 18 seconds.

When it comes to the V5, Magnus falls while attempting to swing from one hold to another, while Juji doesn’t even make it off the ground. While the V-scale in bouldering goes all the way up to 17, this is the point where both Juji’s technique and Magnus’ ability to carry the extra weight both run out.