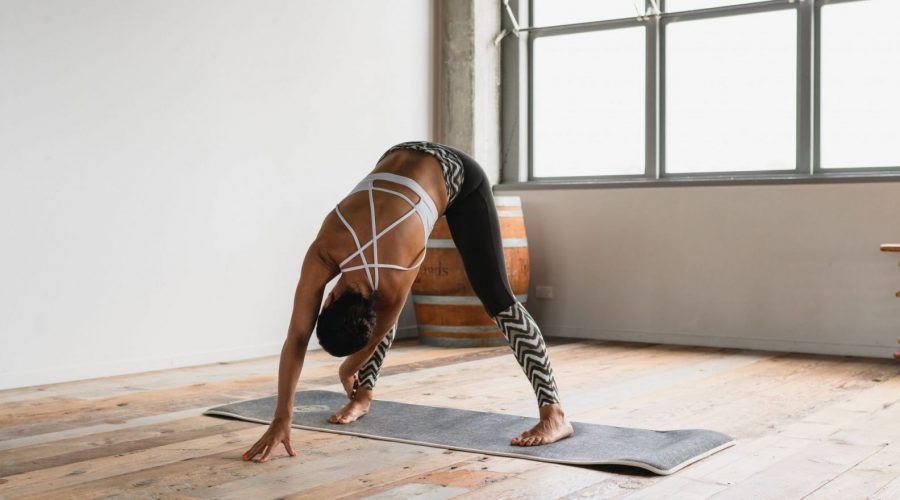 Desperate to manage the symptoms of a hormonal condition that affects 1 in 10 women in the UK, one writer found that yoga did more than restore the balance in her life – it helped her to manage everything about her PCOS.

For the fourth night in a row, I was leaving the busy newsroom past 3am after a late shift fuelled on midnight sugar spikes and caffeine, worrying all the while that I was wreaking havoc with my body clock. The following week, I’d be back to 6am starts.

On the outside, stress showed in my appearance. My hair was falling out, thicker and faster, and all across my chin clusters of spots were painfully inflamed. I blamed the night shifts for weight gain around my belly and low moods but it was all hinting at a bigger picture playing out internally.

These are all symptoms of my condition, Polycystic Ovary Syndrome (PCOS), the most common hormonal disorder affecting women of reproductive age in the UK. PCOS is characterised by imbalances in testosterone, insulin and cortisol that affect overall health and appearance, often first showing signs in our late teens or early twenties. For some, it presents as excess body hair (hirsutism) or irregular/lack of periods (amenorrhea). For all of us, it promises the silent threat of Type 2 diabetes or heart disease in later life, not to mention being among the most common causes of female infertility.

This is how yoga can benefit your mental health

Ever since I was diagnosed at 22, I’ve known that stress exacerbates my symptoms. Yet there’s very little doctors can do to intervene unless you’re making plans to have children. What they did tell me, is that I must keep my weight and stress levels down, which was easier said than done as I raced ahead in a dream job at 25, while my body kept telling me to slow down.

That was when, looking to redress the balance, I turned to yoga. Initially, it was a great way to lift the fog before a night shift but as time went on, practising yoga regularly seemed to be doing more for my body than keeping me zen. Perhaps it’s coincidence, but I found my spots weren’t as angry after a week of yoga. My moods seemed more consistent and I was no longer nodding off during relaxation pose (Savasana) because I was sleeping better at night.

Little did I know this was no coincidence. New research published last month in the Journal of the American Osteopathic Association, found that women with the condition (aged 23-42) who started one hour of yoga three days a week, had decreased testosterone levels, anxiety and depression after three months, compared to a control group.

“There is a huge demand for non-medical treatment options to manage PCOS symptoms,” says the study’s principal investigator Diana Speelman. “The improvements we saw in the underlying hallmarks of PCOS indicate that regular mindful yoga practice could be an effective therapeutic option.”

For me, it’s difficult to separate yoga from a general improvement in my wellbeing. Often, when I come back to the practice, it’s part of a concerted effort to be kinder to myself after a hectic few weeks. It goes hand-in-hand with eating better, taking more time to rest and earlier nights, which could explain some of the external benefits I notice in my spots and oily skin.

What I can’t deny, is the instant bliss I get after practise – whether it’s a 20-minute flow or an hour-long class. It makes me feel awake yet well-rested. I feel powerful, in my muscles and in my mind, without the three-day ache I get after a run. During a busy day, it can free me from toxic thoughts that make my head heavy. For me, the breath (pranayama) feels like an important part of that, because where else in your day do you steady your thoughts by focussing on the simplest of human processes like breathing?

So, do the effects depend on the type of yoga you take? In the aforementioned study, participants did a flow called vinyasa, in the absence of any advanced positions (asanas).

Stretching: this mobility routine will help you avoid stiff muscles

Sarah was diagnosed with PCOS at 23 and began teaching yoga as a way to effectively tune in to her body and hormones. On the postures that work best with the condition, she advises: “When your head is lower than your heart, like in Downward Facing Dog, it stimulates blood flow whereas restorative poses can actively help to balance our hormones.

“A backbend like Camel Pose (Ustrasana) opens the heart and the neck where the thyroid gland is. Similarly, Fish Pose (Matsyasana) works wonderfully for stimulating a passage of energy to the lower body called the throat chakra. Even though we don’t always see it, yoga does so much more for our bodies than muscle strength and stretching.”

Without yoga, I don’t like to think what six more years of stress would have done to my body. If I go weeks without practice, the feeling of balance fades and it’s easy to lose the muscle tone that I’ve built. With the eb and flow of my PCOS symptoms, I’m reminded to get back on the mat. Like most 20-somethings, I still get spots occasionally but nothing compared to the never-ending cycle of cystic acne that stretched across my chin for years. My hair has filled out in the thinner patches and doesn’t fall out like it used to. Finally, as I approach a time in my life where I might finally find out what’s going on in my ovaries, I understand that yoga was never going to cure my PCOS but I’m thankful that I found a natural way to minimise my symptoms.

In any day, my yoga mat will be my happy place: a humble rectangle of sanctuary in my house or at the studio. As I write this, I already want to practice again because even though you know you’re being good to yourself for those few minutes of the day, you never know quite how much good it’s doing on the inside.

THE SCIENCE BEHIND YOGA AS A THERAPEUTIC TREATMENT FOR PCOS

To explain the systems at play here, hormone specialist Dr. Amalia Annaradnam from the London Hormone Clinic told Stylist: “Women with PCOS typically display insulin resistance. This means their tissues do not respond to insulin produced by the pancreas and overproduce more to compensate.

“Excess insulin contributes to the increased production of androgens like testosterone, and increase the body’s sensitivity to androgens: which leads to excessive hair growth, thinning head hair, acne and lack of ovulation.

“Research suggests that yoga is a practice that helps to relax the sympathetic nervous system, which is the system that activates stress hormones like adrenalin and cortisol.

“Stress can exacerbate all existing hormonal imbalances so hypothetically speaking, if yoga can help to reduce that stress activation, it might help to minimise androgen sensitivity.”

For more information about PCOS, including the symptoms and how to find treatment, go to the NHS website at nhs.uk/conditions/polycystic-ovary-syndrome-pcos/.

Related posts:
10/08/2020 Fitness Comments Off on “How yoga helped to ease my PCOS symptoms”
Diets News