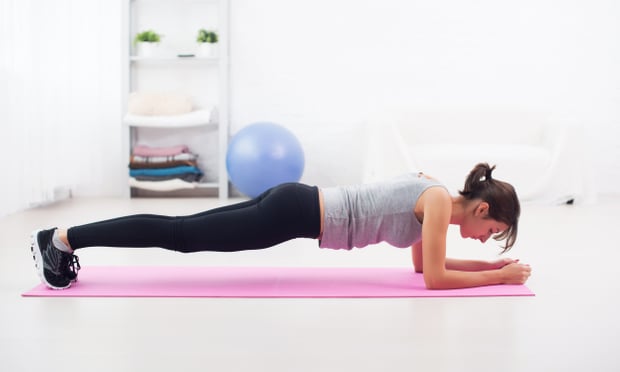 The plank is the easiest core exercise known to man, woman and fitness model, right? When done correctly, it strengthens your abdominal region, bottom, upper thighs, arms and shoulders. It can be done anywhere, anytime, in almost any clothing and as competitively as you like. (Planking, the exercise, shouldn’t be confused with planking, the meme, a fad for being photographed prostrate, often in a public place.) Last year, a Chinese police officer held the position for an unthinkable eight hours, one minute and one second, setting a new world record.

Yet many personal trainers and models are still doing it wrong, whether they exhibit a concave lower back, a hen-pecking neck or a bum facing skywards.

Planking (or “doing a plank”) is a bit like playing the recorder: it’s so easy to learn the basics that mastering it seems unnecessary; you can’t feel or hear how awful you are until you see or hear it being done well.

So, how do you plank like a virtuoso? First, the plank is not the same as the yoga move downward dog, nor is it the same as the so-called cobra or any other back-bending position. In fact, planking is about staying completely horizontal and bears no relation to any living animal. It’s a bit like meditation, requiring complete stillness, ideally for minutes on end. Underneath that poised exterior, of course, your muscles should be humming with effort and your skin pouring with sweat. Don’t wipe it off, though, because you will have ceased planking. Stay still and squeezed until the end.

Start by aiming for three sets of 30 seconds, with a 60-second rest between each go. Build up to five sets of one minute each, again making sure to take minute-long rests.

1 Unless you want to turn your planking into an extreme sport, find a solid surface. Lie on your front with your fists clasped, elbows pushed into your sides by your ribs, forearms on the floor and toes tucked under.

2 Push your bodyweight up so that it’s resting on your forearms and feet, in a straight line parallel to the floor.

3 Squeeze the muscles in your bottom and thighs and push your heels together (this increases the muscle tension in your legs and bottom), while pulling up on your pelvic floor.

4 Check your back and bottom aren’t popping up or caving in (tuck your pelvis under to switch on your lower abs) and that you are making a straight line from heels to head, so that your neck is parallel to the floor.

5 Relax your facial muscles. You could even try a smile (although only the floor should see that).

Related posts:
09/30/2018 Fitness Comments Off on How to do the perfect plank
Diets News