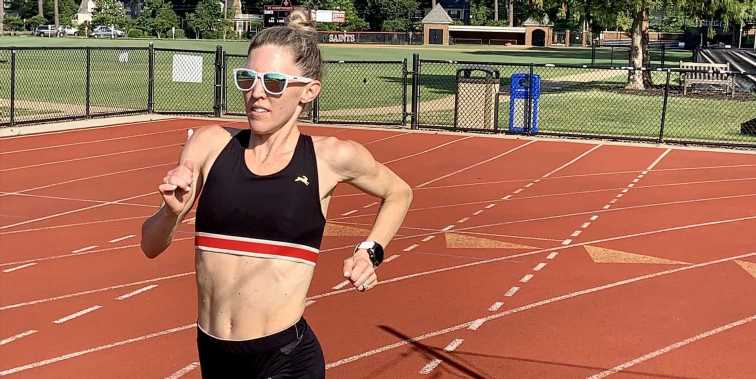 On Sunday, June 14 at 7 a.m., Keira D’Amato lined up on a high school track in Richmond, Virginia, to hammer out a 5K. About a week beforehand, the 35-year-old realtor had asked her training partner—Silas Frantz, a former college runner at Georgetown—if he’d be willing to pace her for the time trial.

“He told me he hadn’t worked out since we were marathon training for the [U.S. Olympic Marathon] Trials,” D’Amato told Runner’s World. “But he was up for pacing me.”

It was supposed to be a small event, with just D’Amato and her training partner on the track. But then the runner’s husband came out to watch, and he brought his friend, Brandon Miles, to film the race for MileStat. D’Amato was also surprised to see her coach, Scott Raczko, who is renowned for coaching American mile record-holder Alan Webb throughout his high school and professional careers.

“Having all of that support really motivated me,” she said. “I know I would have probably run the same time if it had just been me and my training partner, but it was awesome to share it with everyone.”

The time trial went even better than D’Amato could have hoped for. In her first 5K race on the track in years, she clocked 15:04, shaving more than a minute off the college 5K PR she set nearly 15 years ago. The runner finished her final 400 meters in a blistering 66 seconds, looking strong—and even smiling—all the way to the line. It wasn’t until later that she’d learn that her time was the seventh-fastest 5K time ever recorded by a woman aged 35 or older.

“I wasn’t really that shocked by my time, because I’ve been putting the pedal to the metal in my training,” D’Amato said. “But it didn’t hit me immediately that I had run under the Olympic standard.” For women, the 2020 Olympic standard for the 5,000 meters is 15:10.

D’Amato has competed at a high level since running for American University, where she was a four-time All-American and 11-time Patriot League individual champion. After graduating in 2006, she began training under Raczko in Richmond, Virginia, but was forced to take a break from running to undergo surgery on her ankle.

In her 30s, D’Amato began working toward achieving her unfinished business on the roads and track. She has been running between 100 and 130 miles per week to train for marathons the past few years, squeezing in the miles around her jam-packed schedule as a realtor and mom. She qualified for the 2020 U.S. Olympic Marathon Trials by running 2:34:55 at the 2019 Berlin Marathon.

And to all wondering—no, she isn’t sponsored; she has always purchased her own gear and paid her way for races. But she doesn’t mind. “I’d be open to a partnership, but I’ve had success on my own, and I don’t want to rock the boat,” she said.

After the Trials—she finished 15th in 2:34:24—she spent a few weeks doing low mileage, then brought her volume back up to between 60 and 100 miles per week this spring. In a typical month, she’ll run one week of 70 miles, one of 80, one of 90, and one of 100, then repeat the cycle. Perhaps even more impressive than her 5K time was the fact that she ran it at the end of a 100-mile week.

“Technically I only ran 95 miles that week, because after the race, my coach said I could take the rest of the day off,” she said. “My body doesn’t really need to taper.”

Her most recent 5K was not an out-of-nowhere feat, but the product of years of consistent hard training, she said.

“In the last two years, I’ve taken maybe one unexpected day off,” she said.

D’Amato’s original plan for this spring and summer was to try to qualify for and race in the 2020 U.S. Olympic Track Trials, but when those became postponed until next year, she and her coach mapped out a schedule of time trials for the summer. If racing resumes in the fall, she’ll consider doing a marathon then; but for now, she’s happy hammering on her own.

“It’s so powerful to set a goal for yourself and just go for it,” she said. “I think the key to having a good time trial is telling people about your goal, so it’s out there. Then work really hard to make it happen. It’s so fun to see yourself progressing.”