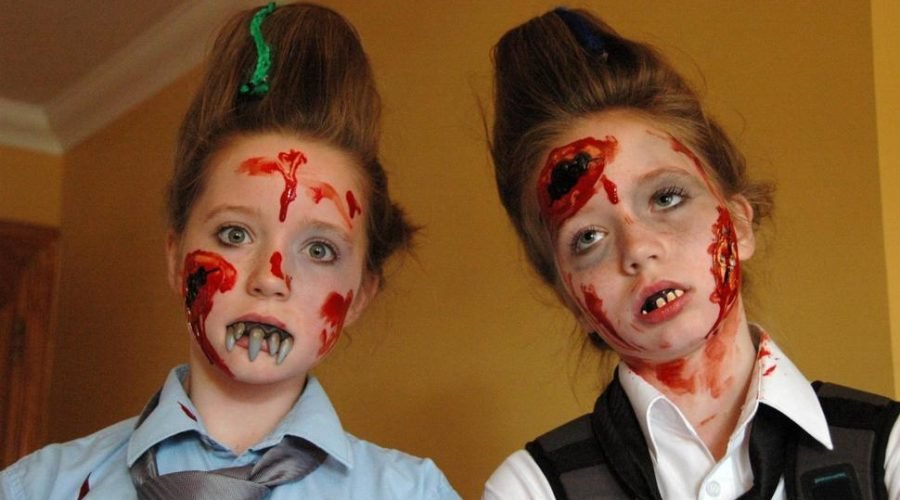 Instead of oversexualized store-bought Halloween costumes, brainstorm ways to get creative with dressing up and have fun with friends.(Getty Images)

Just when we thought that a Halloween costume for young women couldn’t get any more absurdly, offensively, inappropriately sexualized, the sexy “Handmaid’s Tale” costume came out. While the online retailer Yandy eventually pulled the costume amid backlash, the fact that it was ever sold at all emphasizes the point that, commercially at least, there is no restraint, no line that cannot be crossed.

Similarly this seems to also be true for young girls’ Halloween costumes. Even in attempting to be a policeman, a firefighter, an animal, a witch or some other nonsexual entity, many store-bought costumes have been made to look vampy by cinching in the waist, and making it low-cut and super short. Peer pressure and a desire to fit in can make girls as young as fourth and fifth grade feel they want to look “sexy” for Halloween.

It’s true that Halloween is a holiday made for the fun had in trying on a new identity. Trying on another identity is a normal developmental desire for children, particularly adolescents. This identity often has a wish in it, like “I wish I were as strong and powerful as a lion,” or ” I wish I was as attractive and attention-getting as this sexy French maid’s outfit.”

At the same time, however, there have been numerous studies which confirm that the oversexualization of girls increases their rate of depression and eating disorders. When a girl dresses in a sexy, revealing costume, even for the purpose of “joining her friends,” it sends a message to the world around her, and it may not be the message she wishes or is equipped to manage. She may find herself getting feedback that is unsettling, confusing and drives behaving in risky ways.

Is the Halloween costume a conversation worth having or even a battle worth waging? I would say yes, it definitely is.

Start now before she is already mowed over by a peer group and feels too much risk of being excluded. Ask her how she feels about the trend of every costume looking so similar and so revealing. Ask her why she feels the way she does. Discuss what her desired goal would be in looking sexual for Halloween. Share you own thoughts and concerns on the topic. Ask her to brainstorm with you about ways she can stay included, have fun and enjoy being dressed up without revealing so much. Hopefully to some degree this is part of an ongoing conversation about the way she wants to present herself to the world – what traits, characteristics and values matter to her and why.

Then move on to the nuts and bolts of what is going to be OK and what is not. Parents still have a say, but try to have some compromise, so that she, too, can take ownership of her decision on her costume.

If popularity and inclusion is what’s driving her, realize that peer pressure can push the envelope on more than a costume. Succumbing to it can lead to risky behavior like drinking alcohol and sex. When that coincides with a night where “permission” is being given to step out of your typical boundaries, it is important to think of what level of supervision needs to be in place to keep your children safe. Be willing to be the bad guy, and let her blame you or even use you as an excuse with her peers. It’s useful for your kids to have a code word determined with you beforehand that would signal they need to be picked up or removed from their current situation.

Remind kids that actually Halloween is a great time to showcase their creativity, artistic side, sense of humor and original thinking. Leaning on these attributes in making their costumes can leave them with a sense of fun and pride about the night, and show them that they don’t have to flaunt it, to flaunt it.

12 Questions You Should Ask Your Kids at Dinner

Dr. Gail Saltz is a clinical associate professor of psychiatry at the New York Presbyterian Hos…  Read moreDr. Gail Saltz is a clinical associate professor of psychiatry at the New York Presbyterian Hospital, Weill-Cornell Medical College and a psychoanalyst with the New York Psychoanalytic Institute. A frequent contributor in the media, she is a columnist, bestselling author, television commentator and a foremost national expert on a variety of psychological and mental health issues, especially those pertaining to stress and anxiety, emotional well-being and relationships.Dr. Saltz contributes regular mental health and parenting content to U.S. News and has appeared on Good Morning America, Dr. Oz, The View, Dateline, 20/20, Primetime, Today, CNN, CBS This Morning, HLN, MSNBC and in the Associated Press, Newsweek, O Magazine, Parade, Redbook, Woman’s World, New York Magazine, The New York Times, The New York Daily News, The Los Angeles Times, Health magazine and more. She is the chair of the 92nd Street Y 7 Days of Genius Advisory Committee and has served as a visiting professor at Stanford University. She also serves as a medical expert for Physicians for Human Rights.Dr. Saltz is the author of numerous critically acclaimed books including her most recent, “The Power of Different: The Link Between Disorder and Genius.” She has also written two children’s books, “Amazing You! Getting Smart About Your Private Parts” and “Changing You: A Guide to Body Changes and Sexuality.” She lives in New York City with her family and has a private practice in Manhattan. You can learn more at drgailsaltz.com and follow her on Twitter.