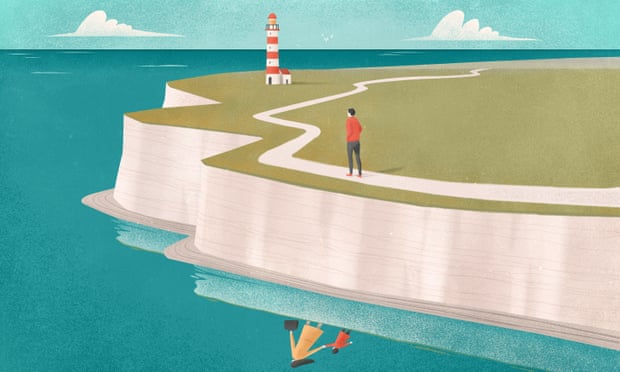 For years throughout the 1960s, my mum walked the North Downs twice daily. In the morning, she’d traipse from her home in the village of Hastingleigh across to her egg-packing job, just over three miles away in Wye. Then, once her shift was done, she’d haul herself back up Occupation Road and begin the long journey home. Rain or shine, all year round, that was her commute. A seven-mile round trip across the top of Kent to put eggs into a box.

These days, on Saturday mornings at least, you’re likely to find me on Occupation Road, too; trudging along in a fold-up cagoule, quietly cursing my choice of underwear and wondering what the hell I’ve done to myself. Later this year I’m participating in a 24-hour walk around the circumference of the Isle of Wight, and this just seems like the right place for me to train.

The walk is to remember my mum. I signed up for it last summer, on the same weekend that she died. A rash decision, sure, but it could have only been made then; right in the midst of mania that swirls around a recent death, when you dive deep into mindless busy work to distract you from the gaping hole that’s just been punched through your life.

That weekend was all about frantic organisation – funerals, finances, family – before the sheer blind savagery of loss had the chance to sneak up and knock us all sideways. I signed up for the walk because it was something to do, and then people started sponsoring me, and then it was too late to back out.

I chose to walk because that’s how I remember my mum. She was a walker. The egg factory years were far behind her by the time we came along, but by then striding everywhere with fury and purpose had become muscle memory, and the defining memory I have of my childhood involves run-walking several paces behind her down the main road every week on the way back from the shops. She made no concession for dawdlers. My dad worked abroad at that point, so everything was on her. If she didn’t do things, they didn’t get done. She’d have dozens of carrier bag handles digging into her wrists, but she refused to let them – or us – slow her down. My mum, the 5ft-nothing terminator.

So this is what I do. I wake up early, I pull on my boots and off I set. Out of my house, up a hill, through the woods, over a bridge and on my way. I’ve made friends with public footpaths, with the grinding monotony of stile and field. I’ve misread maps and got lost, snagging my leg on barbed wire fences and rebirthing myself through tightly brambled knots to get back on track. I’ve been pelted with rain and lost all feeling in my fingers. I’ve seen my muttered curses leave my body in clouds of breath. My feet, without question, are an unrecognisable mess. They’re swollen and purple and missing some skin. All baths, to some extent, now feel like they’re made of boiling vinegar. But I keep walking.

And not just the distant stuff either. I often pass close to the spot where – just a few years ago, back when Mum was ill – Dad got lost in a nostalgic reverie during a drive, hit a pothole and knackered two of his tyres. And, I don’t want to get too graphic here, but I’m pretty sure that at one point I get within 100ft of where one of my kids was conceived.

Despite my younger brother’s repeated recruitment campaigns, I have never enjoyed running. Not really. Set me off at speed and, before long, every stride simply becomes another opportunity to back out. I’ve run for years on and off, but I’ve never counted myself as a runner. If you pushed me on the subject, I’d tell you that I was a committed eater who only ran to offset the biscuits.

But walking is something brand new for me; it’s an exercise I actually like. Between walks, I find myself inexplicably looking forward to the next one. The browser tabs on my phone are full of GPX routes and tutorials for taping up your feet. This is unprecedented. I always thought my hobby would be more sedentary. I thought it might just be sleeping. I don’t even know who I am any more.

But walking suits me. It’s a pursuit that rewards persistence over ability, the methodical grinding down of obstacles over the showy exploding of them. Hood up, head down, keep going. The rhythm is much slower, but it’s still there. You find a spot in the distance and you point yourself at it. Much later, once you’ve managed to reach it, you find another spot in the distance and point yourself at that. Repeat those steps enough times and, eventually, you’ll get to where you want to be. It’s a process, and the only way to succeed is to wholly give yourself over to it. Trust in the route. Trust in the plod. The result you want won’t happen suddenly – it takes six hours to walk to Canterbury, and nine to Dover, and it’ll take a day and a night to get around the Isle of Wight – but it will come.

Of course, the big advantage of walking is that, when you do feel like giving up – like the time it rained so hard that my phone conked out, leaving me frozen and mapless in a nowhere place that some nefarious fool had decided to name Stump Shave – you’re too remote to simply hop on a bus home. You walk yourself into these messes and the only solution, every single time, is to walk yourself back out.

Walking offers a space I haven’t found before. When I run, my brain is crowded out with all sorts of thoughts, like “I hate this” and “Ouch”. But walking is so slow and solitary and contemplative that it offers me a chance to work things through. I can think about where I am, and what I want. I can think about my mum, and all that she meant to me. Every footfall is a tiny jolt that gradually knocks everything displaced back to where it should be. Persistence over ability. The result won’t be sudden, but it will come.

I didn’t deal with my mum’s death well, for all sorts of reasons. Between the necessity of work and the demands of my young family, there were so many small fires to constantly put out that I couldn’t properly absorb the enormity of what had happened. As a result I fell into a crotchety funk that lasted for several months. I became listless and irritable, worn down by the litany of tiny responsibilities that make up my life. It’s a miracle, frankly, that anyone stuck with me. But walking has proven to be a snowball to the face. “Purpose” is much too strong a word here – I’m tramping across fields, not ending poverty – but it’s helping to blow the cobwebs out. Little by little, I’m starting to feel like myself again.

I feel weird telling you this, but in Mum’s final hours – after the doctor had told us to say our goodbyes – I prised a rubber cable tidy off the hospital bed that was set up in her dining room and started mindlessly thumbing it, turning it over and over in my hand as I sat next to her. When she died, I slipped it into my pocket and it’s stayed there ever since. To this day, whenever I change trousers, I take it out of the old pair and slip it into the new. The cable tidy means nothing. It’s a meaningless trinket that I bought online for pennies because she was frustrated about losing her iPad charging cable. But in the ensuing months it became more than that. It’s loaded with significance. It feels like I’m carrying a piece of her around with me. For a while, the thought of losing it terrified me.

But the more I walk, the less I need it. Being outside, seeing where she grew up, walking in her footsteps, breathing the same air; it’s slowly giving me a new perspective about things. She’ll always be part of me – of course she will, she’s my mum – but by walking out my grief one step at a time and trusting the process, I’m starting to learn that it’s OK to let go.

Mum was a walker, and now I’m a walker, too. That’s all the connection I need.

Related posts:
10/02/2018 Fitness Comments Off on ‘Walking out my grief one step at a time’: why I’m doing a 24-hour walk | Stuart Heritage
Diets News