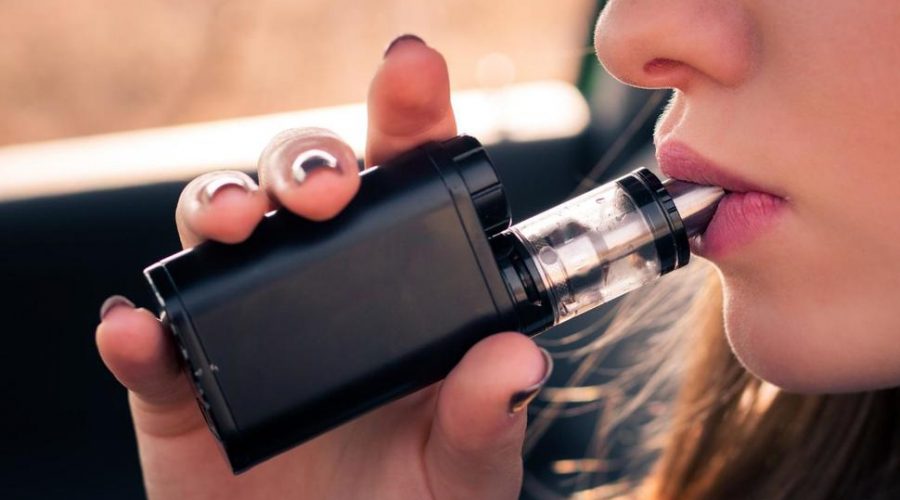 While e-cigarettes contain less toxins than other cigarette types, findings from a Pediatrics study found vaping still leads to an intake of numerous carcinogenic compounds.(Getty Images)

As a parent of a teen today, it would be hard to miss the growing public health concern surrounding the use of e-cigarettes by adolescents.

How to Tell if Your Kid Is Vaping

In a lengthy, forceful statement in September, U.S. Food and Drug Administration Commissioner Scott Gottlieb sounded the alarm about what he described as “an epidemic of e-cigarette use among teenagers.” According to the Centers for Disease Control and Prevention, 12 of every 100 high schoolers surveyed in 2017 reported they’d vaped in the past month, compared with less than 2 in 100 (1.5 percent) who reported the same in 2011. So in a departure from the FDA’s previous approach, which prioritized making e-cigarettes readily available to adults seeking to use them to help quit smoking, the agency plans to step up policing of the battery-operated devices that deliver an aerosol most often containing nicotine (though it’s not in all products), as well as other harmful chemicals. Notably, e-cigarettes came to market unregulated, and scientists and health experts have been scrambling to understand the risks associated with the wide-ranging products.

The picture can be hazy for parents trying to protect their kids, too. For one thing, all the back-and-forth debate regarding e-cigarettes’ potential usefulness as a quit aid for adults who smoke traditional cigarettes can distract from the risks vaping poses to kids who have never smoked at all, experts say. But increasingly research has revealed toxins in e-cigarettes and how vaping increases the likelihood a teen will go on to smoke cigarettes later.

Taking it all in, experts say there are steps parents can take to prevent kids and adolescents from using e-cigarettes – and help them stop if they are vaping.

It’s not just parents, but teens who wonder about the dangers of e-cigarettes.

Dr. Mark Rubinstein, an adolescent medicine specialist at UCSF Benioff Children’s Hospital in San Francisco, has fielded questions on the risks of vaping from patients – and found himself lacking answers. “I always believe in being honest with my patients, because I think scare tactics and misinformation can often have the opposite effect on teens. So I just told them, we just don’t know,” he says. “These products have not been tested for safety.”

The dearth of e-cigarette safety data has led some, like Rubinstein, who is also a professor of pediatrics at the University of California—San Francisco, to take matters into their own hands, and test the products. Rubinstein led research evaluating toxic chemicals in e-cigarettes published earlier this year in the journal Pediatrics.

Although e-cigarettes are generally considered safer than cigarettes given they typically have lower levels of toxins, health experts say that’s hardly a measure of safety. Based on findings in the Pediatrics study, e-cigarette users are vaping a number cancer-causing, or carcinogenic, volatile organic compounds, including propylene oxide, acrylamide, acrylonitrile and crotonaldehyde. “With few exceptions, these toxicants were present whether the product contained nicotine or flavorings,” Rubinstein and his fellow researchers noted.

Most e-cigarettes do contain nicotine, which is not only highly addictive but can hurt adolescents in other ways. “Nicotine has particularly harmful effects for developing brains. It’s associated with cognitive problems and poor impulse control,” says Meghan Morean, an assistant professor of psychology at Oberlin College & Conservatory in Ohio. “It’s a much more dangerous compound for kids than it is for adults.”

In her own research, she’s also found that high school students sometimes use e-cigarette devices to discreetly vape marijuana. “You can conceal it,” she says. “When you vape pot, it doesn’t smell anywhere near as strong as when you smoke it.” There’s also the worry that in some cases kids might think they’re “just” trying an e-cigarette, not knowing it has pot in it. “If you’re literally not sniffing the tip of the device, if it’s already been used, you’re not going to ever know that that’s what’s inside of it,” Morean says.

Familiarize Yourself With the Products

Experts say it’s a good idea for parents to be generally familiar with the different types of e-cigarettes to better understand and convey the risks to kids – and so that parents are more aware of the hazards.

Whether it’s a pod device – like the JUUL or the PHIX or the Suorin; whether it’s a refillable pod; or whether it is something that’s refilled with a dropper from a bottle from a vape shop – “the chemical components that are in there are heated to a high degree, and then you’re inhaling a complex aerosol into your lungs,” says Dr. Susanne Tanski, a tobacco prevention expert with the American Academy of Pediatrics, and associate director of the C. Everett Koop Institute at Dartmouth, which seeks to mitigate threats posed by, among other things, consumer products like tobacco. And though much remains unknown about the short- and long-term impact, research indicates vaping increases inflammation and can harm lung tissue.

Another way to keep up with various vaping products: Keep an eye out for those the FDA is homing in on. Five e-cigarette manufacturers “represent more than 97 percent of the current market for e-cigs — JUUL, Vuse, MarkTen, blu e-cigs and Logic,” Gottlieb noted last month. “These brands will be the initial focus of our attention when it comes to protecting kids.”

Detecting e-cigarette use can be difficult. While some products send off a large, obvious plume, many aren’t so conspicuous.

JUUL, PHIX and Suorin are three of many pod devices that have so-called low vapor, or give off only a small plume when used. “Kids are really good at hiding that. I’ve had kids in my practice who say, ‘Oh yeah, I just blow it into my hoodie’; ‘I blew it into my sleeve,'” Tanski says. “So they can be quite discreet, and they can use it in school” – though they’re not supposed to, without being detected.

To further complicate matters, the devices are easy to overlook. “There are some that look like cigarettes, but most of the kids are not using those,” Tanski says. Instead they’re typically using smaller devices that can easily be concealed or that look like something else: namely, a USB memory stick. Kids could have a JUUL sitting next to their computer, and the parent not be aware that’s actually a vaping device, Tanski says. For that reason, it’s important parents not only know product names, but what they look like.

But before you go into full sleuth mode, experts say it’s important to begin an open and honest dialogue with kids about e-cigarettes, the potential dangers and why it’s important they not use them. If you need an assist, the teen’s doctor is a great option – and it’s a good idea to let them speak confidentially with the pediatrician or adolescent medicine specialist, so that they can get expert input on risky behaviors, like vaping.

Nicotine in e-cigarettes can be highly addictive, and the science of quitting vaping hasn’t yet caught up to the sharp rise in youth use of e-cigs. Still, most kids should be able to quit cold turkey, Tanski says. But it’s critical they get parental support, and it would help if they have peer support, too (i.e. if a group of friends who’ve vaped, makes the decision to stop together).

Extra help is available by calling a free quitline, a telephone-based tobacco cessation service. If you don’t have a local number, you can start with the national quitline number 1-800-QUIT-NOW (800-784-8669), which is operated by the National Cancer Institute, to be routed to a local quitline. “Most of the quitlines will talk to teenager,” Tanski says.

It’s not clear how yet nicotine replacement therapy – like the patch or a lozenge – might help a person who’s been heavily using e-cigarettes for a long period of time, perhaps years, who can’t quit cold turkey. And a teen under 18 would need a prescription for it. “If I have an adolescent who is saying they’re really dependent – they’re vaping multiple pods per day – this has not yet happened – I would have conversation with them about whether medicinal nicotine replacement therapy would be of benefit or not,” Tanski says.

Bottom line, clinicians say, is to support kids in stopping vaping – now – before harms accumulate or a child moves on to traditional cigarettes and is exposed to even more serious, well-known dangers.

12 Questions You Should Ask Your Kids at Dinner