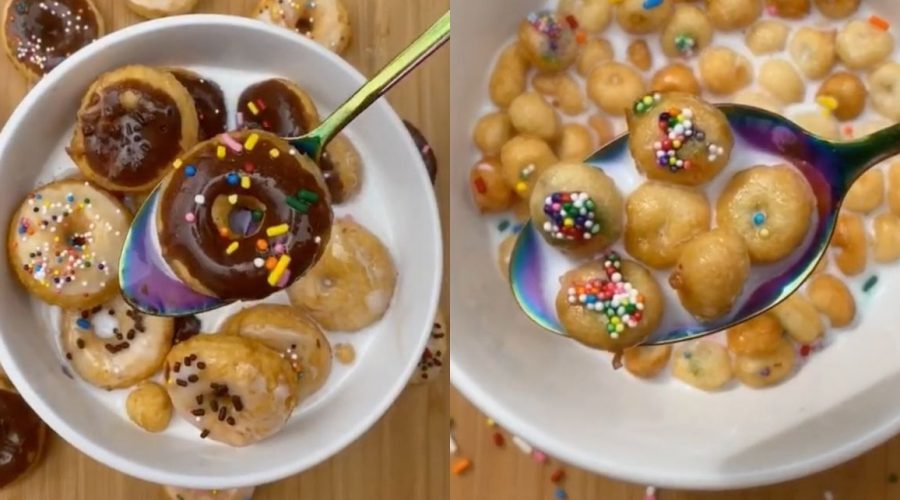 Thanks to TikTok, extra time on our hands, and our collective love of making tiny foods, the internet has obsessed over cereal made of breakfast foods. First, there was pancake cereal, then there was waffle cereal, and, finally, there was cookie cereal (even though that’s just Cookie Crisp, people!). It was only a matter of time before we dived into doughnut cereal, so add it to your running list of TikTok trends you need to tackle!

The TikTok account @SoFloFooodie shared not one but two versions of doughnut cereal that you’ll want to make immediately. In the first version, the creators behind the account made a variety of mini doughnuts with chocolate and vanilla glazes. They topped the mini doughnuts with rainbow and chocolate sprinkles and then plopped them all in a bowl and added milk. The genius part of this one is that they used the little doughnut holes in the cereal too.

If you think that cereal is cute, just wait until you lay eyes on their second video that features super-tiny doughnuts. They essentially follow the same process, but they used only vanilla glaze for this one. Since the doughnut holes are way too small to add in, they added giant sprinkles into the bowl on top of the already sprinkle-covered tiny doughnuts. Of course, they added milk for the finishing touch.

I truly don’t know what breakfast food will receive the cereal treatment next. French toast? Cinnamon rolls? Would mini muffin cereal be totally chaotic? Only time will tell!

Related posts:
05/19/2020 Diet & Food Comments Off on Pancake Cereal Is a Thing of the Past Because People on TikTok Are Making Doughnut Cereal Now
Diets News