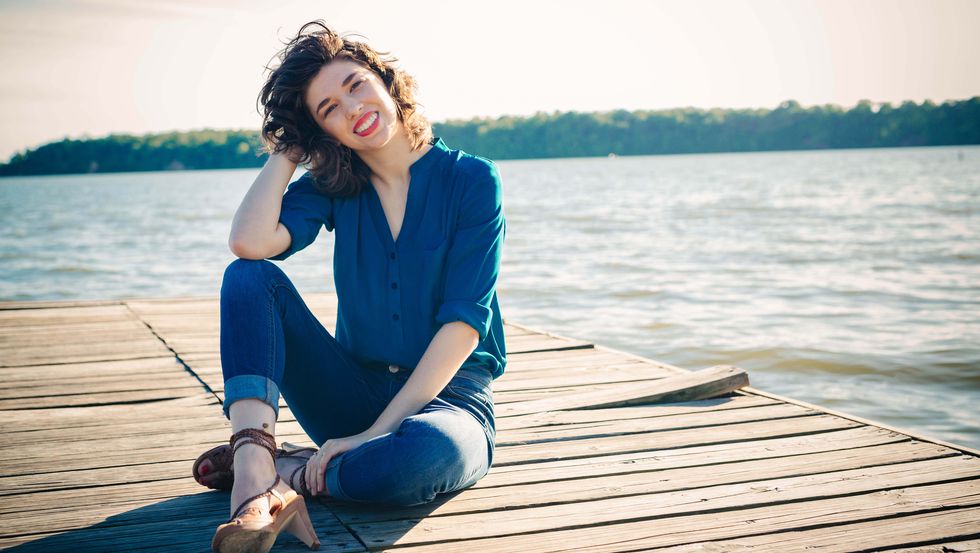 I was 11 or 12 when my hormones kicked in and I got my first breakout. It was the first of many. My mom gave me cleaners, creams, treatments, and toners that helped clear my skin some, and at the time, I was just thankful to look in the mirror and not see myself covered in pimples.

As I got older, I was eager to find a way to stave off breakouts naturally (I wasn’t too into the idea of slathering chemicals on my face), but the natural skincare products had never worked for me. So I assumed I’d always have to choose between using chemicals on my skin or having a face full of acne.

‘I LEARNED CHANGING MY DIET MIGHT CHANGE MY SKIN.’

Then last year, while working on starting a beauty and wellness blog (B.Well) with my sister, I read up on several other blogs about holistic health. I read stories from lots of women who found that eliminating dairy or sugar (or both!) one or both of these foods helped clear up their skin in weeks. (And there is some evidence to suggest that some dairy and high-glycemic foods can make acne worse in people who are prone to it.)

I tried both of these things, but didn’t see much improvement in my skin. I then decided to try cutting out gluten, since anecdotal evidence suggests gluten intolerance can cause skin problems as well as digestive problems (although admittedly, there aren’t any studies to back this up). But I was willing to try anything to find clearer skin without having to use lots of chemicals on my face.

‘I FOUND A WAY TO KEEP EATING BREAD.’

Giving up gluten was daunting, though—bread is my favourite food, and it was a staple in all of my go-to meals. That’s when I discovered einkorn, an ancient grain that is essentially a less genetically modified ancestor of wheat. It’s not entirely gluten-free, but it has much less of it—making it easier to digest if you have a sensitivity. I figured this could be a great place to start that didn’t force me to give up bread.

The one downside: I had to bake the einkorn bread myself (it’s not exactly easy to find). I ordered a bag of the flour from Amazon Prime and baked a batch of sourdough bread. It was so flavourful, dense, and delicious. I felt good about filling my body with unprocessed fuel, and I hoped my skin would reflect that.

When I cut out “modern” gluten, my diet radically changed:

As for desserts, I learned to make microwave mud-cakes and other baked goods using einkorn. I found that almost any recipe that called for wheat could be substituted with einkorn, and it would taste just as great. I bought a cookbook, Einkorn: Recipes for Nature’s Original Wheat, and started making my own pastas, rolls, muffins, and even pizza, too.

‘MY SKIN HAS NEVER BEEN CLEARER.’

Years of dealing with acne made me hyperaware of every single breakout. But within about six weeks of replacing modern gluten with einkorn, my skin was clearer than ever before. I felt more confident every day, and it inspired me to stay on top of my new diet.

Of course, I’ve had, and will continue to have, some slip-ups. If a good friend wants to grab a slice of pizza every once in awhile, I let myself indulge a little bit. When that happens, I tend to see a new breakout within a week, but to me, that’s a small price to pay for the memories made around food.

Since I switched to einkorn last year, my skin has continued to improve day after day. Even though I still have some occasional breakouts, I feel so much better now that I don’t have to use chemical acne products, and I’m proud of the way I’ve treated my skin from the inside out. My acne is no longer holding me back from putting myself out there, and my days of stressing out over every new bump are behind me.

Related posts:
07/27/2018 Diet & Food Comments Off on 'I Stopped Eating Wheat – And It Transformed My Skin'
Diets News