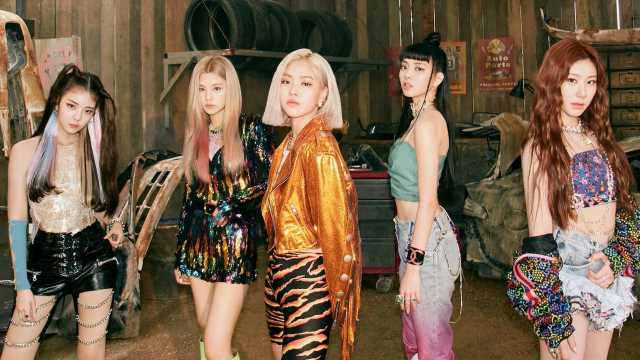 Interviews with K-pop group ITZY kind of feel like a big slumber party. The cozy, late night-yet-giddy vibes may be due to the fact that it's 7:30 p.m. on a Monday night in New York City, but also all six of us are as comfy as ever without makeup on and dressed in sweats. Or these may just be the affable energy Yeji, Lia, Ryujin, Chaeryeong, and Yuna bring to the literal table as they sit in a conference room in Seoul, South Korea — there, it's Tuesday at 9:30 a.m. — ready to chat all things beauty and ITZY.

Since debuting in February 2019 under the same entertainment company that brought us TWICE, GOT7, DAY6, and Stray Kids, ITZY has won over fans in Korea and beyond with their incredibly catchy music, which is 1,000 percent the kind I would have blasted when I was younger during dance party sleepovers in my basement. (I fondly remember creating choreography to Aaron Carter's "That's How I Beat Shaq" once upon a time.)

But as an adult, I still thoroughly appreciate the adages of self-confidence that ring throughout ITZY's discography, like "I don't wanna be somebody. Just wanna be me" in "WANNABE" and "They keep talkin', I keep walkin'" in "ICY". Their popularity has spread globally so quickly that ITZY just dropped English versions of all their singles with their new album, Not Shy (English Ver.).

With each of their music videos, ITZY brings brighter and more experimental hair and makeup looks. Their unique style reflects exactly who ITZY is, the group's youngest member, Yuna, says. "A big part of performance is, of course, the dancing and facial expressions, but the styling is also a very big part because it gives the vibe of the song," Lia adds in English. The 20-year-old main vocalist grew up in Toronto, Canada, and acts as a secondary translator for the group.

I ask the girls to break down their favorite looks from each music video, as well as how they keep their skin glowing. But before that, ITZY's leader, Yeji, also 20, points out a specific detail of their makeup that I never noticed: "Our eyeliner is usually [drawn] above our [lash line]," she shares. "That point shows a little bit of charisma and the overall power of ITZY."

In Korean, 달라(dalla) means different, and the hair and makeup in the group’s debut music video are just that, Yuna, 17, explains. With creative, arrow-like bobby pin placements, chunky glitter eye shadow, braided space buns, and washes of bright shadow, the girls proved nothing is subtle about their style. It's edgy, effervescent, and unapologetically prismatic.

"달라달라(DALLA DALLA)" also established some of the members' signature looks. You can catch Lia's hair pulled up into her sleek, high ponytail for the first time, as well as Ryujin, 19, with the first colorful dye job of her K-pop career: a sometimes tangerine, other times watermelon-pink underlayer.

Debuting also introduced the girls to the wonders of skin care. Prior, Yeji says she wasn't interested in it at all. All she would slather on was lotion. "After debut, I had to put on makeup all the time, so I knew taking care of skin was very important," she adds before listing off her current routine: toner, essence, cream, eye cream, lip mask. (Yeji is very serious about her lip products.) 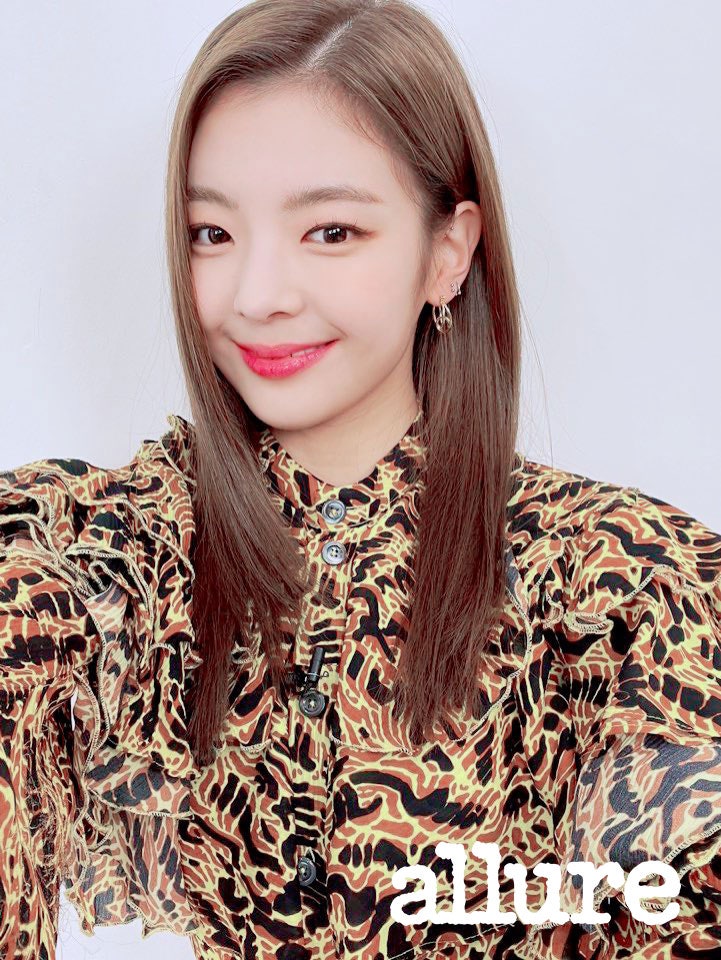 For Lia, she got super into skin care at first because her skin is sensitive to all the makeup she has to wear on stage. "It's really hard for me to keep my skin in good condition, but it’s really good when I'm not working," she remarks.

At first, Lia dove into a classic 10-step skin-care routine to remedy her complexion concerns. "I was searching lots of stuff and trying new things," she says. "Only a few of them actually helped, so I only do the things that are really important now, like cleansing and moisturizing."

Five months after their debut, ITZY kept the momentum up as they took over Los Angeles in the music video for their second single, "ICY." The beauty moments were revved up a notch with glitzier eye makeup and higher octane berry-toned lip stains. "We tried to put on lots of bright eye shadows and eyeliner because it was summer and the song was really bright and energetic," Lia says. Yeji also mentions her sassy pigtails for "ICY," noting "I'm very open to every hairstyle."

A couple of the members even showed off new hair colors. Yuna bleached her hair blonde for the season while Ryujin went fully pink with a frosty bubblegum hue. "I really love to dye my hair different colors because it's a good way to change your mood, and it matches with the title songs," she shares. This look, in particular, fit the "cold-but-summery" aesthetic, Ryujin adds.

Before debuting, Ryujin never had the opportunity to dye her hair. Now that she has dozens of times, her hair can be "very… not good," she admits — in English — while laughing. To help keep it healthy, she douses her hair with oil before heat-styling.

Just when everyone started to stay inside due to the pandemic, Ryujin had everyone in their mirrors at home practicing her beloved shoulder dance from "WANNABE." ITZY went darker and "chicer" with their first single of 2020, the group's main dancer, Chaeryeong, says. However, when ITZY goes dark, it's not all black leather and lace as most K-pop groups do. In ITZY's world, color is never optional.

With its sharp-yet-smoky eye makeup and razor-sharp winged liner, "WANNABE" seems to be the ultimate favorite music video for all of the members, in terms of beauty moments. Chaeryeong, in particular, says she thought her wavy auburn high ponytail and dreamy monochromatic coral makeup "suited my face and personal style well." 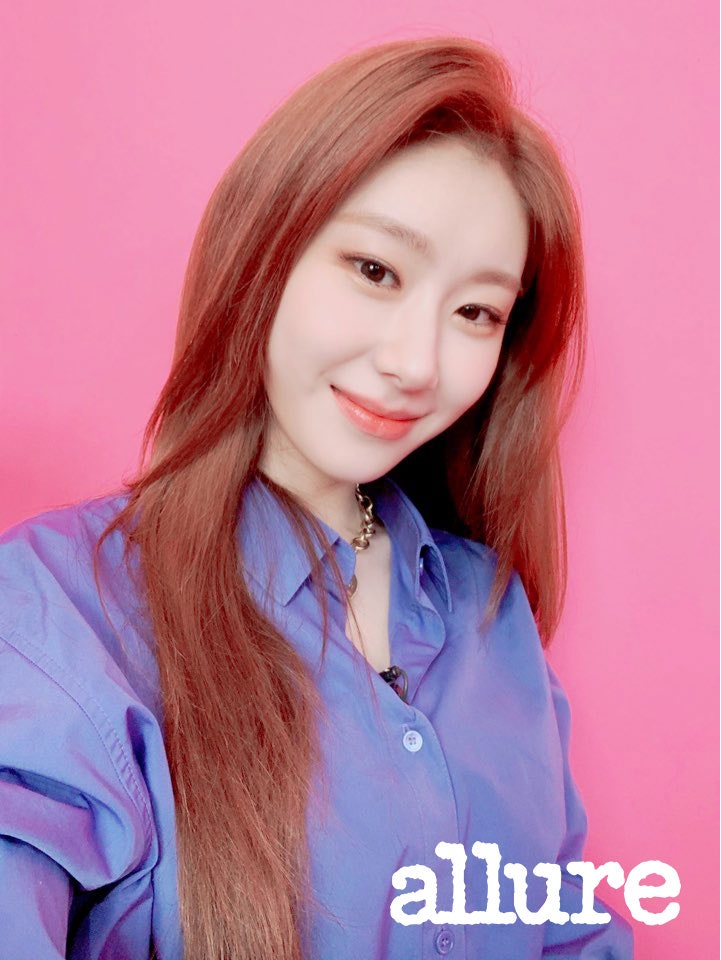 Ryujin, on the other hand, switched up her color once again with sharp midnight blue hair that she cuts into a bob during one scene. Yuna went back to a chocolate brown. "I prefer dark-tone hair," she says. Underneath her eyes, she also mentions she had "point makeup," aka glitter, along her lower lash lines.

When ITZY started performing "WANNABE" on stage, the members switched up their hair once again. Lia ended up cutting her hair "short" for the first time. (Short is put in quotations because Lia considers when her hair falls just past her collarbones as such.) "That was really exciting for me because I've had long hair since," she pauses to think before adding, "my whole life." Lia also loved her sparkly makeup and rhinestone hairpins, including, but not limited to, accessories that said "BORED" on them, for this comeback — and I'd have to agree. 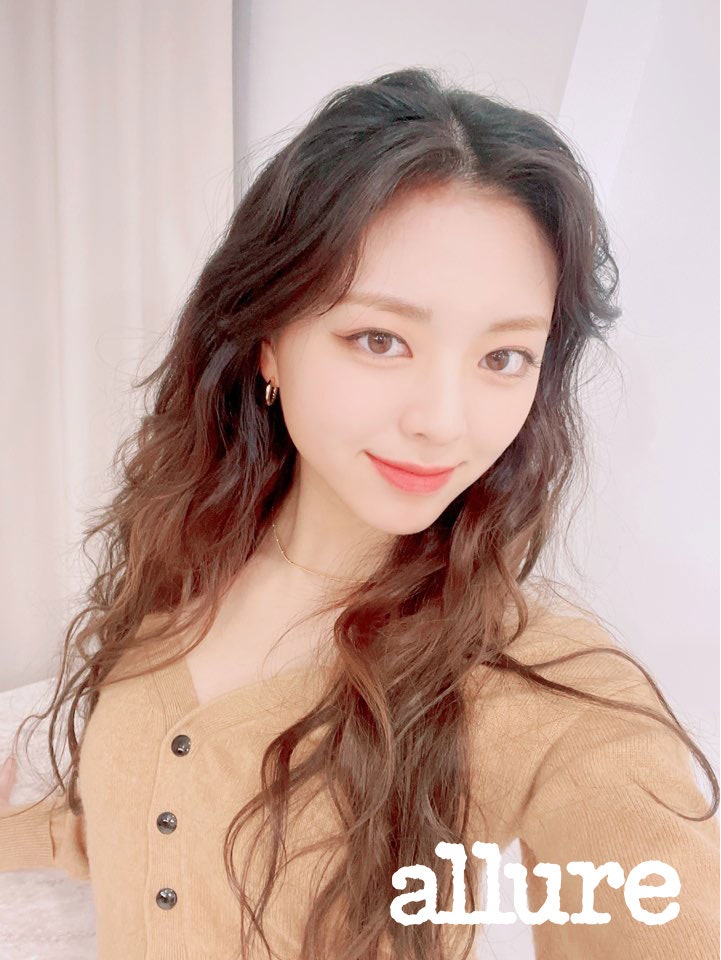 Yuna got to finally try out bangs, just as she'd always hoped. Her new blunt fringe grazed her eyebrows. "I really liked the style," she says. "It made me feel like an adult, and I love that vibe."

As for Yeji, she surprised fans — and herself — by going ashy blonde. "It was very challenging but really fun," she says.

In August 2020, ITZY dropped another album with "Not Shy" as the lead single. Some way, somehow, the group's hair and makeup were bolder and charismatic than ever before, Lia says. Funky was the keyword for Ryujin for describing their looks. Fun fact: Makeup artist Gunhee, who works with Sunmi and Somi, worked with ITZY during this era.

Gunhee reached for hot pink eye shadow for several of the members. Graphic liner also came into play on Chaeryeong and Yuna. Mirror-like glitter adorned lids, too, while tinsel streaked the girls' hair for fun reflective effects throughout the music video. Lia even had blue stars painted on the corners of her eyes, which inspired dozens of beauty tutorials.

"Not Shy" also kicked off Ryujin's love of blush. Gunhee swept a dramatic pink flush on her, and lately, Ryujin has been into doing her own makeup while bored at home. "It makes me look… shy," she explains ironically with a pause. Her favorite shades to play around with are orange-brown and orange-pink. (If you need some suggestions to try out on yourself, the Maybelline New York Cheek Heat Gel-Cream Blush in Nude Burn and the Peripera Pure Blushed Sunshine Cheek in Hazel Orange or Milk Tea Coral are great picks.)

For hair, Yuna's bangs were trimmed shorter for a more Bettie Page style, which came as a relief because her longer bangs caused some issues. During ITZY's high-energy performances, the blunt hairs along Yuna's forehead kept flying out of place. In our interview, she even acts out their unruliness. "It's really hard to keep my bangs straight," she adds.

Yeji kept her hair blonde, but streaks of blue and pink were added to the ends. (The same cotton candy colors were added to Lia's asymmetrical, Zenon: Girl of the 21st Century-esque pigtails via extensions.) The rainbow dye job reminded her of a time she attemped hair color before debuting. She tried to bleach her ends blonde, but they ended up red, creating a low-key two-toned look.

Although the girls of ITZY have tried out so many vibrant, adventurous looks, they still have some other beauty moments they'd like to have. Although she usually likes dark, natural hair colors, Chaeryeong wants to dye her hair wine red. "Many MIDZY want me to change my hair to a different  [color]," she shares in English, referring to the group's official fandom name. Yeji, on the other hand, plans to keep being experimental with her hair.

Yuna has a complete beauty fantasy in mind: "I love eyelashes," she shares full of excitement. "When I have a chance, I want to try long, full, strong eyelashes, and long, straight black hair." What about the rest of her makeup? "Not too much — just chic," Yuna remarks confidently in English.

MIDZY may remember Ryujin's Halloween 2020 outfit. She dressed as her interpretation of the wife of Chucky, complete with black lipstick. "It was really funny that it fit me," she laughs. With that in mind, she hopes to experiment with other darker lip colors.

For now, ITZY is focusing on their skin, though. Cleansing with a device like the Foreo Luna Mini 3 has been Chaeryeon's secret to avoiding maskne. "These days, there's not much we can actually do because we always stay at home and practice and repeat," Lia says. "Since it's winter and it's getting really cold and dry, we're moisturizing at home." Before bed, she layers on an overnight mask, such as the Youth to the People Superberry Hydrate + Glow Dream Mask, and goes to sleep. "I'm a little too lazy to put sheet masks on and take them off," she adds.

Before our interview comes to an end, I mention this year marks Allure's 30th anniversary and ask ITZY where they see themselves at 30 years old. Lia quickly chimes in. "I always imagine myself being an adult, like 30 or actually 50," she says. "At 30, I always imagine meeting with my members, having a cup of tea or Korean barbecue, talking about our times when we were 20. It would be really touching and fun — and weird. I really want to turn old and talk about the previous days with our members."

Related posts:
01/28/2021 Beauty & Balance Comments Off on ITZY Walked Us Through All of Their Best Beauty Moments
Diets News