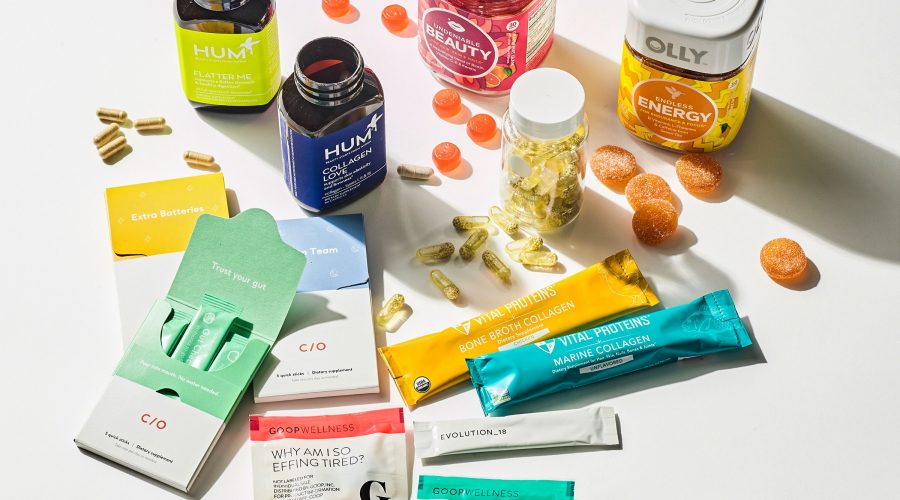 “Sexy” and “supplements.” Two words that rarely frolic in the same sentence. And why would they? In their sad beige bottles, vitamins were banished to the musty corners of health stores. Shopping for them was the opposite of sexy: a joyless — and confusing — experience (wait, what is L-theanine again?). Those frequenting the fitness aisle could practically file misdemeanor claims — assaulted by screaming labels (SUPER MEGA) and a blizzard of acronyms (MSM, BCAA, 5-HTP).

A new breed of vitamins, however, is fluent in a more emotional language — and its favorite expression is beauty, from elixirs promising healthier hair to pills that claim to unlock glowy skin through probiotics. So far, it’s proven lucrative. Global beauty-supplement sales are set to reach $6.8 billion by the end of 2024 (nearly double what they were in 2016), says a report by Goldstein Research, a market research firm. All while traditional vitamin giants are floundering. GNC is closing 200 stores, and sales at the Vitamin Shoppe, with its creaky Ye Olde spelling, have been declining for years.

Sprung from the loins of the virile wellness industry, these next-gen pills and powders bear the seductive trappings of self-care. They don’t want to fix you — oh, heavens no. They want to inspire you to be a better you. It’s aspiration in a fetching package. (Operative word: “package.”) In fact, the bottles are so sleek it’s not immediately clear what they are. A Parisian tea blend? Facial oils from an Amalfi Coast boutique hotel? The gleaming amber bottle that holds The Nue Co.’s Prebiotic + Probiotic resembles an expensive candle; the glossy black decanter of WelleCo.’s The Super Elixir looks like a flacon of perfume. The names themselves can also turn on the charm. See: Hum, a top seller in Sephora’s growing nutrition section, which offers a digestive-focused formula, Flatter Me, and skin-and-hair supplements called Red Carpet.

Early arrivals on this scene included Gwyneth Paltrow’s Goop supplements (like Why Am I So Effing Tired?) and the Kardashian-beloved-and-shilled-for SugarBearHair gummy vitamins. They proved that there is a captive audience to be had on Instagram — if you design products that beg to be shared. But it goes beyond the superficial, some experts say. Consumers want their voices heard, and these companies are listening. For instance, Care/of personalizes its vitamins and addresses its customers by name on its packages. “The design and storytelling around supplements is much more approachable today,” says Kelsey Groome, managing director for Traub, a business-development firm that tracks the wellness industry. “It’s all about inclusivity and community.”

Your vitamin routine should reflect who you are — but also who you want to be, says Eric Ryan, cofounder of Olly vitamins. He and his team designed bright, happy packaging (with a smiley face on the “O”) so that people would want to display his vitamins on their desk at work, rather than furtively stash them in a drawer. “We created something that was full of optimism,” he says, “because ultimately, that’s why you’re taking these products — to feel better about yourself.”

“The design and storytelling around supplements is much more approachable today.”

Earnest, yes. But research suggests it’s not just unicorns and rainbows. Multiple studies over the years have shown that women who have a vitamin regimen tend to take better care of themselves overall — eating better, smoking less, even working out more. And clever names and rainbow packaging (we didn’t say there are no rainbows) “make these supplements appear more attractive, which helps with compliance,” says Wendy Roberts, a dermatologist near Palm Springs, California.

It also helps if you can size up a vitamin label and not feel like a half-wit. That was part of the reason why makeup artist Bobbi Brown launched her own wellness line, Evolution_18, this past spring. “I’ve always been a health nut,” says Brown, who recently did 40 weeks of training to receive her certification as a health coach. “And I truly believe that so much of beauty is how healthy you are. I buy a lot of these things, and then I have them in my cabinet, and I get so overwhelmed and don’t know what they’re for. So I looked at this line, thinking, How do I simplify things for women?”

Brown’s confusion, many marketers say, echoes one of the top consumer complaints about vitamins. Olly cofounder Ryan’s fix was to tout supplements’ benefits rather than listing endless ingredients — instead of melatonin, Olly sells Restful Sleep. “This is the aisle in the drugstore where people do not feel very smart,” Ryan says, “so we simply focused on what the product does.”

But the brands, mindful of millennial customers’ insistence on transparency, are also careful to list ingredients. Care/of, which features a category called “honesty” on its site, discloses that milk thistle has “mixed research,” while the evidence on its probiotic blend is “emerging.” Ritual (company slogan: “By skeptics, for skeptics”) lists ingredient sources and manufacturers, and its signature capsules are symbolically clear.

Ritual’s female fans have little to hide, too, and that drives social engagement. “It’s about sharing regimens — like how your friend group is all drinking Dirty Lemon,” Groome says. “Younger people in particular share health information on social media. They get it from friends and micro-influencers they trust.”

“This is the aisle in the drugstore where people do not feel very smart.”

OK, so friends? (Check.) Micro-influencers? (Check.) Doctors? (Crickets.) Doctors? Are you there? Most often, no. Which is certainly alarming. “When a patient of mine decides to start or stop a supplement, I treat it as critically as starting or stopping a medication,” says Alka Gupta, an internist and codirector of the Integrative Health and Wellbeing program at Weill Cornell Medicine and NewYork-Presbyterian. “These compounds can’t be regulated, they’re not monitored by the FDA, and quality control can be an issue.” And when consumers play mad scientist, mixing this supp with that supp, they risk enhancing or interfering with absorption of other crucial vitamins, which can cause health issues and imbalances.

Safety concerns aside, a steady drumbeat of research over the past decade has concluded that even “safe” vitamin supplements have little effect on improving health. A now-famous 2013 Johns Hopkins study, bluntly titled “Enough Is Enough: Stop Wasting Money on Vitamin and Mineral Supplements,” reviewed 27 trials of vitamins and supplements and found no clear evidence that taking them prevents any major chronic disease. Coauthor Eliseo Guallar, an epidemiologist and professor of epidemiology at Johns Hopkins Bloomberg School of Public Health, says that since then, no evidence has emerged to change his mind.

That includes anything on omega-3s (“The most recent meta-analysis was basically a wash”) and collagen powders (“Research is scant that collagen improves your skin if taken orally”). Adds internist Donald Hensrud, the director of the Mayo Clinic Healthy Living Program and author of The Mayo Clinic Diet, “The evidence supporting diet is magnitudes greater than supplements — and we now have access to more nutrient-rich whole foods than ever.”

Still, it’s hard to fight the seductive promise that popping a vitamin will bring on more restful sleep or fill in the blanks in our diets. Fifty-two percent of Americans take a supplement, according to the Centers for Disease Control and Prevention. Even David Levitsky, a professor of nutritional sciences at Cornell College of Human Ecology — and a critic of the supplement craze — admits that he takes one multivitamin and mineral supplement a day “as an insurance policy against any deficiency.”

Because no one wants to be stuck with a case of FOMO, even with micronutrients.

Related posts:
10/04/2018 Beauty & Balance Comments Off on How Beauty Supplements Have Changed the Way We View Wellness
Diets News