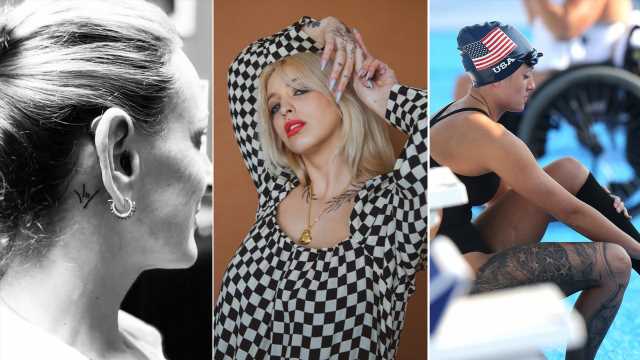 There's a shared evolution between tattoos and disabilities. Although the experiences are not identical, people with tattoos and people with disabilities have both historically dealt with societal stigma, stereotypes, and misconceptions. So, it was almost inevitable that these two identities would intersect, supporting each other's growth as discussions once considered taboo started to lose their shock factors.

I'm one of those people who has both a disability and a bunch of tattoos, but because my body art holds no deeper meaning beyond looking cool, I only just started to understand the greater purpose that can be served by a tattoo. Recently a friend of mine (who also lives with a disability), revealed that her arm tattoo completely changed how she felt about her body. "This was one of the things that reminded me to love my parts, and every time I see it, I feel good about it," she said to me.

After that conversation, I wanted to understand more about how these permanent additions were helping other people re-envision their permanent conditions. Ahead, three more people share how their disabilities have influenced their tattoo collections. 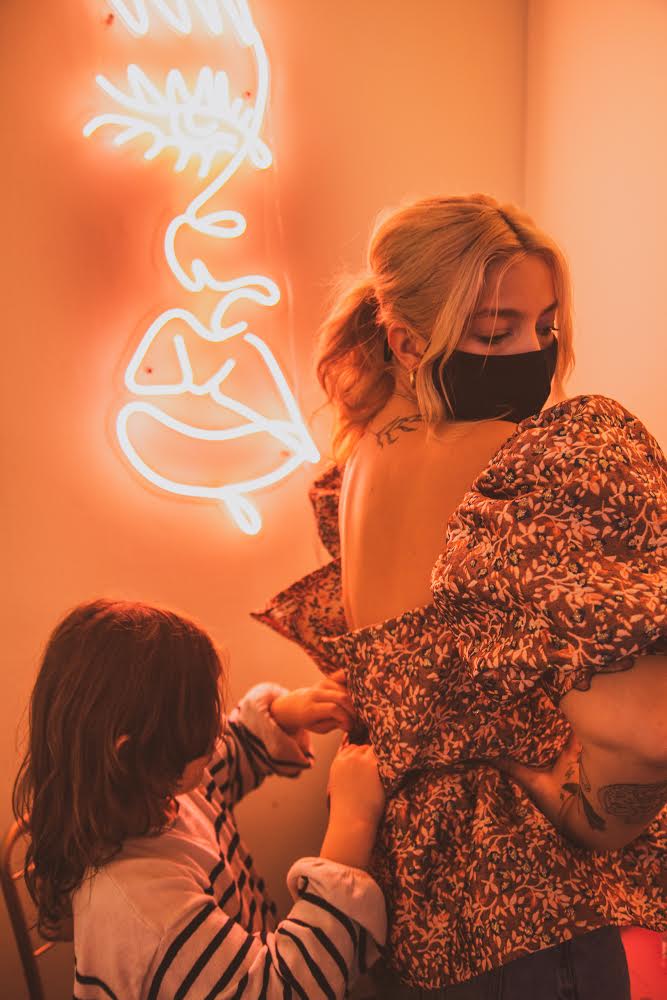 Perhaps no one is as familiar with this intersection as tattoo artist Mira Mariah, aka Girl Knew York, who both tattoos people with disabilities and lives with a disability herself. After undergoing a leg amputation at 17, Mariah began exploring what it looks like to have a disability. Tattoos now occupy a large part of her mindset. "I was only shown a very narrow vision of what a disability would look like when I was younger. It was so wholesome and buttoned up," she tells me. "I felt like I had to be this perfect white woman in every way to make my disability more palatable. So to do it in a way that's like, 'I'm rock n' roll,' and I have all these tattoos, and I'm so happy and having so much fun made it something I became very interested in."

While someone covered in tattoos might not be what initially comes to mind for many people when asked to picture a person with a disability, Mariah would argue that an edgier physical appearance makes sense. "You have to be punk to be disabled because you're living in a world that's not built for you, and you have to reimagine and rework it for yourself constantly," she explains. “I feel that being disabled is so aligned with being rock n' roll, and tattoos are just a part of that for me. I think that's my purpose and my message to the world: Being rock n' roll and being an anarchist and being like 'I'm gonna do it myself. I'm gonna figure it out.' Having that approach to being disabled has really helped me.” 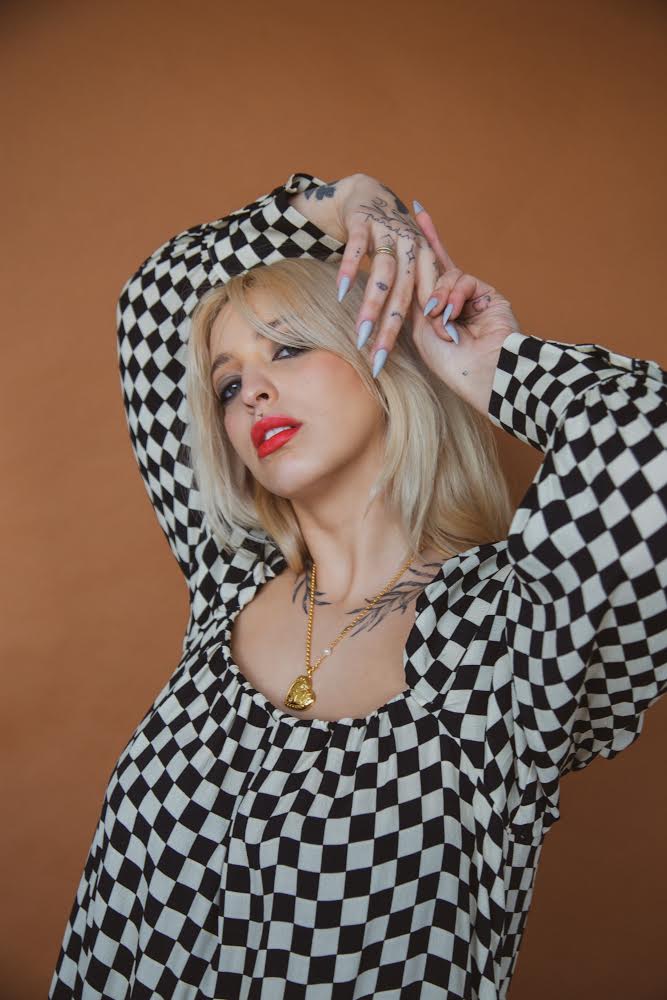 As we talk, Mariah motions to one of her tattoos that started it all. "It's a backward mermaid: a seashell with human legs but one of them is a prosthetic, like mine. It's by Mars Hobrecker, an excellent tattoo artist who also identifies as being disabled. And in getting that piece, I feel like I started my journey of glamorizing disability,” Mariah says.

As an artist, Mariah seeks to bring strength to those wanting tattoos of their own. "I always say, 'this is a decision you make about your body.' Women, queer, disabled, Black, and non-white people have had so many things done to their bodies throughout history that they didn't decide or consent to,” she says. “To save up and get a tattoo feels more impactful and celebratory. It feels like an accomplishment. It feels empowering."

Mariah also explains the peace she finds when tattooing people with disabilities. "An anxiety in me kind of quiets because I know that we understand each other from a place that only two people in the same scenario can." Mariah then shares a beautiful connection that exists between disability and her work. "I can leave out whole limbs, and no one notices or cares. And I think that that was really cool in the early parts of my artwork was that I could make these women amputees, and no one would even know."

Like Mariah, actor Marlee Matlin values the understanding created between artist and client. "[It's important to find an artist] who understands [your vision] too. Who gets it. Who knows where you're coming from and why you want to do it," she says. "My tattoos are representations of parts of my life." The tattoo that most literally represents Matlin's disability is an illustration of the American Sign Language sign for "I love you." "What's so special about this one for me is that I designed it myself and my tattoo artist then replicated it," Matlin says. In regards to its placement behind her ear, "I felt like this is where it belonged. This is a reminder that I cannot hear, but it's my identity as a deaf person." As a child of deaf adults (CODA), Matlin's daughter got the same tattoo. "Because her mom is deaf, she wanted to identify with me, so Sarah has it in the same place behind her ear." 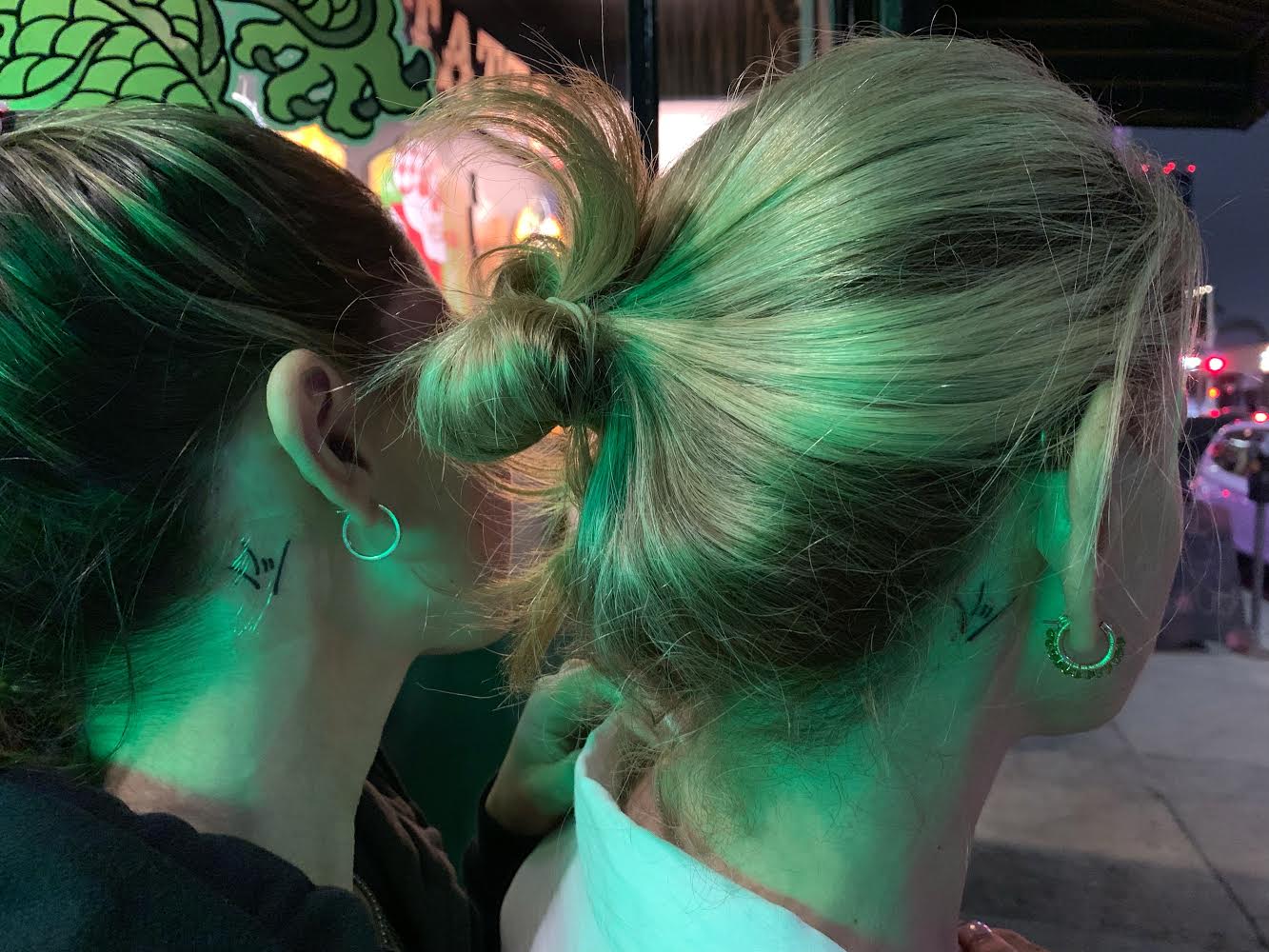 But Matlin says her deafness isn't everything when it comes to how she chooses her tattoos. "My goal is, first of all, to make myself happy and to feel confident enough to be able to design something that I put on my body," she explains, noting that first and foremost she gets tattoos because she thinks they’re beautiful. Matlin has a "little tattoo book," a manila folder that contains her many ideas for future tattoos, one of which she tells me about. "My mother now lives with Alzheimer's, and I gifted her a tattoo for her birthday. It was a sunflower on her back shoulder. So I'm going to have the same one put on myself because I want to have the same thing as my mom, to remind me of her. And you know, when you go into a tattoo shop and see the wall of designs? They're all beautiful. But at the same time, I don't find those kinds of things related to me. I want the tattoo to be extremely personal and unusual at the same time." 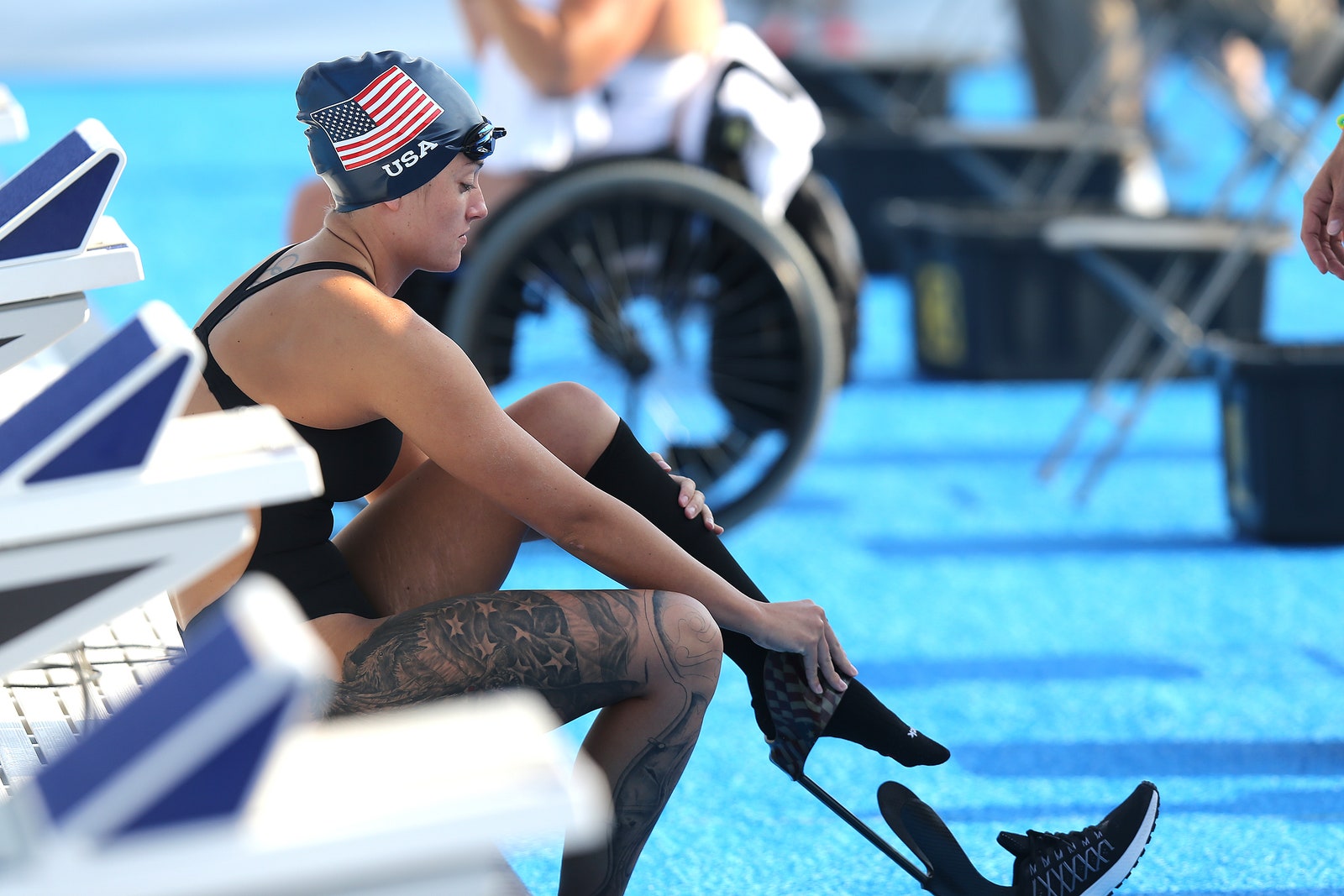 Paralympic medalist Elizabeth Marks uses her tattoos as a means to hold loved ones close. A former combat medic in the U.S. Army, Marks suffered grave injuries while serving. Although she's always been very keen on tattoos, she decided on her larger pieces post-injury. And her tattoos, she explains, come with a purpose, "I have PTSD, and the only color I have on my body are memorial tattoos for friends that I've lost. The rest are black and gray. And [the colored ones] mean the world to me because they center me and help me refocus. Those help me feel worthy because of my survival guilt. Sometimes when I race or do well, I feel guilty, and they help me remember the purpose of being in the water. It's not me. It's more so about my brothers and sisters in the military."

Marks's first memorial tattoo was on her left leg which, she points out with a chuckle, is no longer there. "It was a flower for another medic that I served with. And I'd already started on my [right] leg sleeve, which was my military tattoo where I got my crow, dog tags, an American flag, and a shin guard for the people who saved my life. Once I started swimming, I added the clasps on the back. They're the Paralympic symbol and a water molecule. It was my healing path. When my leg was amputated, I also wanted to represent other friends that I continued to lose along the way. So I finally decided to write down names and asked my artist for red poppies to represent them." 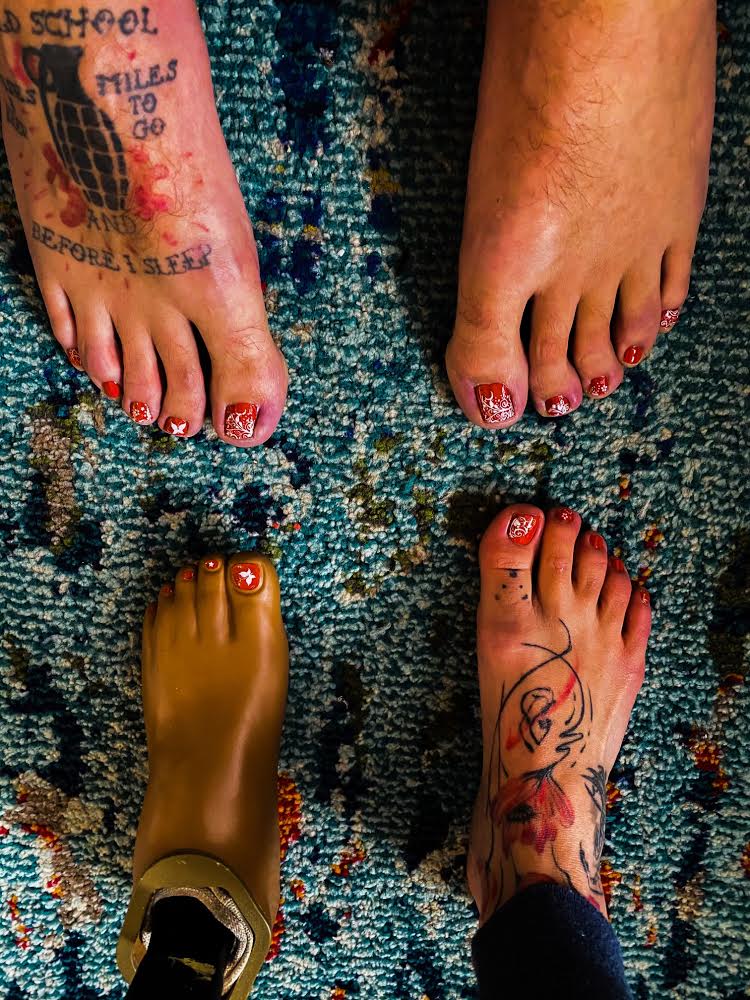 "It's been a process," adds Marks, noting that she truly appreciates being able to collaborate with her various artists. (She's grown to trust one so much that she even decided to blindfold him during a recent session.) I asked Marks if getting tattoos was an active decision to take more control over her body. "My only intent with tattoos was to carry things that are precious to me. I already have scars decorating my body. So why not decorate and celebrate them? Because I have skin grafts, scars, and an amputation, I think [my tattoos] open a door so that younger women and men can ask questions without being uncomfortable. Unintentionally it also opened the door to discussing self-confidence and celebrating scars, which I really think are just nature's tattoos."

People with disabilities are different because of who they are — just like everyone else, disability or not. A disability is another factor that fits into what makes you, you. And like with tattoos, you decide what you’ll make of it. As Marks says, "[tattoos] just morph, and their meaning evolves with you" — a feeling that many of us living with disabilities are familiar with as they continue to adapt, grow, and choose who they are. A tattoo you choose is a tattoo with intention because it’s the choice, above all, that empowers it to have a purpose.

Related posts:
03/27/2021 Skin & Body Care Comments Off on How My Tattoos Have Helped Me Come to Terms With My Disability
Diets News