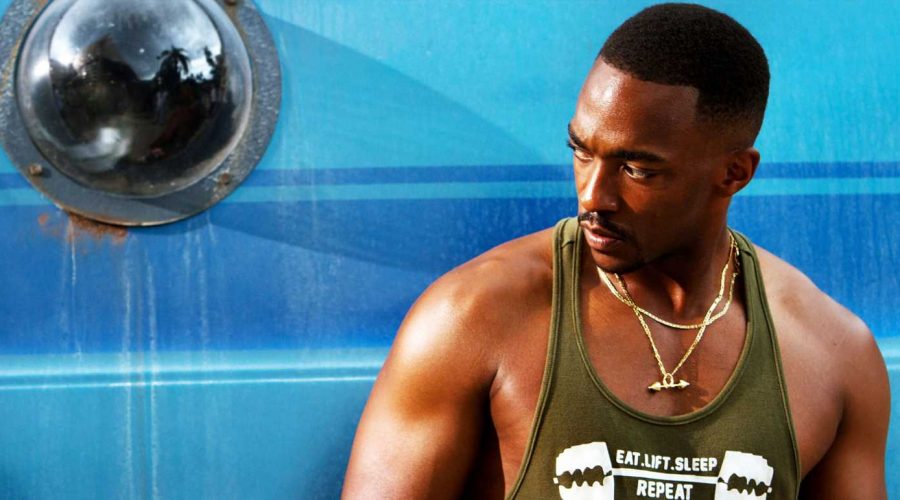 Want arms like Anthony Mackie? The heir to Captain America’s shield looks seriously jacked on our cover, and no, that’s not because of Super Soldier Serum. It’s because Mackie, now 40, knows how to pack on size and muscle when it’s time for a role.

It’s exactly what he did in the lead-up to the 2013 film Pain and Gain, in which he starred alongside muscleheads Dwayne Johnson and Mark Wahlberg. And his tactics for bulking up for that film were pretty simple: Lift hard and heavy. “I was doing heavy lifting, and no cardio,” he says. “I was max repping. “At the end of every set, I would max out. I was doing chest and thighs, back and tris and shoulders, and then Friday would be legs, and I would start over again. It was just constantly ripping the muscle, giving it four days to recover, and then going right back into it.”

So much for all the talk you hear today about total-body workouts and high-intensity interval training. When Mackie wants to muscle up, he heads to classic bro splits, and there’s a reason for that: They work! There’s a reason that the biggest, strongest guys in the world, and the guys who look like superheroes (like Mackie!) aren’t living their lives doing HIIT workouts. If you want to build serious muscle, you have to lift heavy and then give your muscles a break.

Training Mackie-style can help you add serious bulk and strength to your body in ways that HIIT protocols can’t, which is why it’s the backbone of most of my own training. It’ll gives you a chance to really feel each muscle, instead of just breaking some pointless sweat, and it allows you to attack a muscle instead. You need a few days of recovery between such workouts, which is why Mackie attacked only a few bodyparts (or in the case of his Fridays, a single bodypart, his legs) in any given workout. You need a plan to build your body this way, not random fitness classes.

Interested in trying a Mackie-style workout? Give this arm blast a try—and don’t be surprised if it leaves you with such a good pump that you a little more like the new Captain America when the session’s done.

Do this arm workout twice a week, resting at least two days between each session. On the days in between each arm workout, train other bodyparts. Do back one day and legs the other. Here’s a sample of a leg workout you might do on one day, and a chest workout you can attack on another. If you train this hard, make sure to get plenty of sleep to recover between workouts. Your sore muscles will need it.

Start every workout with some light mobility work. Open by doing 3 minutes of sit-thrus, working for 30 seconds, then resting for 30 seconds in each minute. Then do 2 30-second planks, and jump into the workout.

Do 10 to 12 reps. Work through 4 sets, focusing on really squeezing your biceps.

Do 8 to 10 reps, aiming to use as heavy a weight as possible with good form. Do 3 sets.

Work through the total arm countdown finisher below 3 times. This should finish off your arms. Leave the gym feeling swole.