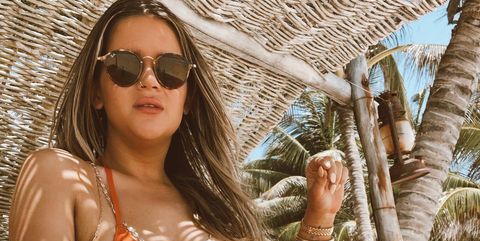 Just days after taking home two American Country Music awards last Sunday, Maren Morris and her husband Ryan Hurd are enjoying some well-earned downtime in paradise. In a beachy Instagram post from their getaway, Maren showed off her toned abs.

She captioned the beach series: “Tan almost everywhere. Jan almost everywhere. 🌴” In several of the photos, the “My Church” singer is wearing a teeny orange bikini and a body chain. Maren is rocking it with her rock-solid abs. Her famous friends noticed and showered compliments on the mom with many 🔥 emojis. Kristin Cavallari wrote: “Damn girl! 🔥”

Maren, who is mom to one-year-old Hayes, started working out again less than two months after giving birth.

“We are back to training again and she is a badass and I’m so proud of her,” her trainer Erin Oprea told Us Weekly. “She worked up until basically the day, I think we trained like a day or two before she had the baby. And then we’re back at it.”

While she’s on tour, Maren works out remotely with Oprea, who is the go-to trainer for country stars like Carrie Underwood, Kacey Musgraves, and Kelsey Ballerini, too. She rolls out a yoga mat on the tour bus and does bodyweight exercises, and jumps rope to warm up. Some of her favorite strength exercises are front and side planks, pushups, squats, lunges, and lunge-squats. Then, she does crunches and core work with a BOSU ball, and lifts free weights to tone her arms. Oprea also likes to mix in Tabata bursts.

“They think of it as a game and the time goes by so fast,” Oprea told E! News. “They always say those are the fastest ones.” She also asks her clients to walk 10,000 steps per day and workout three times a week.

For food, Maren starts her day with three egg whites and spinach cooked in olive oil, and wheat toast, she told Women’s Health in 2019. At lunch, she usually eats a salad with protein, and stops eating at 5 p.m. on show days. “When I’m out there, I make it count. I know I’ll feel awful if I don’t eat right after burning all those calories in the show,” she said. After performing, she has another protein salad, like skinless chicken over spinach with lemon vinaigrette, and a drink like rose or tequila and soda.