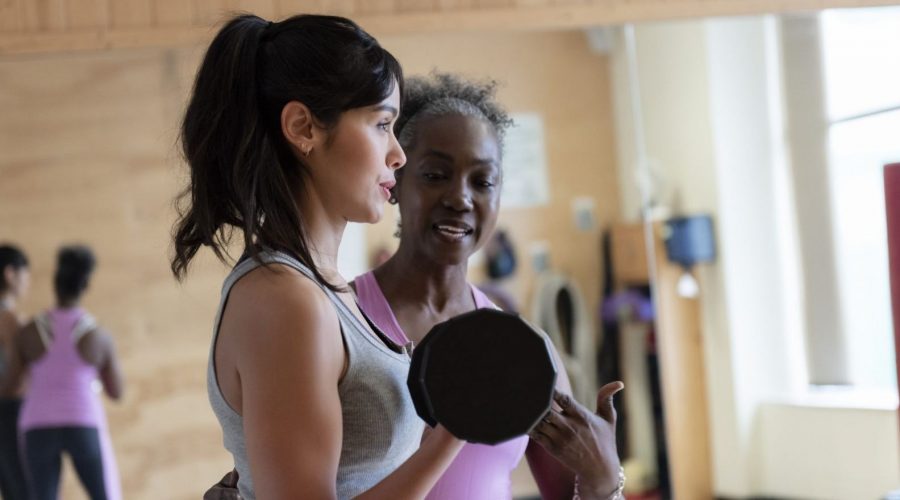 The fitness industry is getting better but some trainers and instructors still think that clients find inspiration in calorie burning and “beach ready” bodies. When writer Rebecca Reid found that her class had been taken over by a PT who used triggering language, she tackled the issue head on – and you can too.

In 2019, it was reported that almost a third of women under the age of 35 feel too self-conscious to join a gym. It’s a sentiment that I understand all too well. I can speak in front of a crowd of hundreds of people or go on TV for a debate without breaking a sweat, but going to the gym always frightened me. For most of my life, when I occasionally deigned to take exercise (usually motivated by a period of self-loathing and some ludicrously low-calorie diet) I would sidle up to the treadmill hoping that no-one would look at me, believing that because I wasn’t an athlete, I didn’t deserve to be there.

It came as something of a blow when, in my mid-twenties, I discovered that working out was the key to managing my issues with anxiety. Why couldn’t the cure have been eating ice cream and watching old episodes of Dance Moms?Sadly, it was undeniable that in order to stay sane, I needed to regularly sweat. So I set about trying to unlearn the lesson that working out was a punishment.

I bought a pair of trainers which actually fit and I started walking more. Walking became the occasional run. I took dance classes, HIIT classes and spin classes. I forced myself to say “I am going to the gym” rather than “I have to go to the gym”. I stopped factoring my workouts into my daily calorie intake. I bought leggings which made me feel good and splashed out on fancy water bottles. Little by little, year by year, I chipped away at the idea that the gym was something I forced myself to do and eventually, I started to become someone who viewed moving her body as a pleasant and important part of life – like sleep. And then a new instructor took over my regular Wednesday afternoon class.

Exercising with an eating disorder: how to begin moving for joy again

Without meaning to, this instructor – let’s call her Sophie – managed to undo years of progress in minutes. Every instructor at my gym is almost embarrassingly positive. When they tell you to run faster or jump higher it’s was always “you’re doing amazing – don’t leave anything in the tank – you can do this”. But Sophie was different. She kept saying: “Don’t worry – we’re almost done” and: ‘Only 20 more minutes of class to get through!” She talked like being there was a chore, the exact mentality that I had spent my adult life trying to escape. Afterwards, I went home sad and less sweaty than usual, unable to push through the feeling of resentment that I was sitting on. I felt like my happy place had been taken away from me, like all the work I had done to make the gym something I looked forward to rather than dreaded had been pointless. And most of all, I felt pathetic for caring so much. I was inwardly beating myself up for being so sensitive, for not having the resilience to just ignore what the instructor was saying and focus on getting my sweat on.

I’m not the only person who has found themselves at their wit’s end following a troubling gym experience. Helen, 32, told me that she was happy at a running club until one of organisers started talking about calories “pretty much non-stop”. “I had an eating disorder as a teenager so being reminded that for her, (running) was a part of dieting felt really hard. But I didn’t want to say anything in case I hurt her feelings.” Another former gym-goer, Fatima, decided that it was better to drop out of her class than confront the situation. “One of the people leading my spin class kept making comments about bikini bodies and getting in shape for summer. It made me feel so uncomfortable that I just stopped booking her classes. It was the best time and location for me, but eventually, I fell out of the habit of going at all,” she explains.

What are you supposed to do when someone at your gym starts using language which you find genuinely triggering? Hannah Lewin, who is an anti-diet culture personal trainer, says: “I genuinely believe that the overwhelming majority of instructors and trainers, while perhaps sometimes misguided, do not have malicious intentions and genuinely believe that they are being motivational.” For those of us who don’t work out for weight loss, however, Hannah says that these “motivational” messages can have the opposite effect –  “causing participants to become frustrated and disengaged, and unlikely to return to the class or to work with that trainer”.

So, what should you do about it? Hannah says you’ve got two options. The first is to try to work through it. Hannah says: “You can try to move past it, remembering what your own reason for participating in the class is and allowing that reason to be your focus for the rest of the class, rather than what the instructor is saying.”

If that isn’t an option, you can absolutely speak to the instructor in question. Hannah suggests: “A polite but firm comment, followed with a brief explanation of why you are there if you are comfortable sharing is usually sufficient, and you may even end up educating them in non-weight focused exercise!”

Body neutrality: “Taking a break from Team GB finally taught me look at my body differently”

I knew that my options were avoiding classes, or speaking up. So, I spoke to my gym. I told them some of the things I liked about Sophie – her energy and enthusiasm, the fact she was so clear in explaining the moves – and then I told them that I was struggling with the fact that she sometimes framed things negatively. I was terrified they were going to tell me not to be such a princess and to get over it. I shouldn’t have worried. They told me they were grateful for the feedback and glad I thought the other instructors were so positive.

A few weeks later – just before the gyms shut once again, I went back to class. Her dialogue had changed a bit, and so had my mindset. When she did make comments about the class being “nearly over” or said that we should “grit our teeth and get through it”, I tried to focus on letting the words roll over me and find the enjoyment in the movement, acknowledging my discomfort but trying to remember to be resilient.

I’m no longer the teenager hiding in the corner of the gym, praying that no-one will notice I’m there, feeling like a fraud. But that doesn’t change the fact thatthe gym will always be a vulnerable place for me, like it is for a lot of women. What someone says or does in the gym means more to me than it does in any other setting because I have fought so hard to be there in the first place.

I’m no longer the teenager hiding in the corner of the gym, praying that no-one will notice I’m there, feeling like a fraud. But that doesn’t change the fact that the gym will always be a vulnerable place for me, like it is for a lot of women. What someone says or does in the gym means more to me than it does in any other setting because I have fought so hard to be there in the first place.

We shouldn’t feel obliged to listen to comments which make us uncomfortable or make it feel like an unsafe space – especially as paying customers. If your fitness providers don’t share your mindset, there’s nothing wrong with saying something, choosing another class or even another gym. The important thing is that you don’t let someone else’s comments put you off from finding the pure joy that comes when you are just able to enjoy moving your body.

HOW TO CHAT TO YOUR TRAINER

Identify the problem. What is it about their language that you find problematic? Is it something you can acknowledge and deal with yourself or do you need something externally to change in order for you to feel comfortable working out?

Keep a record. Make a note of when they say it and in what context so that you have examples to use when the time comes.

Talk to your gym. Ask for a feedback email address or DM them on social media. If they’re a decent company, they’ll want to make sure that paying customers are happy using their services so will be only too glad to receive any guidance. Best of all, your feedback should be relayed totally anonymously (and if in any doubt, set that out in the email).

Chat with the trainer. If you feel comfortable, chat directly with the trainer and explain why some of their language doesn’t work for you. They’re there to motivate you and to help you work towards your goal – so as long as you keep the conversation constructive, they should be receptive to your feedback

Switch workouts. If you really can’t face a certain trainer and talking to them isn’t an option, don’t be afraid to switch classes, gyms or exercise type. Prioritise your own well-being and if that means taking a break from a gym in favour of running in the fresh air, doing home workouts or hiring a new PT, then go for it.

Follow on @StrongWomenUK Instagram for the latest workouts, delicious recipes and motivation from your favourite fitness experts.

Related posts:
02/11/2021 Fitness Comments Off on How to talk to your PT about triggering language
Diets News