I can’t count the number of times I’ve had a guy come up to me at the gym and offer “helpful advice” about my form or workout, “You really shouldn’t squat so deep — it can hurt your knees,” or “You know, if you do the same movement with a suspension trainer, there are even more benefits.” Best of all? “Hey, if you need some tips, I can help you take your workout to the next level.” (This last person wasn’t a personal trainer.)

Typically I smile, offer a simple thanks, and disengage. It’s a waste of breath to try to explain that I have a Master’s Degree in Exercise Science, hold six certifications in the field, have taught Exercise Science at a university and have literally written books and articles on the subject for more than 10 years. What I don’t have? A penis. And for untold reasons, in some men’s minds, being a proud owner of a penis is the magical key that unlocks untold depths of fitness knowledge.

To be fair to my unsolicited advice-givers, it’s one thing to offer such advice to a stranger at a gym. I still didn’t welcome the intrusions, but for argument’s sake maybe these guys were just looking for a way to break the ice and start a conversation. It’s an entirely different situation when the “advice” is coming from a boyfriend, lover, or spouse, when there’s no obvious reason why the more “masculine” partner holds more knowledge of the subject. And this doesn’t just apply to straight guys–there’s dudes in every type of relationship who feel like their virile masculinity more than makes up for actual fitness expertise.

This phenomena has been heightened with the coronavirus pandemic, which has forced more “togetherness” in life and in workouts, with couples quarantining and exercising more at home.

“I’ll be in the middle of a workout, dying, and my husband will come in and just stand there watching. It’s awkward!” shared Alissa Angelo, 41, the Assistant City Manager of a small city in Oregon. “Then he’ll comment on how I shouldn’t do the move the way I am and tell me how he watched a video showing the correct way to do it. I’ve been working out for 20 years—I’ve worked with personal trainers and really worked to educate myself so I don’t get injured.”

Angelo is not alone—many women have found themselves yoked to a “personal trainer” who has no more verifiable knowledge of the subject than themselves.

The thing is, if you find yourself itching to share fitness tips with your significant other, chances are you’re coming from a good place. Maybe you want to offer support, or you’re excited about something new you just learned and want to share it with your girlfriend. Angelo, for instance, knows that her husband isn’t setting out to annoy her or demean her own knowledge. He just can’t seem to help himself.

But aside from the fact that offering unsolicited advice is almost always a surefire way to start a fight (particularly if your girlfriend feels like you’re criticizing her body or routine when you make the comments), there are a number of reasons you should hold your tongue before you try to tell your girlfriend how to train.

She May Know as Much (or More) Than You 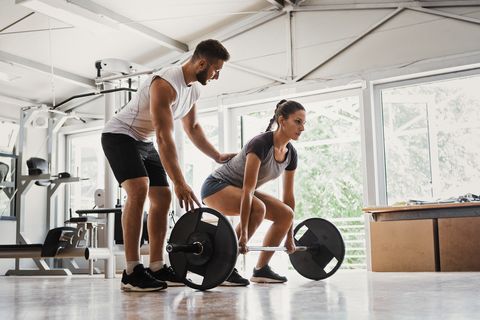 While there is truth to the fact that guys, in general, still appear to exercise more than women, particularly when it comes to strength training, these disparities are shrinking. Data from the 2011 to 2014 report by the CDC, Health Behaviors of Adults, found that almost 54 percent of males met the federal guidelines for aerobic activity compared to 46 percent of women—but a 2014 study published in the International Journal of Liberal Arts and Social Sciences found that in general, female undergraduate and graduate students reported performing more exercise than their male counterparts.

Of course, women and men might be performing different types of exercise (the women in the 2014 study reported exercising more frequently, but reported less intense forms of activity), but when it comes to meeting health and lifestyle guidelines, the ladies aren’t slacking off when it comes to getting sweaty.

Not to mention, the rise in popularity of women’s sport participation since Title IX passed in 1972 has led to several generations of incredibly athletic women. These women aren’t just quitting athletics once they leave high school or college, either.

When looking at participation rates in CrossFit, the “sport of fitness,” 2014 market research reported by Rally Fitness found that there is a 50/50 split—no statistical difference—in men and women. Since then, the sport has only gotten more popular. And when it comes to running, a 2019 The State of Running report put out by Run Repeat and the International Association of Athletics Federations (IAAF) found that women actually made up more than 50 percent of all race participants, with female 5k participants edging toward 60 percent.

The point being, just because you’ve been hitting the weights on-and-off since you were a teen, that doesn’t mean your girlfriend hasn’t been, too. Depending on her background, experience, and personal goals, she may be every bit as well versed as you.

If You’re Not a Personal Trainer, It’s Best to Keep Your Mouth Shut 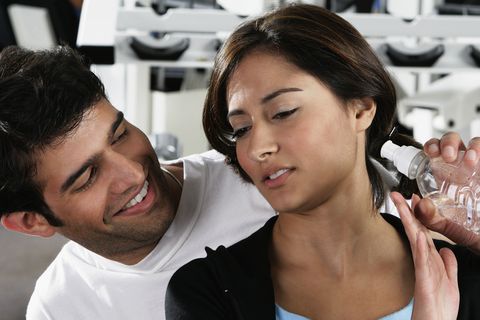 For some dudes, the fact that they’ve paid dues for a gym and performed a squat is somehow proof enough that they know everything there is to know about exercise and are an expert on form. But guess what? That’s simply not true.

There is a reason why there are entire educational paths dedicated to exercise and sport, with high-level certifications and years of experience required to hold many positions. Every body is different, every goal requires personalized training, and proper mechanics and form for one person might need to be modified for another person due to factors like joint and bone angles, previous injuries, flexibility, and muscle imbalances.

Even if you’ve worked with your own personal trainer to come up with a plan that works for you, your plan might not translate and be a good fit for your significant other.

And even more to the point, 2015 research published in the Journal of Strength and Conditioning Research found that the more formal education (at least some college-level material within the field) a personal trainer has, the better they perform on knowledge tests related to fitness and training. In other words, even personal trainers with multiple certifications tend to perform more poorly on knowledge-based tests than personal trainers who have an education in the field. And all trainers, as a whole, who responded to the survey, scored an average below 50 percent. That’s not great, by the way, and that’s from actual professionals within the field. We’re not suggesting that your trainer doesn’t know what they’re doing when they’re working with you—certs and tests can only prove so much, after all–but it’s a safe bet that you passing along secondhand knowledge without any knowledge base is not the same as in-person instruction from a qualified professional.

So if you, as a boyfriend and a well-meaning partner without a training certification or education in the field start doling out advice to your girlfriend… chances are the advice you’re giving isn’t going to be as sound as you think. So rather than annoying your loved one and risking a fight, maybe try to avoid doling out unsolicited advice instead.

Related posts:
01/21/2021 Fitness Comments Off on Guys, Stop Trying to Train the Women in Your Life
Diets News