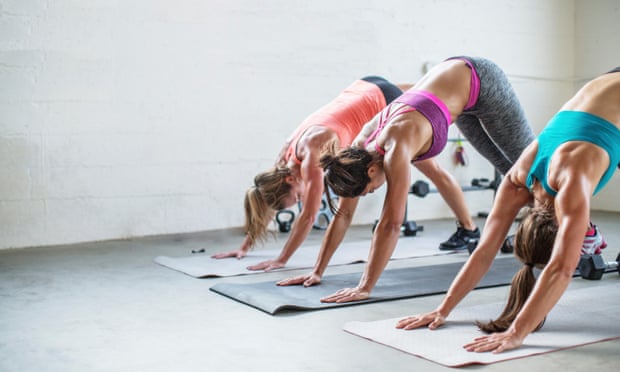 If there is one thing that irks me more than the awareness-raising month – Go Sober for October, grow a moustache to celebrate your prostate through November, etc – it’s the signal-boosting day. Yesterday was Fitness Day. Sorry, let me give that its proper title: #FitnessDay. The space bar is always the first casualty of a manufactured social media movement.

The tweeting began before 6am, as healthy, responsible people announced to the world that they were going to the gym for their 6am workout, and might go for a run later. Public Health England published a timeless graphic, describing everything that counts as “moderate physical exercise”, including “active recreation”, also known as “moderate physical exercise”. By 7am, someone had posted a picture of themselves doing a complicated yoga posture on a log, and I was as angry as a bull. The problem wasn’t the hashtagging; the problem is with fitness itself.

I have been writing a fitness column for a year and in this time I’ve digested very little about what exercise does for your body. I still have to Google what counts as maximum-intensity every time I feel moved to talk about it, which is all the time – but I know everything about what it does to your personality, and none of it is pretty. Start doing something new, and you can’t stop talking about it. As you read this, I’m probably prattling compulsively about my newfound love of hot yoga. Whoever I’m talking to, I can see they’re not interested, because it isn’t interesting. I often end with: “You should come! There’s a class this Friday!”, which is a way to justify having brought it up, and suddenly I’ve asked a distant acquaintance to spend 90 minutes with me in the intimate environs of a sweatbox, and they are wondering why, and I am wondering why, but really I know why: I didn’t want to stop gabbling.

It’s not really talking, though, is it? It’s boasting. Fitness boasters try to cover this up by featuring their dog in a selfie (“beautiful morning run with my buddy!”), or amplifying their own unworthiness in the face of an arduous task (#challenge), but the showing off couldn’t be plainer: “Here I am, improving myself, with willpower and grit, and because I was so great to start with, I’m shortly to become even better.” In normal life, we learn not to do this at roughly the age we learn not to bite people when we’re cross: when did you last blow your own trumpet about your prodigious intellect, or your sex life, or your eyelashes? It is the height of rudeness to burden another person with a remark to which there is no zesty reply (“This is my fourth Zumba class this week”), but courtesy vanished with modesty when you set your alarm that bit earlier.

Do too much, and the self-love develops a carapace of self-sufficiency. This is especially a problem for cyclists, who come to think of themselves as an off-grid warrior class, having performed their commute drawing on no more resources than their own glutes, and maybe a sports drink. Unavoidably, over time, this makes you more rightwing, as you descend into an aerobics-powered moral universe where only the weak need each other, and all the strong need is a waterpouch in their backpack that pipes straight into their mouths.

As part of #FitnessDay, some stark figures were revealed; 1.4m cats don’t get enough exercise. Before you wonder how to spur your cat to better self-care, consider: a cat would never tell you about the time it pushed itself to the max. Those felines exercise plenty, but they don’t bang on about it, because they are cool.

Our ‘brave boys’ are heroic to put up with pollsters

How heroic do you find the armed forces? And is that just those in active combat, or also the ones who fix army IT and count parachutes? I found the questions on YouGov’s recent poll peculiar, but I often do when they ask us to make qualitative judgments about one another (do benefit claimants want to work? Are migrants ambitious? – there is no possible answer beyond “I’d have to take this on a case-by-case basis”).

Typically, though, the results are revealing, even if the inquiry is meaningless. In the US, perceptions of heroism are huge, 50% saying that everyone is a hero, whatever their role. In Britain, there is a straight split – 32% to 31% – between people who find heroism in every army-related act, and those who find it only in “particular bravery”. Germans are the most sceptical: the greatest proportion, a third, said: “No members of our armed forces should be described as heroes.” This isn’t really about soldiers. The subtext of nationalist exceptionalism – all our soldiers are heroes, and everyone trying to harm them is evil, even though they are, presumably, someone else’s soldiers – is louder than the text. Beneath that, though, there’s an equality story.

The anthropologist David Graeber once hypothesised that, in nations and eras with low social mobility, the army was often the only institution with reasonable career progression: families who knew their kids would never be international human rights lawyers could nevertheless imagine the scenario in which they became officers. The risk that they might die along the way only intensified – understandably – their derision of lawyers and valorisation of the army. It’s another proxy culture war, mediated through people who are busy with actual wars. I would find it annoying if I were a soldier; I find them heroic just for putting up with this.

From the people who brought you the Ostrich Pillow – which lets you nap anywhere, the next best thing to being a baby – comes the three-way hood: you can wear it as a hood, or as a snood, but its unique selling point is “eclipse mode”, where you pull it right over your face and that alerts people to the fact that you don’t want to talk to them. So, someone has just reinvented a pillow case, for a generation of people who have forgotten how to deploy a simple, offputting grumpy face. It’s the hood that says hell-in-a-handcart.

Related posts:
10/04/2018 Fitness Comments Off on Do you boast about your fitness? Watch out – you’ll unavoidably become rightwing
Diets News