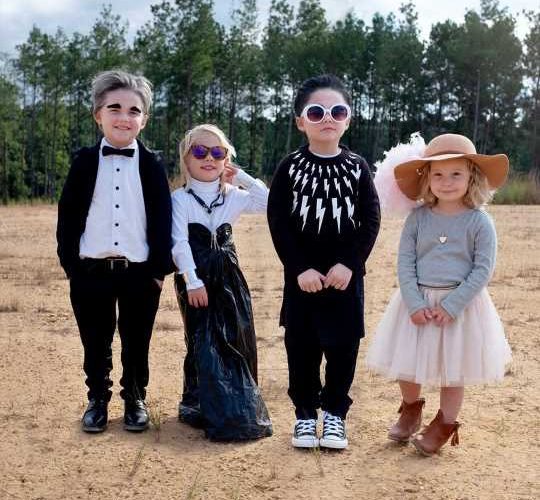 It's never too early to start sharing your Halloween costumes — or love for Schitt's Creek!

Following the beloved comedy's big night at the Creative Arts Emmys, where the series and its stars took home a total of nine awards, one mother enlisted the help of three children for a very fitting tribute.

Lauren Mancke, who has a yearly tradition of making DIY costumes for her children for the entire month of October, celebrated Schitt's Creek's Emmys sweep by dressing her kids up as the Rose family.

"Ew, David, we like won all of them," Mancke captioned the adorable photo, referencing Alexis' favorite catchphrase.

"An unbelievable and well deserved sweep of the Emmys last night for one of our favorite shows, 'Schitt's Creek.' Such talent!" she wrote, as she shared a "sneak peek of our month long costume craziness."

The costume even caught the attention of the critically acclaimed show, which commented from its official Instagram account, describing the coordinating costumes as "brilliant."

Ew, David, we like won all of them. 😁🤣 An unbelievable and well deserved sweep of the Emmys last night for one of our favorite shows, “Schitt’s Creek”. Such talent! This also happens to be a sneak peek of our month long costume craziness. When I thought maybe we shouldn’t do #manckemonthofcostumes this year, I just kept thinking, but we just have to do @schittscreek. As Moira would say and with the vigor of a wartime radio operator, the show must go on! Be sure to follow along for DIY costumes every day in October using @primarydotcom clothing. . . . #yestoprimary #SchittsCreek #emmys #emmys2020 #DanLevy #EugeneLevy #CatherineOHara #AnnieMurphy #DavidRose #JohnnyRose #MoiraRose #AlexisRose #primarydotcom #halloweencostumes #schittscreekmemes #primaryhalloween2020

Although the mother of three said that they initially thought about forgoing the annual tradition this year, she couldn't resist the opportunity to share a special farewell to Schitt's Creek, which aired its final season earlier this year.

"As Moira would say and with the vigor of a wartime radio operator, the show must go on!" she added.

In the adorable shot, her 3-year-old daughter Marigold wears an elegant ensemble to bring to life family matriarch Moira, while her daughter's twin Lera mirrored Alexis' signature style, according to Popsugar. Meanwhile her 6-year-old son Fox pulled double duty, posing as David and Johnny — who are played by real-life father and son duo Eugene and Daniel Levy.

Mancke went on to share that the family hoped their pop culture creation would bring a smile to people's faces amid the coronavirus pandemic.

"We've decided to do our month of costumes again this year, like in years past, to bring joy to people, which I know our family needs this year more than ever," she told Popsugar.

"After losing my grandmother earlier in May to this virus, we want others to know Halloween isn't canceled and we can still find fun in new creative ways."