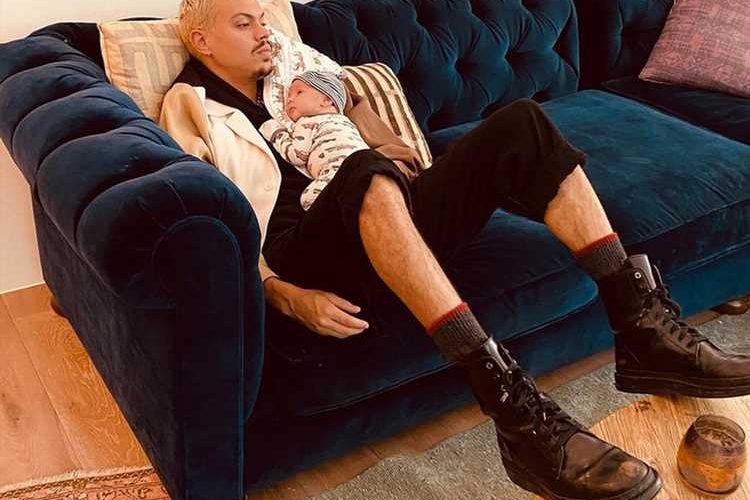 Evan Ross has been able to find a silver lining amid the COVID-19 pandemic: more time at home with his family, including his brand-new baby.

On the latest episode of the new PEOPLE Every Day podcast, hosted by Janine Rubenstein, Evan opens up about being thankful for the time he has had at home with his wife, Ashlee Simpson Ross, and their kids: 4-month-old son Ziggy Blu and daughter Jagger Snow, 5½, plus Simpson Ross' 12-year-old son Bronx Mowgli.

"You take it [one] day at a time," says the actor and musician, 32, who stars as Agent Sam Williams in Hulu's recently released The United States vs. Billie Holiday. "All in all, you've got to remind yourself of how lucky we are in the sense that we get to have these moments that we may have not had the same way, if we [would have had] to work."

With vaccinations picking up and normalcy on the horizon, though, Ross knows things will change soon. "I've got to shoot something in London in a few days, [and it's] going to be tough to leave," he says. "What a bonding experience with all of them. With Jagger, I feel like there's been a lot of learning experiences that I feel like I may have missed a little bit of [otherwise]."

Evan Ross Says Daughter Jagger, 5, Was Initially "Furious" About Getting a Baby Brother: "So Upset"

Evan says that juggling co-parenting responsibilities with Ashlee, 36, during the last year, has been easy because "it's been about being a team," but he does miss the moments he would have shared with his large extended family, including mom Diana Ross, sister Tracee Ellis Ross and sister-in-law Jessica Simpson.

"The hardest part [has been not] seeing my family that have their own families, and my mother," says Evan. "Because we're such a close family that we see each other all the time. … And especially with the new baby, I would love to have our baby around the entire [family]. We get to all be on the family text and that's special, but the kids miss their cousins."

Want to get the biggest stories from PEOPLE every weekday? Subscribe to our new podcast, PEOPLE Every Day, to get the essential celebrity, entertainment and human interest news stories Monday through Friday. And hear more from Evan on today's episode, below.

He's been able to find a family connection in an unexpected place: work. Evan's role as Agent Williams in The United States vs. Billie Holiday is extra poignant because his mother Diana, 76, was nominated for an Oscar for her portrayal of the jazz legend in 1972's Lady Sings the Blues, a previous biographical film based on Holiday's life. Diana's role in the film "was one of the reason why I wanted to start to act," Evan says. "I thought she was so incredible. Knowing her as my mom and then seeing her in this performance, it was hard to watch in moments of her transformation in age. … Watching it back now, after I hadn't seen it in a while, it's a magical movie."

He says that his mom has been equally enthusiastic about her son's work in his film about the iconic singer.

"She's been extremely supportive and she's seen the movie and she thought Andra [Day]'s performance was incredible," he says. "And cinematically, it's so beautiful."

The United States vs. Billie Holiday is streaming now on Hulu.

Check out more from Evan Ross' interview on PEOPLE Every Day, airing now on iHeartMedia, Apple podcasts, Spotify, Stitcher or wherever you listen to your podcasts. Related posts:
03/09/2021 Family Health Comments Off on Evan Ross Feels 'Lucky' to Have Had More Time with Kids amid Pandemic: 'What a Bonding Experience'
Diets News