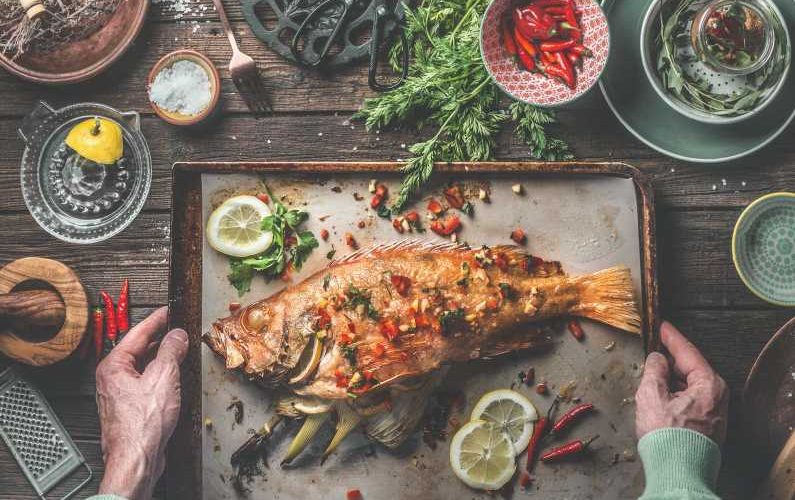 The beloved Mediterranean Diet is sort of like the prom king of diets.

“Best diet” lists love to sing its praises and the research community continually crowns it with superlative after superlative:

The best diet for heart health!

It’ll reduce your risk of stroke!

And all you have to do is eat like you live amidst the coastlines of Greece—fresh fish, bounties of vegetables, lots of olive oil, and (of course) fine wine.

As a dietitian who advocates for the benefits of all those things, I also have one big problem with the Mediterranean Diet: it’s exclusive.

Or at least the perception of the Mediterranean Diet is exclusive—one that’s focused mainly on Greece, Spain, Italy, and France.

But—and this is a big but—there are 18 other countries in the Mediterranean as well. Yet their foods, flavors, and cultures are rarely included in the beloved “diet” that’s talked about as “the best.”

Northern Africa has many countries along the Mediterranean Sea, including Morocco, Algeria, Tunisia, Libya and Egypt. Same goes for the Middle Eastern countries of Turkey, Israel, Syria, and Lebanon. Yes, there’s some overlap among many of these cultures in terms of food, yet often the combinations, preparation methods, flavorings, and seasonings from most of these other countries are rarely discussed when the Mediterranean Diet is given its gold medal.

The Mediterranean Diet has been romanticized and it is far from inclusive.

“The Mediterranean Diet that truly encompasses the 22 countries around the Mediterranean Sea have unique flavor profiles, seasonings, herbs—foods with lots of spice and heat, but then also mixing sweet and spice,” Feller says. “There isn’t a single ‘diet’ that encompasses the entire Mediterranean region—spice-laden dishes of Morocco bear little resemblance to the lemon- and caper-laced cuisine of southern Italy. Instead, Mediterranean cooking is about what these cuisines have in common: a daily emphasis on vegetables and fruits, beans and lentils, whole grains, more seafood than meat and poultry, and heart-healthy olive oil. Fresh, high-quality ingredients and simple preparation techniques let the extraordinary flavors shine.”

This all reminded me of a conversation I once had with colleagues in Turkey, over cup after cup of what’s called Cay, or Turkish Tea “which is served from sunrise to sunset, at weddings, funerals, work meetings.” says Merve Doran, founder of Oleamea Olive Oil, a Turkish company. And that’s a perfect example—in Italy and Spain, espresso is the go-to, while in Tunisia, it’s mint tea. And in Turkey, it’s Cay. Foods, drinks, flavor combinations—all of it, differ among the regions. And each of these foods and drinks each have their unique health benefits.

Unfortunately, much of that is lost when paired down to what fits the U.S. lens of the Mediterranean Diet. And there’s certainly nothing wrong with the typical foods that are typically emphasized – veggies, seafood, olive oil, pasta – are all amazing, but considering the melting pot that is America, some of these other flavors and combinations should be celebrated, explored, and savored as well.

“I think the most important aspect for folks to realize is that every culture has dishes, but they are cooked a different way or might look different,” says Shana Spence, M.S., R.D.N., C.D.N. of The Nutrition Tea. “I find that most people tend to think of roasted veggies, which is fine and delicious, but sauces, salsas, soups, stews, etc. are all dishes with vegetables which also offer nutrients.”

Embrace the real Mediterranean Diet in its entirety. If you love to cook, consider a cookbook that highlights some recipes from countries in Northern Africa or maybe another in the Middle East. Maybe you eat out regularly; if that’s the case, great, consider some different restaurants that offer unique foods, flavors and influences from a variety of cultures.

Explore new spice, flavors and preparation methods to make them your own and reap the flavor and health benefits of doing so. And, yes, all of this can be enjoyed sipping on some Italian red wine with a side of Israeli burnt eggplant and Syrian pita and hummus, all drizzled with Turkish olive oil.

Chef Blitzer says he infuses many of these cultural flavors into the foods that are featured on the weekly, rotating menu with his team. “I moved from Israel when I was 6 years old. Israel is a melting pot of cultures. From the different regional foods for the Levantine countries all fused together with flavors from Europe, Africa, Asia and Latin America. All these different cultures came together and recreated local dishes with new flavors and techniques. “Flavors I grew up with are often in my dishes, like our ‘Burnt Eggplant’, that’s one of our more popular dishes on our menu.”

How to Make It:

1. Use a fork to poke holes all over the eggplant. Grill the eggplant over high heat or under a broiler until blackened and very soft, about 20 minutes on each side. Set aside to cool.

2. In a medium bowl combine the garlic, lemon juice, and salt. Whisk in the tahini and water until the mixture is smooth.

3. Once the eggplant is cool to the touch, halve each lengthwise. Take a fork and gently scrape the soft flesh from the eggplant and onto a serving platter. Top with salt, tahini sauce, seeds, herbs, and olive oil.

Related posts:
05/03/2022 Diet & Food Comments Off on The Mediterranean Diet Has One Big Flaw No One Talks About
Diets News