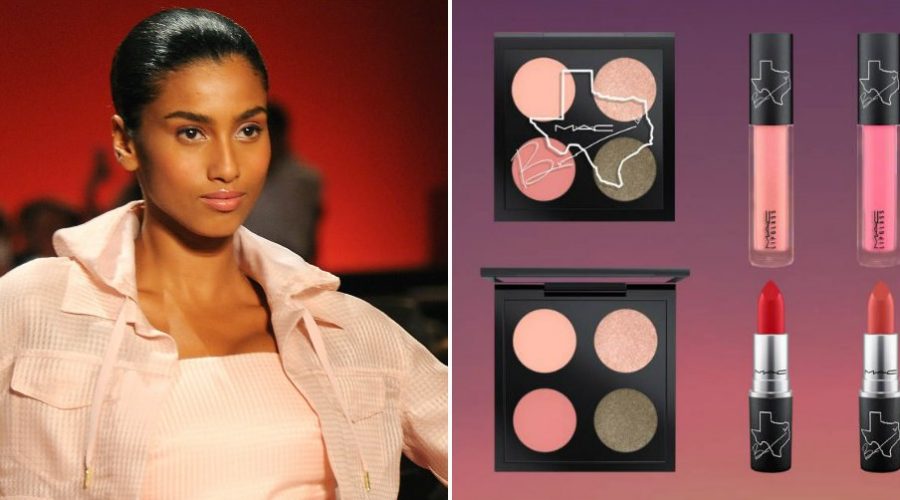 The color pink was a recurring theme at Brandon Maxwell’s Spring 2019 runway show: The clothes, for one, the big “Bs” hanging on the walls of his Texas tailgate-themed runway (complete with cans of beer, folding chairs, and guests sitting on bubblegum-colored Yeti coolers), and lastly, the makeup on the model's faces. The lids, cheeks, and lips of runway stars like Gigi and Bella Hadid, Lily Aldridge, and Joan Smalls were all coated in soft shades of pink and rose, using products from Maxwell’s first collection with M.A.C., which debuted at the show and is now available for purchase on M.A.C.'s website.

Makeup artist Tom Pecheux dipped into Maxwell's eye shadow palette to create the look for the show. After lining the eyes with a violet-colored pencil, he and his team swirled their brushes into a mix of Magic Mamaw (the dusty rose shade from the Dot's Dot palette) and M.A.C.'s Pink Swoon Blush, buffing the mixture over the lids and taking it up to the creases of the eyes. They curled the lashes, coated them in mascara, and then used M.A.C. Iridescent Silver Dust — a loose shimmer powder the brand is bringing back from the beauty dead — to trace the inner corners of the eyes and highlight the cheekbones.

The models' lips were then outlined and filled in with M.A.C. Whirl Lip Pencil and topped with a mix of Baby B Lipglass, from the Brandon Maxwell launch, and Pagoda Cremesheen Glass, which is a cool, frosted pink gloss that exists in M.A.C.'s permanent collection.

A Texas-themed show wouldn’t be complete without Texas-sized hair, which hairstylist James Pecis delivered using only three tools: Oribe Maximista Thickening Spray, the Oribe Round Brush, and the Dyson Supersonic Hairdryer. To achieve the volume for what he described as a "classic Texas blowout," Pecis saturated the models' hair with the Oribe Maximista Spray from roots-to-ends, blow-dried the product in using the round brush, and then repeating that all again. "By layering the Maximista on top of itself, the hair just keeps getting bigger and bigger," said Pecis, "and sometimes we even layer it three times."

The models with short haircuts or curls had their slicked back into chic chignons. “Brandon was one of the first major designers to bring on a lot of models into shows with natural-textured hair; this season, he actually wanted to straighten it and give them a slicked-back style, which was a surprise to me," said Pecis. "I did a little bit of a push back on it in the beginning but when we saw [the models] in the clothes during the fitting, they looked amazing.” To create the sleek knots, Pecis did a light brush-out first, then ran a very rich, moisturizing/heat protecting cream through the hair (which Pecis says is a top-secret, really awesome new product coming out soon from Oribe), blow-drying that in to stretch out the hair, and straightening it with a flatiron. "Then we're pulling the hair into a low ponytail and using Oribe Star Glow Styling Wax, which is an edge control, to keep down all the flyaways." The ponytail was then twisted into a rope braid, coated in more Star Glow, wrapped into a chignon, and pinned in place.

It also gave Pecis a chance to incorporate the gold, B-shaped bottle openers Maxwell gave him and use them as hair accessories. "It's a real bottle opener, you can full on use it," laughed Pecis. “They have a bottle opener on one end and a corkscrew on the other and we had to really secure them into the hair because they weigh a lot,” said Pecis. Not a surprise when paying tribute to a state where the bigger, the better.